You could discover a song on Pandora, search for more by the artist on Spotify, and get context from satellite radio DJs, or do it all in one place with Slacker. After hitting 4 million monthly users and 500,000 paid subscribers, Slacker today unveils a big redesign for its site, apps, and car integrations. It wants to claw mainstream users away from competitors with a “complete music service”.

Slacker has been, well, slacking. Despite starting in 2006 and offering a winning combo of customizable radio, on-demand streaming, and human DJ’d stations, it’s way behind the pack. Spotify recently hit 20 million users and 5 million paying customers (1 million paying in the U.S.), Sirius XM satellite radio has around 24 million paid subscribers, and Pandora has over 175 million listeners. Most people couldn’t even tell you what Slacker is.

So now Slacker is turning up the volume with a big marketing push for its new design that makes it simpler for the average music fan but retains its geeky customization. It’s pushing changes today for its website; mobile apps for iOS, Android, Windows Phone, PALM, and BlackBerry that come pre-installed on phones from top carriers, plus its apps built into cars from Ford, GM, Chrysler, Honda, and other manufacturers. It’s also improving its presence on home devices like SONOS, Sony and Logitech smart TVs, and will soon launch on Xbox. 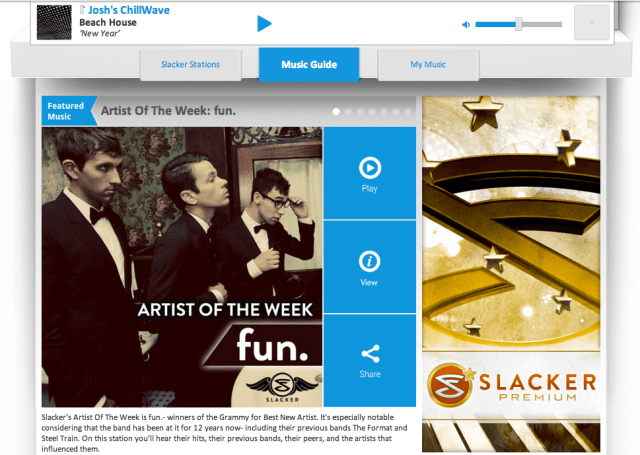 Rather than dumping you into its music player and asking you to do the work of building stations, the new Slacker Music Guide fills the homepage with recommendations. Discovery is critical when you have the world’s music library at your fingertips — 13 million songs from all the major labels and over 1000 indies in Slacker’s case. It’s something Spotify and others haven’t quite figured out yet, so it’s a huge opportunity for Slacker.

Each day Slacker Music Guide offers seven highlights from its catalog, including artists of the week, playlists, music news, and deep dives into events like the Grammys. You can instantly start playing music from these features, or click through for exclusive video interviews, concert clips, and bios. A persistent control panel lets you browse all this content without interrupting the music.

The Slacker Stations tab lets you pick from 300 stations DJ’d be real people. Beyond Pandora’s shallow thumbs up and thumbs down personalization, Slacker’s “Fine Tune” system lets you control sliders to hone in on older or newer music, discovery or your favorites, and popular or underground jams. You can also build your own stations from scratch, and pipe in news content and talk radio. Premium users can customize their sports news in a stunningly granular way. Say you only care about NCAA football, you can pick and choose what sports, leagues, and teams you want to hear about thanks to ESPN. Because there’s no way you give a damn about both hockey and tennis. 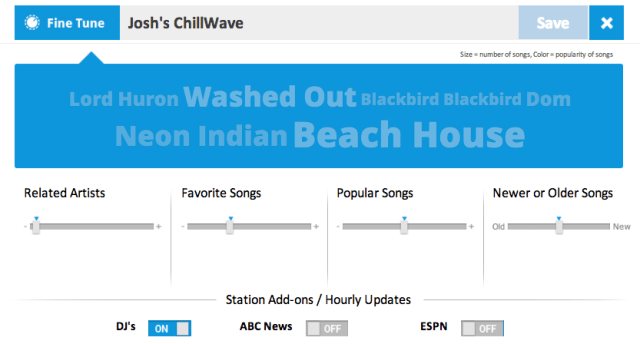 Most of Slacker’s service is free, though you can pay $3.99 a month for ad-free music. For $9.99 a month you also get Spotify-style on-demand service so you can search for and play any song you want any time. Slacker’s CEO Jim Cady tells me the service earns money even on free users, and pulls in solid margins from both tiers of paid customers. That means it doesn’t need exponential growth to be successful, but it wants to be bigger than it is today. To that effect, it’ll be buying ads, especially video spots, to win mindshare from its competitors.

I asked Cady if people are even willing to pay for music anymore, with piracy so prevalent. He explains

“There’s going to be a certain amount of people that are always going to want it to be free, but there are people willing to pay for differentiated content on their device. If you’re just saying ‘BLAHH, here’s the content [with no curation]’, that’s a really hard to thing to get people to pay for because there’s no added value. Where it shifts is if you can make it really simple, curate it, and combine it. Then I think customers are willing to [pay]. If I’m driving to work for 30 minutes and I want 10 minutes of ESPN, 5 minutes of news, and 15 minutes of music, that’s really hard to do on Bit Torrent.”

Overall I’m digging the new Slacker. It manages to pack in the power of several distinct music services without seeming too bloated. Some stuff is certainly buried, and being an all-in-one service can be tough to brand, especially with a pretty crummy name. Maybe a rebranding was in order, but alas, this music service will Slack on.

One thing’s for sure. The Fine Tune system is a huge win for people who do a lot of listening. Most importantly, I found the Slacker Music Guide to be much deeper than the discovery on other services which are mostly just charts and editor’s picks, but don’t give any context or follow-up reading material.

Slacker might be the best bangarang for your music buck. Instead of having to pay for subscriptions to multiple services, $4 or $10 on Slacker gets you an earful. It might not have the catalog depth of Spotify, or the clean fire-and-forget feel of Pandora, but Slacker deserves to be more popular than it is.

You can check out a quick video demo of the new Slacker site here: