Editor’s note: Robert Weber is co-founder and senior vice president of new products at W3i. Follow him on Twitter @robertjweber.

In the mobile world, companies often live and die by metrics: “How are your monthly active users doing? What’s going on with your user retention? How many total downloads do you have?”

These kinds of metrics, which can have widely different implications, can make or break developers. Especially with the Silicon Valley mindset, driven by success stories like Instagram and Socialcam, that says “get users today, make money off them tomorrow.” With this mentality, user metrics often play a larger role than financial figures for some companies.

But what do they all mean? In mobile, daily active users (DAUs) is frequently the standard by which game and app developers are judged. However, the industry doesn’t really have a concrete definition of what a DAU is. Some analytics providers, such as Flurry, use a rolling average, where a user is considered active if they’ve opened the app at least once in the past seven days. Another part of the mobile market considers someone an active user if they’ve used the app on a particular day. To truly define success, the industry needs to settle on what an active user actually is.

Before we can really understand the best way to measure and report on mobile metrics, it helps to understand the general habits of mobile users. W3i, which works with hundreds of mobile developers, sees a lot of data on how people interact with mobile apps.

The first thing to consider is that mobile developers can expect to lose about two-thirds of their users on day one. Our data shows that on average, most apps have a retention rate of 31 percent after the first day. In any other business, losing such a significant chunk of your audience so early would spell disaster, but that’s not the case on mobile. 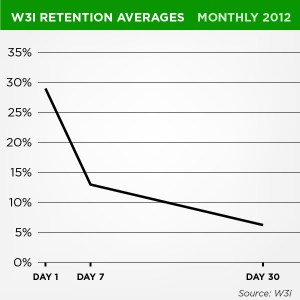 After the first day, developers can expect their user retention to even off slightly but still decline steadily. After seven days, the average user retention for an app drops by about half to 14 percent. By the end of the first month, an average of 6 percent of users will still be interacting with the app.

With such fickle mobile users, it comes as no surprise that mobile developers would want to judge an app’s performance by its DAUs. Who knows what your users will like in a day much less a month?

This brings up the issue of determining what kind of user you actually want. Although it may look better on paper, just because someone plays a game in a seven-day period, it doesn’t necessarily make him or her an active user. However, this DAU measurement is widely used and is artificially inflating the user bases of a lot of apps.

A user can only execute an in-app purchase or view advertisements if they open your app, so it makes sense to count active users as those who have started a session that day. In short, we should be classifying DAUs in the most obvious way possible: the number of people who actually used the app on that particular day. This figure most accurately represents the revenue potential of an app and is a better indicator of how it’s performing.

Once developers effectively understand what to look for in an ideal user, they need to understand how to design their app in a way that attracts those users and keeps their attention. Developers should iterate a few times and make sure their retention is stable. Once they are comfortable, they should pursue more aggressive forms of user acquisition. When acquiring users, developers should benchmark their sources and how each performs to determine where most of their revenue is coming from.

This model is especially effective in mobile gaming.

Mobile gaming has always been a world apart from console and PC gaming. While PC gamers may chug away playing World of Warcraft for hours in their living rooms, and console gamers will spend entire days cooped up slaughtering Covenant in Halo 4, mobile gamers have different playing schedules and usage habits. They’re more likely to clock in their playtime on buses, waiting in lines, and upsetting flight attendants before takeoff.

It comes as no surprise then that the shelf life of a mobile game differs significantly from that of a console game. While AAA console games can keep users engaged for months on end, mobile games almost always see a significant drop in users after day one.

There are also some best practices developers can use to make sure the DAUs they’re seeing are being monetized to their fullest potential in their game or app:

As the mobile market continues to mature, what metrics are and aren’t important will continue to become apparent. In the meantime, developers need to consider which numbers they really want to focus on.