Tapping into the growth of online education, Skillshare launched in 2011 on a mission to build a digital marketplace for knowledge. Yet, instead of going in the direction of traditional online education or the new generation of MOOC platforms like Coursera and Udacity, Skillshare eschewed hosting classes in traditional education subjects to instead offer classes that teach people real-world skills that they can apply to their professional or personal projects.

At launch, however, Skillshare limited users to participating in classes that took place in their local area, but last year, the startup added hybrid, online classes to its platform, allowing teachers to create classes that are available globally and enable students to take live, interactive classes — on the Interwebs. Since then, the startup’s growth has accelerated, with the size of its classes growing from an average of 20 to 30 students to thousands, and teachers are now earning upwards of $30K per class.

Based on this growth, Skillshare announced today that it has added $1 million in funding from Zappos CEO Tony Hsieh’s new investment arm, Vegas TechFund. The new capital brings the startup’s total to $4.65 million, following the $3.1 million series A round the startup raised in August 2011, led by Union Square Ventures and Spark Capital. Hsieh also joins Founder Collective, SV Angel, Collaborative Fund, David Tisch and a host of other angels as Skillshare’s newest investor.

Skillshare founder Michael Karnjanaprakorn tells us that the startup plans to use its new capital to accelerate its international growth and beef up its team of 15, along with expanding its physical presence to new locations, including Las Vegas. The investment comes after Skillshare spent 2012 working with Tony and the Zappos team on his “Downtown Project” in Las Vegas. “We weren’t planning on fundraising,” the founder says, “but when Tony approached us, we couldn’t pass it up.” So, the team plans on working with Hsieh and company to build Skillshare’s presence in Vegas, where he says the “tech and entrepreneurial scene” is growing fast and where there’s a lot of untapped talent.

While Skillshare’s original model was successful in bringing on more than 5,000 teachers, investors like Hsieh see big potential in the startup’s new hybrid, online learning model, which gives it the opportunity to access a much larger audience. Today, all of Skillshare’s classes are live and interactive, offering students face time with teachers via live, online office hours and, unlike many in EdTech today, the startup is focused on projects instead of credentials.

That may seem dangerous to some, but Karnjanaprakorn thinks that the “skills-based market” is huge — that the “demand is there” — and that by focusing on project-based classes where students actually make things with what they learn in class, it can appeal to an audience that wants to learn outside the classroom. Skillshare also operates as an open platform, where anyone can teach a local, in-person Skillshare class and anyone can submit an application to turn their class into something that’s global and online, which the founder sees as a distinction from the “top-down approach to educational content” adopted by many of its competitors. Though clearly Udemy would beg to differ on that one, and it has the traction and funding to warrant it.

As to how it works: Teachers spend time designing the class and the projects that students will complete, with a syllabus that includes a combination of curated learning materials, online lectures and live, interactive office hours. Students can then engage in discussions, share and submit their class projects and get feedback on their work from teachers and classmates. Classes typically range from one to four weeks.

The enrollment of these classes range from hundreds to thousands of students, with the highest enrolling class at 4,400 students and its most-engaged classes submit hundreds of projects. In turn, the startup’s top earning teacher made over $40K teaching one Ruby on Rails class. Skillshare has launched 125 online classes to date, with 45K students enrolled in those classes since online classes were added in August of last year. 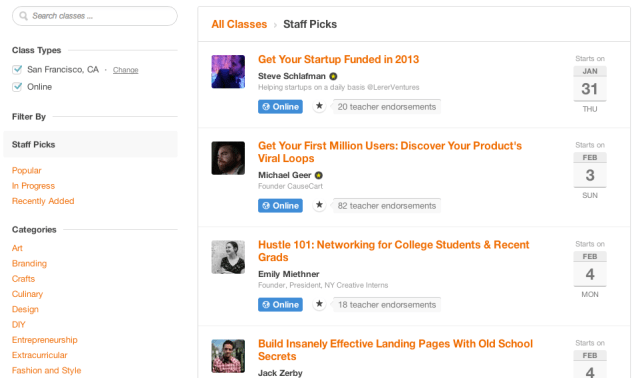 That’s nowhere near the level of enrollment platforms like Coursera and Udemy have seen over the last 12 months, though in truth Skillshare has only been offering these classes for a fraction of the time, and there’s reason to believe that it has plenty of room to grow.

Not surprisingly given the popularity of online course platforms, specifically those with a high degree of learn-to-code and design content — take Lynda.com and its $100 million-plus raise, for example — Skillshare’s most popular classes typically fall in design, technology and entrepreneurial subjects. But the Skillshare founder says that the platform has recently seen growing interest in classes that range from photography and jewelry-making to cooking and “getting in shape.”

Because teachers get to choose the price at which they offer their class, costs range anywhere from free to thousands of dollars, though Karnjanaprakorn says the majority fall between $20 and $25. For each student enrollment, Skillshare takes a 12 percent transaction fee, which is its main source of revenue. As to how the business side has been faring, although the founder wouldn’t share specifics, he did say that gross transactions increased 362 percent from the end of 2011 to the end of 2012, while online classes have grown 47 percent month-over-month since August.

While online education is anything but new, these new MOOC platforms and open, skill-based learning resources have grown by leaps and bounds over a few short years — both in terms of adoption and quality. Because there’s a lot of experimentation in the space right now, it’s still not yet clear which models will be most appealing (and useful) to students in the long run.

Those focused on integrating technology into the classroom want to see more robust video capabilities and analytics to help teachers teach the Common Core and students learn it. But Skillshare, the founder says, isn’t interested in focusing on tests or quizzes, it wants to be the platform where students can build “real things” and demonstrate their comprehension through projects, not the typical assessment models endemic to higher ed institutions. 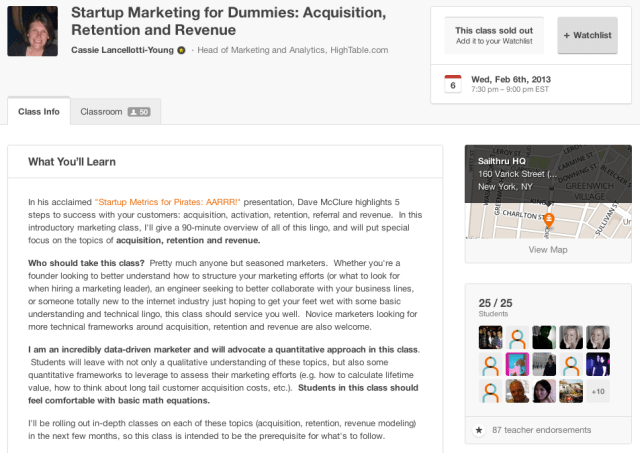 There seems to be a lot of room for this approach, as continuing education and corporate education heat up, many want to continue learning in subjects they were fascinated by but didn’t get to study in school. Or, the alternative, they’re at work, and they want to supplement their knowledge in an area that will help them do their job better. There’s no reason that each MOOC model can’t be successful, and huge, in its own right.

The other nifty part of Skillshare’s experience is that all of its livestreamed material is automatically recorded and accessible to students — forever, the founder says — so that they can learn at their own pace. (Here’s an example of a Meatball Making class. Yes, Meatball Making.)

In the immediate future, Skillshare plans to focus on increasing the amount and diversity of its classes, along with expanding into new cities, both at home and abroad. Right now, the majority of the site’s users are from the U.S., but with the launch of online classes, the top 20 cities on Skillshare now include internationals like London, Toronto, Sydney, Singapore and Bangalore. With its new capital, the startup wants to expand this list and, hopefully I would add, begin working on the addition of new languages.