Early on in the Netflix original series House of Cards, you see Kevin Spacey get his hands dirty. As Representative Francis Underwood, he doesn’t suffer fools and he doesn’t tolerate weakness. The opening scene shows Spacey performing a mercy killing of sorts, removing the pain of a beast not fit to continue living. It’s an apt metaphor for Underwood’s upcoming crusade against a presidential administration that has turned its back on him.

But the scene could also be read as a metaphor for the show itself: Just as Underwood seeks to show up the incumbent powers that be, so too is Netflix attempting to shake up the TV distribution model. And in both cases, you’re rooting for the underdog.

Spacey’s Underwood is the House Majority Whip and already has a tremendous amount of power. But when spurned for the position of Secretary of State, he puts a plan in motion to not only unseat the person chosen instead of him, but to cause further headaches for the administration that passed him over. The first two episodes are an unraveling series of events that have Underwood stealthily undermining the new president during his first several days in office. 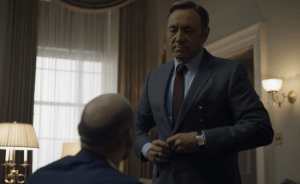 Altogether, the ensemble and script makes for really good TV, even if you’ll never watch the show on any broadcast or cable network. That’s because Netflix cut a reported $100 million check to production house Media Rights Capital for exclusive rights to stream the program to its subscribers. Like HBO, which has spent the last two decades winning over subscribers with really high-quality original content that can only be seen on its network (or, if you’re willing to wait, packaged for DVD and Blu-ray sale), Netflix is hoping that it too will soon be defined by shows that users can only see by paying $8 a month for its streaming service.

House of Cards wasn’t the first exclusive series Netflix put on its streaming service, and it won’t be the last: There are at least three others in development, including the reboot of Arrested Development, Eli Roth’s horror series Hemlock Grove, and Weeds creator Jenji Kohan’s prison comedy Orange Is The New Black.

But House of Cards is probably the most significant original release that Netflix will see over the next year. Unlike Lillyhammer, the goofy fish-out-of-water comedy that planted a New York mobster in Norway, this series was created exclusively for Netflix and features serious star power in Spacey and Fincher. And while viewers are no doubt waiting for the coming Arrested Development revival, most have some idea of what to expect from that project. 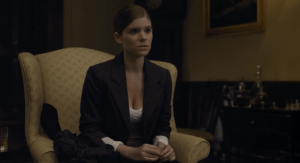 House of Cards, though, bears the burden of being the first real serious piece of original programming that the online streaming company has licensed exclusively. It is, one might say, a defining moment for the company.

Ever since it was announced, critics have questioned whether Netflix would be able to pull off an original show with HBO-like quality. While everything looked good on paper, including the involvement producer/director David Fincher and actor Kevin Spacey, there are no shortage of announced series that had viewers salivating, only to be let down once they were actually able to see the end result. Even HBO has had a few blunders of this sort — just check out the network’s horse racing extravaganza Luck, which combined the talents of David Milch and Michael Mann, and starred Dustin Hoffman. It was cancelled after just one season.

At the same time, Netflix famously stepped back during the production of House of Cards, something that few traditional networks are willing to do. The common belief among those in the TV business was that Netflix was making a big, risky bet by paying upfront for two seasons of a show that didn’t even have a pilot, and then letting the production studio do its job with little interference.

But if the first two episodes are any indication, Netflix’s bet on House of Cards should pay off handsomely. The show not only lives up to the production quality that we’ve come to expect from cable TV — in writing, acting, and directing — but it will probably surpass the expectations of many.

That’s not to say that the show is perfect: Kevin Spacey as a Southerner is a tough sell, and his affected drawl can be grating. The fictional Washington Herald isn’t a great representation of the modern news room, and the balance between the print reporters and the online ambitions of newcomer Barnes seems a little off. In the initial few episodes, the motivations driving certain characters are a little over-simplified. But overlooking those issues — which, frankly, are present in most TV pilots seeking to get a viewer up to speed in the fictional world they weave — House of Cards is very good. At least, the first two episodes were.

All 13 episodes of the show will be made available soon enough, as the series premieres February 1. And when it does, viewers will be able to make up their own minds about whether or not House of Cards lives up to the hype.