Netflix had a stellar fourth quarter, posting revenues and subscriber numbers well above analyst estimates. That has got investors excited again, driving the stock up 25 percent in after hours trading.

In its fourth-quarter 2012 earnings report, the company announced $945 million for the quarter, up from $876 million last year. Wall Street’s consensus forecast for the quarter was $935 million. It also reported earnings of 13 cents share, compared to earnings of 64 cents a share in the same quarter last year. That was well above analyst expectations for a loss of $0.12 a share.

As in previous quarters, much of Wall Street’s focus is on Netflix’s domestic subscriber growth. That’s especially true for the fourth quarter, which is typically the biggest for adding new users, thanks to users signing up during the holidays and receiving new, Netflix-compatible gadgets as gifts. Netflix failed to disappoint, as it added 2 million U.S. subscribers for the quarter, compared to 220,000 in the prior year’s fourth quarter. It’s above its own forecast of 1.3 million to 2 million new adds during the period.

Netflix said its improved domestic subscriber numbers were due to users buying new connected devices in the quarter, as well as improved voluntary and involuntary retention. That included improved payment processing, as well as “steady improvements in service and content relative to the broad array of video choices available.” Netflix believes that it will be able to keep subscribers on board also thanks to continued growth in the amount of content viewed by each member. It expects to carry its domestic subscriber momentum into the first quarter, adding 1.7 million users during the current period.

Overseas, Netflix added 1.8 million new subscribers, bringing its total customer count overseas to 6.1 million. That growth has pushed international revenue over $100 million for the quarter. Its segment loss in international was higher than the previous fourth quarter, at $105 million, but lower than its forecast of $113 million. That was due to higher-than-expected subscriber and revenue growth. Netflix expects losses to decline as subscribers grow beyond content costs.

Its international business is being helped by improved payment infrastructure in Latin American markets like Brazil, as well as the addition of popular content like “The Hunger Games” overseas. But while it has started to reap the benefits of its existing markets, the company says it will not look to enter new markets anytime soon.

Meanwhile, subscriber losses in its DVD business continued to slow. Netflix lost 380,000 DVD subscribers in the quarter, ending it at 8.2 million. As time has gone on, Netflix’s DVD business has been losing subscribers at a sequentially lower rate, suggesting that it could be stabilizing. As a result, Netflix says the segment delivered $128 million in contribution profit, or 50 percent of the contribution margin.

All of that good news has meant that Netflix is once again in the good graces of investors. The company has seen volatile trading over each of the last several earnings reports, and this quarter was no different. The company had seen double-digit percentage losses in three of the previous four trading sessions after earnings dropped, and double-digit percentage growth in one quarter of the last four. This quarter, shares were up some 30 percent in the hour after the earnings report dropped. 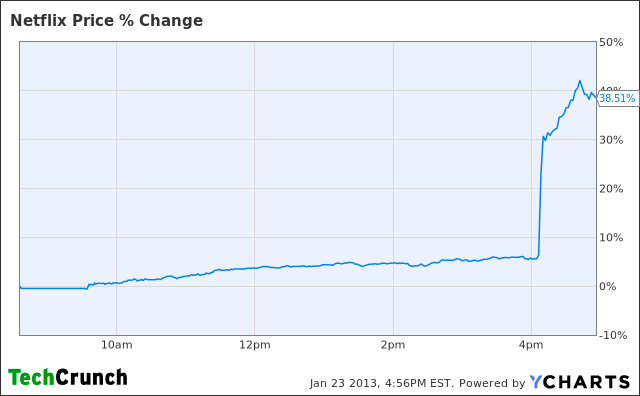