You know how some naysayers still like to dismiss Twitter as nothing more than a time wasting website where people talk about the sandwich they’re eating? Here’s another rebuttal for them.

A new survey from the Digital Policy Council (DPC) shows that 75 percent of the world’s heads of state have a presence on Twitter. The DPC’s annual study evaluates a total of 164 countries, and found this year that 123 of them have a head of state that is on Twitter, either with a personal handle or an official government one. That’s up significantly from 2011, when 69 out of the 164 countries had a Twitter presence. (It bears mention that there are a total of 193 states recognized by the United Nations, so we’ve reached out to the DPC for more details on which 164 countries they choose to monitor and why — we’ll update this when we hear back.) 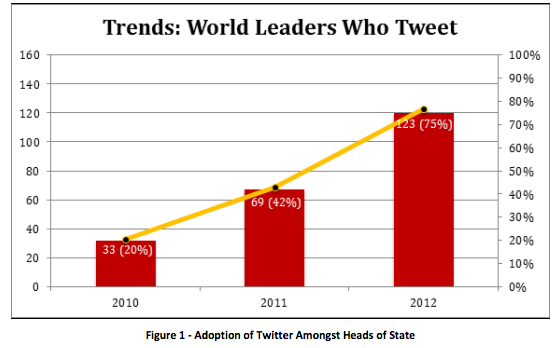 Twitter is perpetually setting new records in terms of users and activity at an almost annoying pace, and it is said to be increasingly turning all that usage into serious revenue. So, while Twitter still has a bit of a reputation for being frivolous — and it is still a great place for frivolity — it makes sense that some of the people with the most serious of occupations are finally starting to come around to the value of the platform.