Facebook has just announced its newest standalone app called “Poke” which lets people send photos, videos, pokes, or text Facebook messages to their friends that expire after a few seconds. The launch confirms AllThingsD’s report from earlier this month. Poke is a big move into the ephemeral messaging space for Facebook, and it could give it even more data on who your closest friends are.

Facebook was convinced it needed an expiring messages app. Snapchat’s iOS and Android apps were gaining serious traction with young users. Over 50 million photos are getting shared on Snapchat each day for a total of 1 billion traded on the service compared to Facebook’s 300 million photos shared a day. Clearly there was something magical about self-destructing media.

Seems that Facebook didn’t want to wait for Snapchat to get so big it’d have to make another costly acquisition like Instagram and instead decided to compete early. We heard rumors that it had made overtures about acquiring Snapchat, but when the founders decided to stay independent, Facebook built its own version in just 12 days. Why would Facebook’s Blake Ross share that fact? Beacause it’s that kind of tenacity and lack of red tape that attracts great talent to come work at Facebook. It’s also a signal to startups about just how fast Facebook can steamroll them.

How Do You Poke? 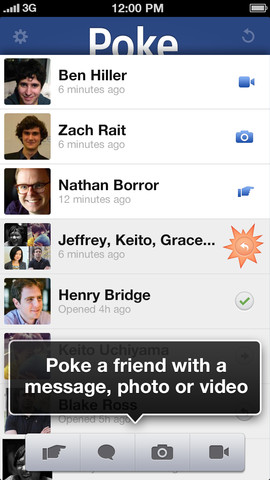 The Poke app brings the classic contentless message into the mobile media-sharing age, but it’s actually a completely separate feature. Facebook explains that the app is designed to let you contact friends from wherever you are and show them what you’re doing. Here’s how the announcement describes how the app works:

“With the Poke app, you can poke or send a message, photo, or video to Facebook friends to share what you’re up to in a lightweight way. You can poke an individual friend or several at once. Each message expires after a specific time you’ve set, either 1, 3, 5 or 10 seconds. When time runs out, the message disappears from the app. “

Essentially you pick a type of message to send — either a poke, text, photo, or video — and choose a friend or multiple friends to send it to. You can then set the expiration timer, add a location, overlay text or draw on a photo, and then send it. Recipients get a push notification with a little voice saying “Poke!”, open the Poke app, see your name and what type of message you sent, and then hold down on the message thread to view the content until the timer runs out and the message disappears.

The app is all mobile and completely separate from Facebook’s other apps and desktop site. If you Poke someone on Facebook.com by going to their profile, they won’t get that Poke in the App, and nothing you do in the app can be seen outside of it. There’s currently no way to view Poke app messages on the web.

For now the Poke app is iOS only, but you can expect a release for Android soon as Snapchat is already there. Poke was built in under two weeks by a small team led Facebook’s veteran Director of Product Blake Ross, so there’s probably a lot of development still left to get it where Facebook wants it to be. There’s a chance that self-destructing media could make its way into Facebook’s main app, as the company has said that power users of its standalone apps like Camera and Messenger are guinea pigs for features it’s considering for the flagship apps.

As for privacy, Poke simply links back to the main Facebook terms of service, which would imply Facebook can save all the content from the app until you delete your account. However, a Facebook spokesperson tells me “All Poke messages are retained for two days after being read, to help facilitate abuse reporting.” After that their encryption keys are deleted making unreadable. The statement references the fact that users can flag messages as inappropriate if they’re getting nude or otherwise alarming Pokes. Facebook also gives paranoid Pokers have the option to clear their inbox so any unread messages are instantly destroyed.

A Poke To The Gut For Snapchat

Poke is pretty unabashed clone of Snapchat. Both apps let you draw and overlay text on photos before you send the little timebombs. They also notify the person you’re chatting with if you take a screenshot of what they sent you. For a quick reference, check out this chart comparing the features of the two apps.

Poke adds some useful extras. It offers simple text messages, in addition to video and photos. You can add a location to where you record a Poke message. Also, in Poke you can have group conversations, whereas on Snapchat you can message multiple people at once but not keep them all in a thread.

One thing Poke does lack is the ability to message people in your phone book, not just Facebook friends. In terms of design, Poke’s biggest flaw right now is a slight delay from when you hold on a message to when the content appears and the timer starts ticking. This caused me to lift my finger to try tapping again, canceling the previous view. Snapchat’s quickness is highly revered by its users, and Facebook will have make Poke more responsive, but otherwise the app feels well crafted.

Poke is a big problem for Snapchat, which is unfortunate for the small, scrappy team out of Stanford. GigaOm reported Snapchat is in the middle of closing a big round of funding led by Benchmark Capital, and our sources indicate it’s raising over $10 million at a $70 million valuation. That value might fluctuate with Poke’s release. It certainly validates the space, but only by bringing an 800-pound blue gorilla into it. It seems Snapchat CEO and co-founder Evan Spiegel see this as confirming his company is working on something important, as his response to the launch of Poke was “Welcome, Facebook. Seriously.” 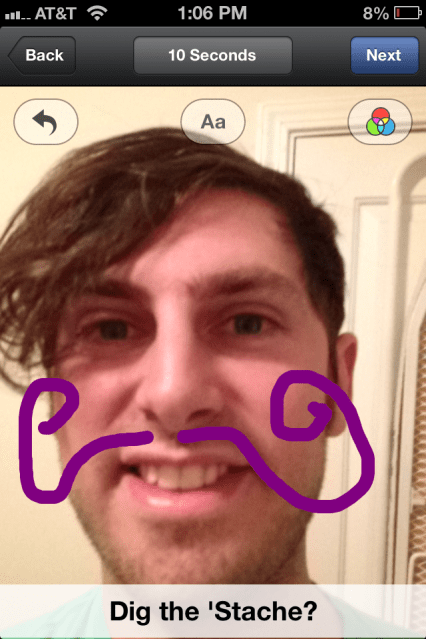 Poke has some big advantages it will bring to the fight with Snapchat, most specifically in distribution. Facebook does some nifty things to onboard people. If someone else uses the Poke app to send you a message, but you haven’t installed Poke yet, you’ll get a push notification from you main Facebook app asking you to download Poke. Facebook also routinely cross-promotes its standalone apps with banners at the top of its primary apps. For example, a download button for Poke at the top of Facebook for iOS which has around 125 million users could drive tons of installs.

The question now is whether users will be comfortable sharing on Poke. Snapchat’s outsider status gave it some street cred, especially amongst teenagers who view Facebook as a tool of the generation before them. After Facebook’s privacy troubles over the years, some people don’t fully trust it.

If Snapchat actually was mainly a sexting app, it’d probably be fine despite Poke because people would be scared to intermingle racy photos with their widely accessible Facebook presence.. But it’s not all about sexting. Snapchat is mostly for sharing goofy photos that months or years later might seem inane but at the time are hilarious. Using Poke for a few minutes I already get the feeling it can handle this silly and addicting use case well. I’ve already gotten a few laughs out of it.

Poke could successfully slow the growth of Snapchat and deter others from entering the space, which would keep more sharing in the Facebook ecosystem. Inevitably the question is how Facebook will make money on Poke. Right now there’s no ads. One day there might be, but its launch seems more focused on creating something fun for users while boxing out a potential disruptor. Mark Zuckerberg pulled the rug out from under Myspace, and he doesn’t want anyone doing the same to him.

Even if it doesn’t earn money directly, Poke is very important to Facebook. The people you send ephemeral messages to are often your closest friends. Facebook needs to know this intimate social graph to be able to tune its news feed and other parts of the service to show you the most relevant content. Because really, if you send someone a photo of you with a purple mustaches drawn on top, you probably want to see what they’re sharing with everyone else.

You can download Poke from the App Store here.

And there’s a cute little Easter Egg in it. If you drag your messages list all the way up, you’ll see the text “I’ll find something to put here”. This is the same text Mark Zuckerberg left in the bottom of the Facebook.com footer in the early days of the site.