IFTTT has received $7 million in funding to build out its capability for customers to automate the flow of notes, photos, text files and other media between different services in a way that gives the user the ability to control information and how it flows.

Andreessen Horowitz led the round with NEA and Lerer Ventures also participating. The company has now received a total of $9 million in funding.

This capability to control how data flows is incredibly important as more devices connect to the Internet. Any device, machine, you name it, needs a way to connect to the web. IFTTT wants to be that connector for the emerging Internet of Things universe.

IFTTT works like this. You set up a channel — there are now more than 60 available, such as LinkedIn, Dropbox, RSS feeds and a host of others. Then you choose a trigger for where to send the picture from Instagram or the feed update. For example, I might set it up so the notes I create get sent to Dropbox. IFTTT calls these connectors recipes.

In a blog post, Andreessen Partner John O’Farrell said that customers have created two million recipes to connect web sites and apps. Users have created tens of thousands of recipes that they have shared on the IFTTT site. 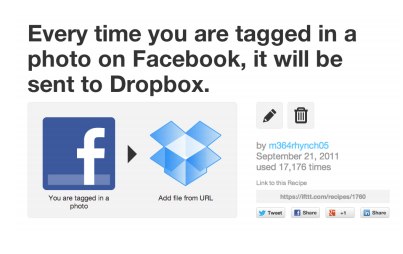 IFTTT CEO and Founder Linden Tibbets founded the company in 2010. He said the funding will go to extending its channel platform that it first began developing earlier this year. I wrote about the channel program when it added Box.com. It was the second channel that had the business customer in mind. IFTTT also has a Yammer  channel as well.

Box on IFTTT launched with three actions on par with its popular Dropbox Channel. Users can upload a file, create a text file, and append a text file. The Box channel can be used to archive Twitter messages, photos, blog posts or even data from other services.

The next step is to build out a channel for people to add any service that has an API. The goal: to create a developer community that will build new services on top of the IFTTT platform.

IFTTT is now primarily a consumer service, but the platform will extend its scope to the enterprise, opening new possibilities for SaaS providers and enterprise app makers.

IFTTT does compete in a tight space. Sarah Perez wrote just this week about Wappwolf, an IFTTT-like service that includes not only online file storage services like Dropbox, Evernote, Google Drive, Skydrive and others, but also photo-sharing sites like Instagram, Flickr, Picasa and Facebook. Other services that play in this market include Dropbox Automator and Google Drive Automator.

But IFTTT is by far the leader and has well-defined a metaphor for moving objects between places much as we do in the physical world.