Twitter has confirmed it’s rolling out a much sought after feature that lets users download their entire Twitter archive — aka every tweet you’ve ever sent, starting with what you had for breakfast back in 2007 — to store wherever you fancy, and browse through at your leisure. The feature includes tweets and retweets, and users will be able to view their archive output by month, or search via keyword, phrases, hashtags and usernames.

Today, we’re introducing the ability to download your Twitter archive, so you’ll get all your Tweets (including Retweets) going back to the beginning. Once you have your Twitter archive, you can view your Tweets by month, or search your archive to find Tweets with certain words, phrases, hashtags or @usernames. You can even engage with your old Tweets just as you would with current ones.

Twitter added that the rollout is taking place “slowly” — noting that it will be “months” before it reaches Twitter users in some parts of the world — and warning users to be patient if the option doesn’t appear in their Setting today. A “small percentage of users whose language is set to English” will be the first to get the feature, it added:

If you don’t see that option in Settings today, know that it’s on the way! We’re rolling out this feature slowly, starting today with a small percentage of users whose language is set to English. Over the coming weeks and months, we’ll make it available to all users around the world, for all the languages we offer. We’re really excited to bring this feature to everyone, and we appreciate your patience as we work to do so.

Twitter’s blog post reveals work on the archive feature started during one of its quarterly Hack Weeks.

So how do you know if you are one of the lucky ones? Check under Settings for a ‘request your Twitter archive’ option. “If you do see it, go ahead and click the button. You’ll receive an email with instructions on how to access your archive when it’s ready for you to download,” says Twitter.

The feature has been on the cards for months, with Twitter CEO Dick Costolo hinting last month that the ability to download tweets would arrive before the end of the year — so long as Twitter’s engineers didn’t mutiny at that development schedule.

Signs that the company had started rolling out the Twitter archive feature emerged on Sunday when several Twitter users reported finding the option in their Settings. Twitter user @kessler also sent us a series of screengrabs as he went through the process of downloading his tweets.

The download feature brings Twitter in line with companies such as Google and Facebook who already offer data download features to users of their products. Giving users the ability to take away the data they have contributed to a service is both a courtesy and a credibility building exercise — showing that while a business owns a service, it understands that it does not own its users’ data.

One reason Twitter may have had for being slightly slow to give people the tools to go digging back through their tweet history is that if you’re spending time looking at old tweets, you’re not going to be composing new tweets. But the company has come up with a neat solution to this: it’s encouraging Twitter archivists to retweet old favourites — and hashtag them #TwitterArchive — so an old tweet perched in the past gets to fly again. Now that is clever. 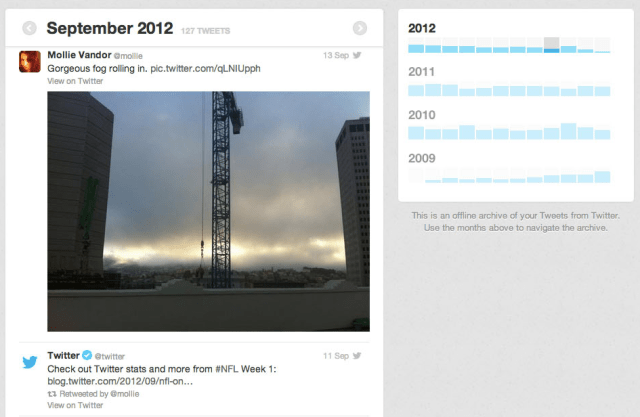