Each month 250 million Facebook users tag posts with location. Today that data goes to work for you in a major revamp of Facebook’s Nearby feature for its iOS and Android apps. Built by Josh Williams and the Gowalla team that Facebook acquired last year, Nearby helps you discover nightlife, shopping, restaurants and more based on the Likes, check-ins, and recommendations of your friends and other users.

I got to spend the weekend trying out the feature that will rollout first to 1 percent of users later today and all users soon. Here I’ll review Facebook’s impressive first attempt at local business discovery, discuss its potential to earn money while delighting users, and explain why it spells trouble for apps like Yelp and Foursquare. 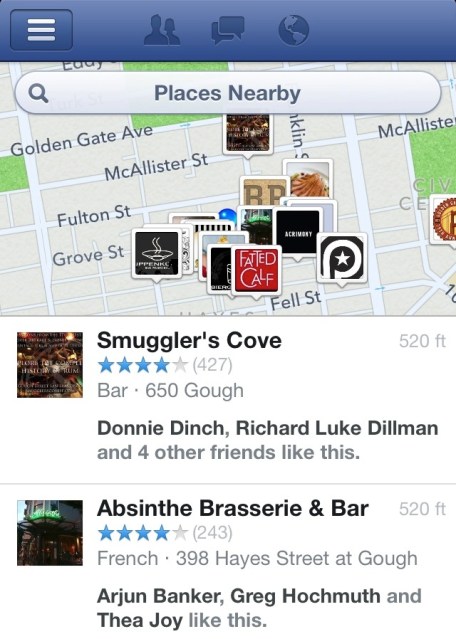 Starting today when you open the Nearby tab from the Facebook for iOS or Android navigation menu, you won’t just see a list of Places to check in like before. Instead you’ll see a relevancy-sorted list of local businesses and landmarks that Facebook thinks you’ll be interested in. Similar to how it ranks stories in the news feed, Nearby looks at a ton of signals to determine what to show you first, including friends who’ve Liked a business, checked in, left a short text recommendation, or given the Place a star rating.

Along with an omni-list of locations, you can search for specific spots or browse by categories, including Coffee, Hotels, Outdoors, and Nightlife. There’s also detailed sub-categories so you can browse for Mexican restaurants, brunch, or sports bars, or Shopping retailers such as clothing, electronics, groceries, or books.

Results are shown on a split-screen map and list, and they give you plenty of context so you know what you’re looking at. Each listing shows a business’ name, category, profile pic, address, distance, star rating, and the names of friends who Like it. Move or resize the map and you can see the top results for any area.

Tap into one and you’ll see Facebook’s brand-new mobile design for Places Pages that offers quick access to business hours; buttons to Like, call, or check in somewhere; recommendations from other users; and a slick way to leave your own hot tips on the best dishes or nights to drop by. If you want to visit, a directions button opens your device’s default maps app. You can also toggle over to see the Place’s Timeline of recent updates.

Yes. Nearby is a truly mobile-first interface designed for browsing over typing. I’ve been very impressed by how well the relevancy-ranking algorithm works. I’m big into nightlife and so are my friends, so it was great to see Nearby pulling out local spots I’d dig like concert halls and outdoor bars. 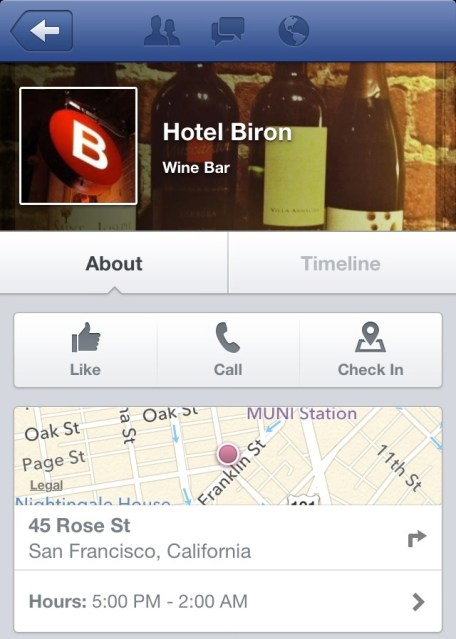 By combining rankings and recommendations with Likes and check-ins by friends, I not only know a place is high-quality, but that’s it’s my style — something Yelp can’t really do. I had no idea there was a Creole restaurant down the street from my apartment, but with four-stars and a Like from a good buddy, Nearby found me something I’m excited to try.

In your own city, Facebook’s plentiful data provides accurate suggestions of what to check out, but it could also be a big help when you’re travelling. You could follow the tracks of the few friends you know who live where you’re visiting, or go by the ratings and recommendations of strangers. Facebook began letting people leave recommendations on the web in mid-2011 and through the mobile website in January. Now those are turning up in Nearby to help you figure out what to order or what to do at a place once you’ve decided to go there.

There’s certainly some kinks to fix. Spots in the “Outdoor” category sometimes are actually indoor venues. If you search for “Mexican” it will bring up the option to browse the Mexican restaurants category, but Facebook doesn’t know to do the same if you search for “taco.” It just gives you restaurants with “taco” in the name.

What’s Next For Nearby?

Right now Nearby is very static. It doesn’t even show you Places where friends are currently checked-in. That has to change. If a friend is checked-in at a Nearby Place, that should be called out in the results and used as a strong signal of relevance.

Facebook Events is also sorely missing from the experience. Facebook should work into Nearby results Events that I’m invited to, as well as Suggested Events that my friends are attending so I don’t miss a party down the block.

For now there are no ads in Nearby, but there sure are plenty of ways Facebook could add them. Most obviously, Facebook could let businesses pay for sponsored placement in results. “Your business would show up fourth, for a fee it will show up first”. On mobile where people don’t have time to do a ton of comparing, those ads could drive serious foot traffic and sales for businesses and become an important revenue stream for Facebook. Similar ads could show up if you search for a business in Nearby.

Facebook could also start pushing hyper-local ads into the standard news feed. If Facebook detects you’re within a half mile of a business it thinks is relevant to you, it could show you an ad linking to that place’s Nearby mobile Page.

Should Yelp, Foursquare, And Other Local Discovery Startups Be Worried? 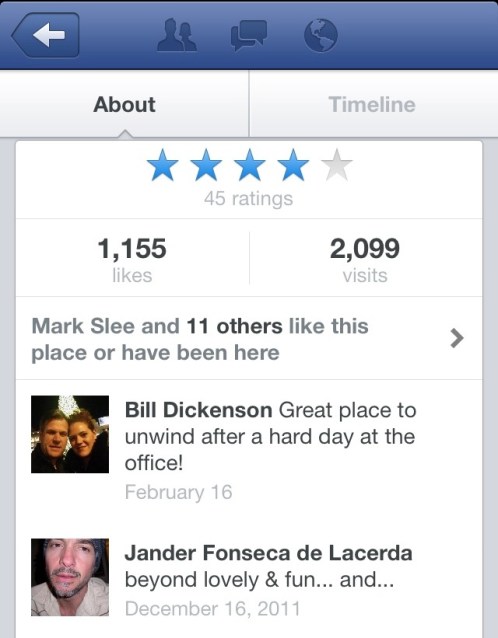 Yes. Simply put, people are already spending so much time on Facebook that they might be happy to stay in it to find local businesses rather than opening another app. Local discovery services only work if you have plenty of data. Foursquare still only has around 30 million users. Facebook’s location services have 250 million users a month. It might not have the long-tail of reviews or the advanced spam protection of Yelp, but it knows where your real friends go.

The feature is also Facebook’s first big foray into search. At Disrupt, CEO Mark Zuckerberg got investors salivating by talking about how Facebook is uniquely positioned to addresss questions you’d normally ask a search engine. He gave the example of wondering “What sushi restaurants have my friends gone to in New York in the last six months and Liked?” Nearby has the answer.

In the end, people want recommendations they can trust, and those don’t come from strangers. They come from people you know who share your tastes — your friends. Nearby lets you discover the world through their eyes.

To try out Nearby, download the latest versions of the Facebook for iOS or Android app that were released last week, and later today try sliding out the navigation menu and tapping “Nearby.”