Apple’s iPhone and iPad devices are still the most desirable platforms for developers, according to the latest Appcelerator/IDC quarterly report, grabbing 89 and 86 percent of interest respectively among a pool of 2,749 respondents. Android isn’t far behind in smartphones, with 77 percent of interest, but trails considerably on tablets with 64 percent. The good news is that most developers are looking to build cross-platform apps instead of targeting just one, with 49 percent of respondents aiming for two platforms, and 31 percent going after three different operating systems.

Overall the interest in iOS and Android is pretty much unchanged from developer opinions expressed in the Q3 2012 Appcelerator/IDC survey, with Apple gaining two and four percentage points for iPhone and iPad respectively among devs who are “very interested” in their platforms, and Android losing two points for tablets and gaining two for phones. But the big difference is in cross-platform interest, which sees 88.4 percent of mobile devs expressing intent to develop for two or more mobile platforms in 2013, vs. 68.9 percent saying the same thing in the previous quarter.

Appcelerator and IDC break out interest in Nexus devices as its own category, and that’s where Android is seeing strong growth. 53.8 percent of developers said they were “very interested” in targeting Nexus devices, which far outweighs the interest expressed in fully separate mobile platforms like BlackBerry and Windows Phone. Developers seem to see Google taking a stronger role in Android hardware, especially with tablets, as a positive thing, with 35.1 percent saying that other Android manufacturers should take the Nexus line as a model for their own devices going forward, vs. 26 percent saying Google is just another device maker, and only 7 percent expressing any kind of negative sentiment about how Google making hardware affects the overall ecosystem. 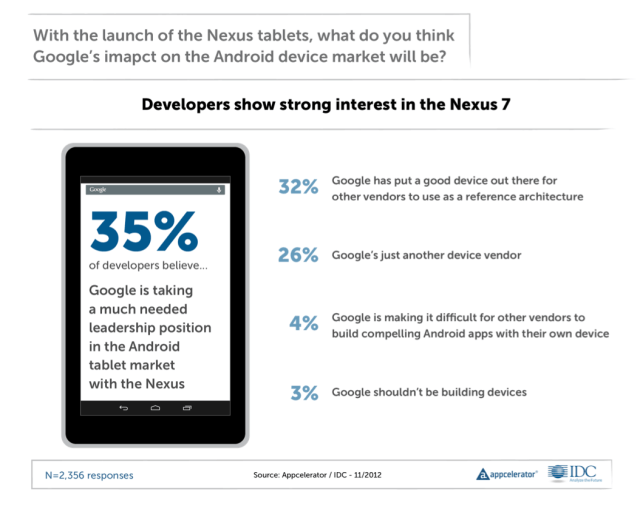 Other findings in the survey include a generally negative reaction by developers to Microsoft’s Surface tablet, with most expressing the belief that despite delivering nice hardware, the tablet and Windows 8 need a lot of work before they can become truly successful. Windows tablets experienced a modest rise in developer interest, but still trailed far behind Nexus, Android and iPad categories.

Developers also expressed concern about Apple’s recent hardware introductions, with only 19 percent agreeing that Apple has done enough to manage the fragmentation issues introduced by introducing new screen sizes as with the iPhone 5. And while the iPad mini retains the same resolution of the original iPad and iPad 2, developers still see reason to tailor designs to it, since the smaller physical screen means the relative size of touch targets shrink. 90 percent of developers also rated Apple as either equally or more difficult when it comes to the submission process, monetization and other issues, a sign Appcelerator and IDC interpret as an opening of the door for alternative platforms to gain more traction.

Finally, mobile developers saw it as likely that a mobile-first company could arise and disrupt big tech companies like Microsoft, Google and Facebook. Facebook especially looks vulnerable to a mobile-first social startup, according to survey respondents, with 62.4 percent of developers saying the network would lose its social dominance to a mobile-first competitor eventually. That’s pretty close to what developers believed in the previous quarter (66 percent), despite Facebook launching a completely overhauled mobile strategy between the two. But of course, this survey is targeting mobile devs, many of whom could actually be working on (or know someone who’s working on) what they believe will be a Facebook-killer, so it’s worth taking that stat with a big grain of salt.