Facebook’s HTML5 app nightmare is over. Later today it’s releasing Facebook for Android 2.0, which replaces the hybrid native/webview code with an all-native infrastructure to answer years of complaints by making the app much faster. The push follows August’s speed doubling iOS update that drastically improved user reviews. It’s a fitting end to the year when Facebook truly pivoted into a mobile-first company.

Here’s how the HTML5 horror story began. Facebook was looking for a way to reduce strain on its mobile teams. So it changed its native iOS and Android apps to partly become webviews wrapped around its HTML5 mobile site. This let it push code once to update m.facebook.com, and both apps simultaneously. It also let Facebook rapidly deploy small tests to segments of its mobile users without forcing them to download new versions.

That wasn’t a bad idea when the company was a bit smaller and mobile wasn’t as popular. But as smartphone penetration and Facebook’s user count increased, being nimble didn’t matter as much. It needed stability and a top-notch user experience. What it had was devastatingly slow apps with long load times between screens and unresponsive controls. CEO Mark Zuckerberg would later call relying on HTML5 was one of Facebook’s biggest mistakes to date. 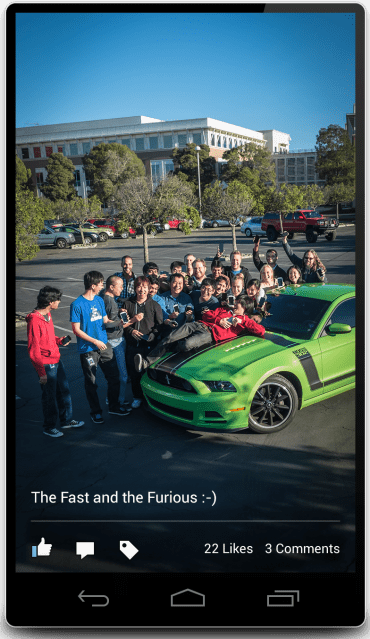 So nine months ago it made a tough decision. It would backtrack, rebuild its mobile apps natively and focus on speed. The launch of the iOS update in August was met with rave reviews…or at least not the rabid reviews it had been getting. Its App Store rating shot up from 1.5 stars to 4 stars in 3 weeks. Facebook promised it’d do the same for Android users.

That brings us to today. Facebook for Android 2.0 will be rolling out to the Google Play store over the next few hours. By retooling the app natively, the app launches more quickly; notifications and Timeline load faster; and news feed stories show up sooner and scroll smoother thanks to Facebook’s new custom ListView recycler. You’ll get alerted to newly published stories from friends thanks to a drop-down banner.  Photos now open almost instantly because they’re loaded into a device’s native memory rather than the Java heap.

Facebook explains that the update “creates a solid foundation for the Facebook for Android app moving forward. The infrastructure in place will continue to let us make the app even faster, smoother, and feature-rich.”

It isn’t abandoning HTML5 entirely. Facebook’s mobile site will still run on HTML5. It will also continue pushing for better HTML5 standards from mobile browser vendors in hopes it can one day do more with the protocol.

Today should feel like a holiday to Facebook’s Android users who’ve spent months suffering (as much as one can suffer from ten second delays to see what your friends around the world are doing). Faster speeds mean less user frustration, leading to longer session times. That equals more content shared and more ads viewed.

The improved quickness will also help Facebook box out lighter-weight apps like Twitter and mobile design masterpieces like Path. Most importantly, though, is that the update will make people happy. Brief free moments spent in line at the cafe or on the bus can now be filled with some Facebook browsing. Though subtle, just knowing you won’t spend those extra seconds staring at a loading screen will get you to open the app more often.

Facebook for Android 2.0 will be available in the Google Play store, either now or in the next few hours depending on how fast it rolls out to you.