This is the time of year when most consumer-facing companies put out their “Year In Review”, which reflect upon what happened on its service during that particular year. It’s pretty straight-forward stuff usually, but Twitter is a different type of company. By different, I mean that very rarely do you find a company that can follow its user’s pulse and passion as closely as only they can.

Today, Twitter released its 2012 Year In Review, and while there might not be any surprises for those of you who remember all of this year’s big events, for others, it’s a walk down memory lane on a year that seems like a blur at this point.

I have to say, this isn’t what I expected from the company. I’m used to long posts with links to information, leading to pages of more information, but this experience is visually appealing. The personal aspect of it makes it something that you can spend the next few weeks exploring and having fun with. You might unearth something that you or a friend said months and months ago that still brings a smile to your face today.

Catch the Cory Booker call out in the video? Yes, it was an amazing year in a lot of ways.

Here’s what the company had to say:

Every day, we’re amazed and humbled by the many ways in which people use Twitter, which range from simply retweeting to igniting conversations with hashtags (even around lesser-known topics) to sharing spectacular and far-flung views. In 2012, everyone on Twitter brought us closer to moments and places that used to be far away or inaccessible: A Tweet from the bottom of the ocean. Tweets from Mars. An extraordinary view from space of Superstorm Sandy. A quiet backstage moment with a presidential candidate. All of these and millions of other such moments were ours to experience directly wherever we were, in the midst of work or play or travel.

My favorite reflection on 2012 is the most retweeted tweet, of course. It was…. 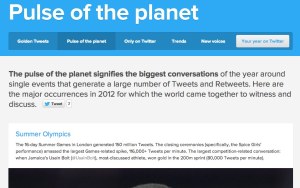 When it comes to discovering the most interesting trends and tweets in 2012, the immersive experience that Twitter has provided is split up into five categories for your browsing pleasure:

Yes, Twitter is an extremely personal service, and that’s why the company is not simply showing you what it found to be interesting or popular this year, it wants you to feel like you were a part of it, because you were.

To that end, Twitter has partnered with Vizify to bring you a unique and personal experience with a “personal infographic”, but let’s call it a snapshot, shall we? 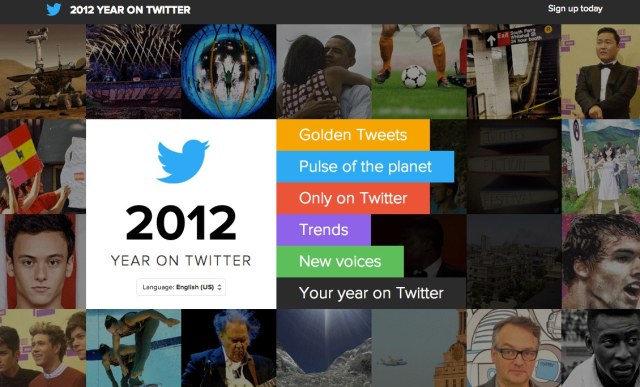 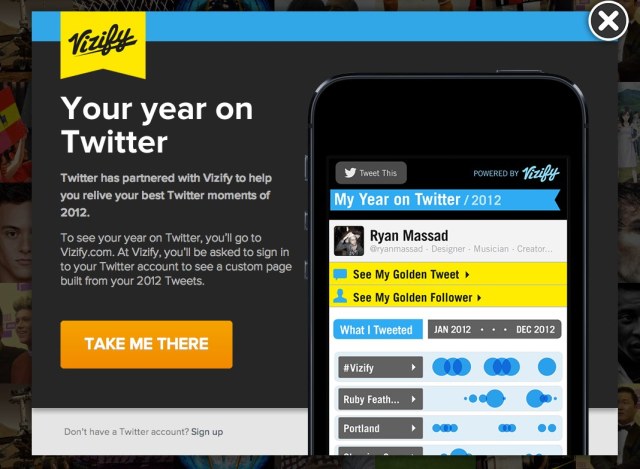 Sadly, since I apparently tweet too much, I can only see my tweets going back to the beginning of this month, but perhaps that’s a bug. Regardless, this is a pretty neat dashboard of all of your most interesting tweets: 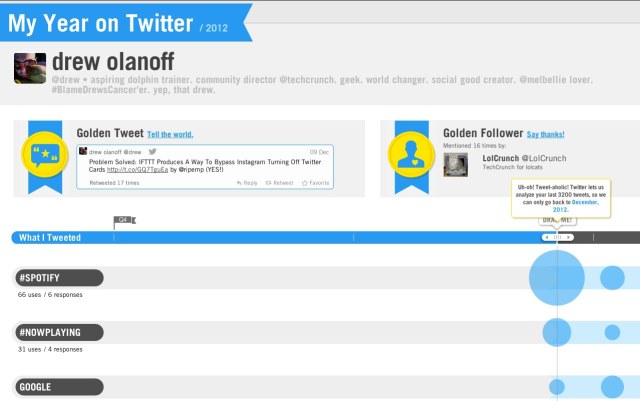 This is a pretty big week for Twitter, which just yesterday announced its latest update including photo filters, much to the non-surprise of the community, especially after the whole Instagram deal.

2012 was full of happiness, tragedy and everything in between. Twitter is a service that was there all along the way, as a place to share our thoughts, hopes, desires and pain. It didn’t judge. It just wanted to know what was happening.

I would like to humbly submit this for tweet of the year, which happened only last night: