You may have heard the disappointing news that Instagram (now a Facebook property) recently decided to tweak its support for Twitter cards such that users will no longer see their artistically-filtered iPhone photos in all their majestic glory.

Instagram’s stinginess means that Twitter cards will be cropped, stripping them of their visual appeal. CEO Kevin Systrom says it was a move made to drive traffic to Instagram.com, so adding some friction seemed a good way to do that. Or it could have been Facebook’s influence.

Regardless of the reason, what should aggrieved Twitter and Instagram users do? Go out and actually buy an old Polaroid camera or develop their own film?? HA! No no no, that’s a ridiculous idea that might have helped save two iconic American companies.

Luckily, IFTTT user djbentley came up with an awesome workaround to turn the tables on this Twitter card cropping fiasco. All you have to do is, well, sign up for IFTTT first, connect your Instagram and Twitter accounts, then create the recipe. It may sound complicated for first-timers, but it’s not.

When posting your Instagram photo, include a tag of your choice, and it will post to Twitter as a native image with a card. Bada bing, bada boom.

For those unfamiliar with IFTTT, beyond being the sound you’d make if someone were to punch you in the throat, it stands for “if this, then that” and allows you to connect your various accounts/channels, like Evernote, Facebook, Instagram, Dropbox, etc. and create recipes to make them work together.

Huh? Basically, IFTTT is a command interface that enables you to set triggers for specific actions like, “if I post a photo, automatically save it to Dropbox,” or in this case, “if I post a photo on Instagram tagged with “#twitterpic,” then post it to Twitter (with a card). This conditional statement/equation is called a recipe, and IFTTT has a ton of awesome ones for a whole mess of things. 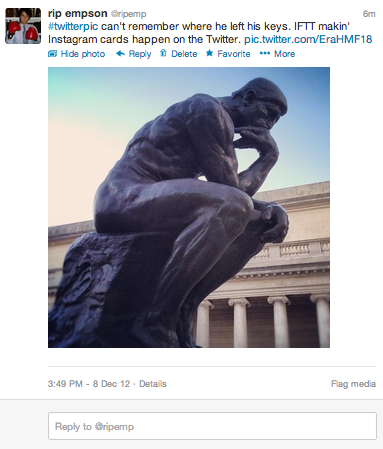 As you can see in the image to the right, I used djbentley’s IFTTT recipe to auto-post a ‘gram to Twitter, and the Twitter card showed up in full, without the crop.

I managed to mess up the tweet syntactically and spell “IFTTT” wrong, but, hey, it was a first effort. I’ll get there eventually, and so can you, reader. So can you.

It’s too bad that there has to be a workaround at all, but rather than wax on those implications, I’ll let Drew and Captain #Poohead explain what it all means and why it’s bad for We The User.

Luckily Twitter hasn’t yet turned off support for IFTTT. It allows inbound but not outbound. If inbound support goes out the window, we’ll know that Twitter-gram are really out to give users a thorough screwing.

Or, according to Mike Isaac, Twitter is just instead going to add its own photo filters. Who needs Instagram, says a sad, persecuted Twitter, as it scrambles to add what will probably be a crappy, cobbled-together offering. It’ll be like Apple Maps to Google Maps.