For Quantified Self devotees, data hounds and fitness enthusiasts, it’s a good time to be alive. Recent improvements in sensor technology, battery life and connectivity (and lower costs) have given rise to a slew of wearable gadgets and apps that make it easy to track and make sense of our health data. Yet, as the space heats up and gets noisier, some have begun to ask: Do we really need another fitness watch? Basis, the makers of a new wrist-based health tracker, think so.

The venture-backed startup first revealed its long-developing tracking band over a year ago and recently pulled back the curtain on its accompanying web service. Today, Basis is finally bringing the whole kit-and-kaboodle to market, not-so-coincidentally hot on the heels of the second coming of Jawbone’s UP.

Priced at $200, the Basis band and dashboard allow users to continuously measure their motion, skin temperature, heart rate, calories burned, sleep patterns, and other physiological indicators. The device itself, which will initially be available in white and black, offers an LCD display (and touch capacitive buttons) interface that shows the date and time just like your trusty old wristwatch, along with an estimated four-day battery life. The fitness watch also includes BlueTooth support, which the company will begin activating when it releases its mobile apps — expected sometime in the near future.

For starters, what makes the device stand out (and why Basis thinks there’s room for another player in this space) is that it comes loaded with sensors. Beyond pulling data from its 3-axis, built-in accelerometer (that measures sleep patterns), the band comes with an optical scanner to track blood flow (and heart rate), along with perspiration, skin and ambient temperature monitors that aim to characterize workout intensity and heat dissipation among other things. 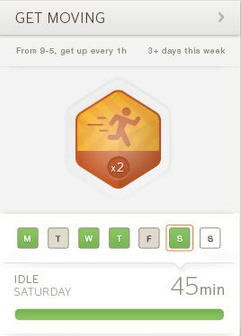 While the four input channels seem like they come with the potential for information overload, the company is assuaging those fears with a web interface that works to streamline your multivariate health data into an easy-to-consume (and understand) interface, including the familiar metrics like calories burned and hours slept.

Basis CEO Jef Holove says that the problem with most current offerings is that they rely too heavily on the accelerometer and require too much manual data entry. As a result, many users who take to these devices start out excited but quickly give up, relying on memory or wishful thinking to stay at it. This poor retention emanates from a weak foundation, he says, as apps need not just to be focused on data collection but what to do with it.

The great “so what?” question when it comes to health tracking. People need a way to maintain their motivation and that comes from seeing progress and real gains in whatever it may be — the amount of sleep they get each night, the number of push-ups they can manage without having a hernia or simply the amount of steps they take each day.

Holove says that the team has designed Basis to reduce friction via automatic tracking, classification and uploading, by offering relevant insight and feedback loops so users can see how they progress over time (both short and long term) and finally the ability to make small, concrete actions that (when added up over time) result in positive health outcomes. Not only that, but really the biggest point of friction is that health tracking systems require users to go too far out of their way to change their habits. Systems, then, have to adjust to the ups and downs of real life. 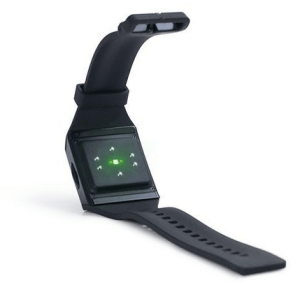 If drastic behavioral change and lack of time cause a 50 percent drop-out rate for new exercise regimens, then new incentivization and motivational structures are needed. Rather than relying on peer pressure or financial rewards to be the catalyst for change, the key for health trackers is to adapt to the data (and activity) of each individual user. Using a little behavioral economics, a little habit design and a large dose of Quantified Self’s data obsession, Basis wants to help users move toward their goals incrementally, breaking those down into flexible micro-benchmarks that make it easier to build momentum.

To accomplish that, Basis focuses on choice. In other words, the startup’s web service allows people to choose the healthy habits that work best with their lifestyle. At launch, the service offers 10 different habits that aim to gradually increase user activity (or more sleep), like “Get Moving,” “Consistent Bedtime” and “Activity Addiction,” for example. Pick the three or four that work for you. Basis then automatically adjusts the frequency or target of a user’s chosen habit at the end of each week, basing that calibration on their performance from the week before.

Taking data from its 4-input points, Basis uploads your health information to its secure, cloud-based service and applies some algorithmic voodoo, before serving your key activity and sleep metrics, like caloric burn, sleep quality, resting heart rate, etc. One of the coolest features of the device’s sensors is that it auto-recognizes the difference between activity and sleep, removing the need to manually switch modes and allowing it to intuit at what time of day habits are achieved. 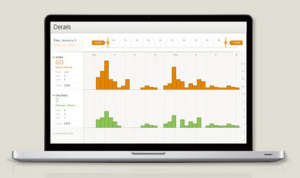 Basis allows users to view that data on its “Patterns” page, where they can view heat maps broken down into every hour of the day across two weeks — which applies to each of its metrics. As users progress, they’re awarded points based on how active they are and whether or not they meet their targets.

If the targets are met, badges within the Habits page are unlocked — both of which serve to add a bit of gamification to the Basis experience. However, the point system in particular is not designed as an entry point for eventual leaderboards or prizes, the CEO tells us, but instead as a quick way for the system to see what activities are most worth repeating (and focusing on) given your lifestyle.

Underneath all of these moving parts, Basis wants to build a platform that will eventually include public APIs as well as complementary data sets from other apps and devices. In other words, Basis (like, say, RunKeeper) is in pursuit of the health graph.

The other aspect worth noting is that, while Basis does offer some basic notifications and alerts (which will naturally become more useful once its mobile apps arrive), it has to be careful here. Some might suggest that it would be ideal for a monitoring system like this to automatically send alerts or messages to family members, doctors or a hospital if, say, someone’s heart rate dropped significantly. While Basis offers some basic, high-level info (i.e. conventional wisdom) on particular habits and how they affect health, but if it moves too far into the advice column or prognosis, it subjects itself to being defined as a medical app. And that means regulations. For now, that’s not a road the startup wants to go down. 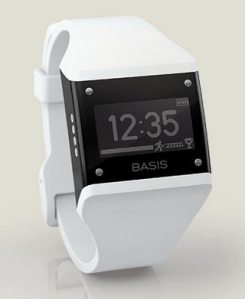 The company has plenty of competition to contend with, from sleep monitors to activity monitors to fitness-tracking apps, like Fitbit, Nike’s FuelBand, Lark, WakeMate, Zeo, Jawbone’s Up, RunKeeper, Runtastic and MapMyFitness — to name a few. At $200, Basis is definitely pricier than its average competitor, but it also seems reasonable given that it’s chock-full of sensors and comes with a dashboard, some good-looking visualizations, automatic tracking and feedback loops that actually record our real (busy) lives — not our ideal ones.

Once it adds mobile apps to the picture, Basis may just become the one to beat. That is, of course, if you’re into that whole quantified, self-monitoring thing.