A jury might not have acquitted Casey Anthony of the ‘drowning’ death of her daughter if they knew she Googled “foolproof suffocation” on the last day little Caylee was seen alive. It’s the latest example of Google search history becoming evidence in murder case. But this time the digital footprints were found too late and the suspect has already been set free. Are police paying enough attention to browser breadcrumbs?

The death of Caylee Anthony became a media spectacle in 2011 as the nation watched her mother mislead law enforcement, yet still be found ‘not guilty’. Caylee went missing on June 16th 2008, and her body wasn’t found until December 11th in Orlando, Fla., Casey’s defense claimed Caylee had drowned, and despite being found guilty of four accounts of providing false information to police, the mother was acquitted of the first degree murder of her daughter. 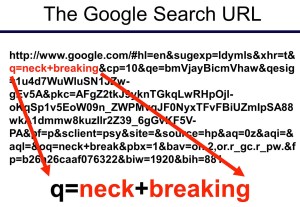 During the trial, the prosecution’s experts also testified that the Anthony family computer had been used to Google words and phrases including:

But this last week Orlando’s WKMG TV station reported that police had overlooked a key piece of evidence. Someone had Google searched “foolproof suffocation” from the Anthony family computer on June 16th, the day Caylee disappeared. A book about the case by Anthony’s defense lawyer Jose Baez had previously reported that someone made the search, but had the timing off. The book suggested Caylee’s father had Googled the murder method.

Now WKMG reports that search happened an hour later, after George Anthony may have already been at work, and that Casey is likely to have typed it in. If the mother had Googled a way to suffocate someone on the last day anyone saw her daughter alive, the jury might have concluded differently.

Google searches have already been used in several murder convictions. In 2005 Mac specialist Robert Petrick was convicted of murdering his wife after evidence surfaced that he had Googled “neck snap break,” downloaded a document named “22 ways to kill a man with your bare hands” and researched how deep the lake was where his wife’s body was later found.

In 2006, Justin Barber was sentenced to life in prison for murdering his wife on a beach. He had previously searched for “Florida & divorce,” as well as the words trauma, gunshot, right chest, and cases. He’d also downloaded and then deleted the Guns N’Roses song “Used To Love Her” that details murdering one’s significant other. Search Engine Land has an old list of several more convictions where Google played a roll.

Yet still, the Google search history of the Anthony family computer wasn’t examined closely enough. It seems that detectives and police may benefit from greater training in digging for digital evidence. I doubt it will be long before mobile search history and other smartphone evidence starts popping up in trials. However, law enforcement will need to be careful not to violate the Fourth Amendment, which protects against unreasonable search and seizure. A murder case was overturned in September after police read a suspect’s text messages without a warrant.

Dusting for fingerprints and DNA evidence may always be critical parts of detective work. But as the ways we learn and communicate increasingly move online, forensics must evolve as well.