Editor’s note: Chloë Bregman is a product designer working on a new communications startup. Most recently, Chloë designed DrawChat, a drawing based messaging iphone app which is currently being auctioned off, and helped ignite Changemakrs, an inspirational quote site meant to help people inspire and be inspired to change themselves and the world. Follow her on Twitter.

Startup founders often ask me to take their app ideas and make them pretty. They feel that they need a beautiful product in order to get funding. I call this “pretty first,” and it’s when a startup focuses on creating a visually beautiful design for an app before determining whether the product has purpose and is useful.

This newfound emphasis on pretty first is, in part, a response to the increased importance being placed on visual design within tech products. It has provided great recognition for the design community. But “pretty first” is the wrong approach. If your product is not useful and engaging, it doesn’t matter how pretty it is.

First, let’s look at products that have been successful:

Not all startups, however, are realizing this kind of success. Many today are chasing a visually beautiful style without necessarily hammering out the problem that their product solves. The attention they pay to design has led to a newfound enthusiasm for white space, grid patterns, and typographically led designs. This design-heavy influence is translating into a lot of minimalist sites. The look of Web 2.0 is dead. It’s quickly being replaced by “clean design,” which is reminiscent of the Swiss style of graphic designs from the 1950s, embodies many of the principles of the Bauhaus movement, and has almost no drop shadows or gradients.

Some people think this design style, popular in apps such as Flipboard and Letterpress, started in mobile and is moving to the web. But really it is happening everywhere at once. Great examples of this phenomenon online are Svbtle and Qz.com. And Pinterest looks like it was designed with Wim Crouwel’s modernist grid designs from the 1950s.

With all this attention on the visual aspects of products, are we ending up with products that function better? In the chase for perfect pixels, white space and copycat Pinterest interfaces, we are seeing long-standing products undergo redesigns that don’t make them function better and, at times, even makes them less functional. The great Gmail redesign of 2012 has led to user outrage and confusion, partly because it more strongly focuses on “clean design” principles over user benefit and behavior.

How To Design A Product

Steve Jobs put it best: “Some people think design means how it looks. But of course, if you dig deeper, it’s really how it works.”

Focus on the benefit to the user. What’s the user problem and how do you solve it? In the beginning, use off-the-shelf icons. Use Balsamiq. Come up with a basic design, build a basic app, and hand it off to users. Spend minimal time on what it looks like.

Before you’ve resolved the core issues in your app, don’t waste cycles on visual design. If you need help from a designer, reach out to an interaction designer or a product designer. You don’t need a visual designer pumping out pretty pixels. You may need someone to help you clarify how to make your product work and accomplish it in a simple and engaging way. 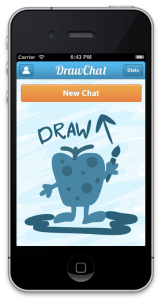 On iOS, you have to deviate pretty far from what comes in the box in order to mess things up. With Twitter Bootstrap, even the most design-averse engineers can create a basic, beautiful website. It has become drastically harder to make a completely ugly product.

Test with real people as soon as possible. We made a mistake on a previous project I was involved with when we spent six months building a newsreader app without extensive user testing. We had amazing interest graph algorithms, but when we launched the app, we found out that no one was interested, no matter how pretty it looked. Everyone thought the app was gorgeous, but no one used it.

When we built DrawChat initially in five weeks, we iterated on the product quickly based on user feedback. Instead of wasting early cycles to beautify features that we later cut, we focused on getting a plain-looking version of a feature into the app, found out if anyone used it or cared about it, and then prettified it later.

One thing we got right with DrawChat is that we made the app friendly and playful to use. Instead of an empty conversation list with a prompt to start chats, we added a draw monster pointing to the “New Chat” button. This type of playful detail will stick in the minds of users far more than the most perfectly fine-tuned gradient pattern.

Another example of playful design is the “Kudos” button on Svbtle, which lights up and pops out. The animation is designed to delight and reward users for giving positive feedback.

Focus on creating a useful product first. When you have a useful product, don’t fine-tune each pixel. Create moments of delight that are always playful and sometimes unexpected.

Investors aren’t stupid. If your value proposition is solid, you don’t need the most beautiful app screens. Their job is to separate the wheat from the chaff. If your product idea is great, they will be able to judge if you’ll be able to build it and make it pretty, too.