There are bugs, and there are pretty embarrassing and ridiculous mess-ups. This one was is a screwup straight from Mountain View, and it’s a very real problem. If you’re trying to add your friend’s birthday with a new event to their contact entry under “People,” and you use an Android device with Jelly Bean 4.2, and they’re born in December…you’re crap out of luck, because Google decided to leave December out completely. For all the years.

Oops. The issue was apparently reported two days ago and we might be getting Android Jelly Bean 4.2.1 before we know it. Because, well, December is indeed coming, whether Google wants it to or not. 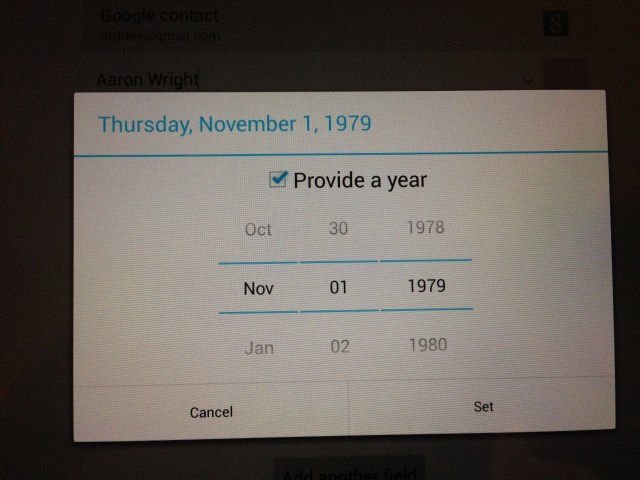 Don’t worry, Google Calendar is fine, and you won’t be able to skip appointments and blame it on your phone.

How does something like this make its way into a production environment? I mean, Google is a huge company, and I’m sure that the Android team alone has a massive fleet of QA testers. Are they simply grinches? The latest version of Android, 4.2, has only been in the wild for four days now, so it’s not surprising that not many people have noticed it yet.

On a very real note, this, in essence, could affect any and all apps that rely on the Android date picker, but that’s not yet confirmed. The reported issue itself has been “reviewed” by someone at Google, but there is no timing yet on when a fix will be shipped. The good thing about Android is that the update process is fairly seamless. I’ve talked to teams at companies in the past on oopsies that slipped out into the wild, but never something like this on an operating system.

That’s right, there will be no claiming of “that’s a feature, not a bug” on this one, folks.

Still though, would Apple ship something like that? Apparently they did, according to our commenters. Best comment on Facebook so far was from Dillon Brice with: “It’s their way of avoiding the Mayan Apocalypse. Well played Google.”

We’ve reached out to Google for comment, and will let you know when we hear something on when this might be fixed.