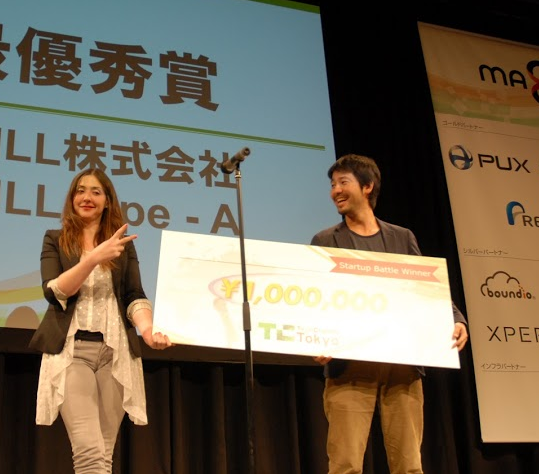 Whill, an electric add-on that wheelchair users can use to go longer distances, picked up the grand prize of 1 million yen (or about $12,500). It turns a regular wheelchair into an electric vehicle or something like a Segway that goes about 12 miles per hour. The company is one of a handful of promising hardware startups that are emerging in the country while venerated hardware giants of the past like Sony and Panasonic face waves of layoffs amid competition from Korea, China and the U.S.

Founded about two years ago with help from a rehabilitation center in Kanagawa, the company is made of designers that have worked at Nissan and Sony. They have two products. One is the original electric wheelchair add-on they showed off at the Tokyo Motor Show last year and then they also have a newer version of the idea that they’ll start retailing for about 500,000 Japanese yen (or about $6,100) this winter.

The runner-up was Sparta, which makes 3D animation software. Animators can easily edit 3D models through a technology that turns them into clouds of points. Using a pen tool, graphic artists can delete or add bits of points to a 3D model. The video of the wine glass below demonstrates the technology better than I can explain it in words. There’s also an asset store where users can store and share data.

The company’s part of Open Network Lab’s seed accelerator and raised about 1 million Japanese yen (or $12,500) from them. They also took in about 590,000 Japanese yen from crowdfunding site Campfire, which is like Japan’s Kickstarter.

Shading Enhancement from sparta on Vimeo.

Meetrip is like a local version of Vayable, where users can sign up to find tour guides wherever they travel. The idea is to give people a more authentic travel experience with people who are actually from or know the place you’re going. The company has added 10 new cities in recent weeks and has about 1,000 local guides on the platform. For now, it’s mostly focused on Asia with availability in places like Jakarta, Taipei, Bangkok, Bali and Ho Chi Minh City. Tour guides usually cost around $10 to 20. Like Airbnb, Meetrip uses Facebook Connect to authenticate identities and build trust.

With Japan’s labor market becoming slightly less inflexible (after having a long cultural legacy where workers get lifetime employment), it’s inevitable that more services for job seekers are going to show up. Gunosy Career connects to Facebook and uses data mining to understand which openings might match a job seeker’s interests and experience. Instead of having to re-write your resume over and over again, users can just re-use their online profile like in LinkedIn. But LinkedIn doesn’t actually have a strong presence here locally, so that has left an opening for a more focused domestic competitor .

With as much as 50 percent of all searches coming from smartphones, local businesses are increasingly missing out on prospective customers if they don’t have mobile-friendly websites. With Smakul, small enterprises like restaurants and hair salons can enter their phone numbers to automatically generate a smartphone-friendly site that scrapes information from their desktop-friendly webpages. The company has a freemium model with three tiers of service from free to 2,000 yen (or $25) a month to a fancier site that has an initial cost of 50,000 yen (or $625) and then monthly servicing costs.

C-FO’s freee product is like Mint.com for small to medium businesses. It connects with the banking accounts to show inflows and outflows of cash, which helps cut down on paperwork. The product has yet to launch and the company is run by a former Google marketing manager named Sasaki Daisuke.

Videogram finds the most interesting snapshots from any given video to create a mosaic of stills. The idea is that Videogram will increase clickthrough rates and get users to watch more content. Right now, YouTube and other sites automatically suggest a still, but the company argues that it’s often not the best or more representative part of the video. Videogram analyzes brightness and other aspects in a given clip to find the very best ones.

Language Cloud is a platform for language learning. It helps teachers manage assignments and tests. It also records audio of students practicing speaking and compiles all of the clips so that a teacher can quickly go through dozens of sound files to correct errors.

The company says it’s already in 54 schools with about 7,000 students and teachers. The company is working with language professors at Tokyo University to deploy it more widely. The company is backed by 500 Startups and Japan’s Digital Garage. It recently closed a seed round. They plan to monetize the platform by offering premium apps in a store.