Talk to 500 Startups’ Dave McClure about what’s important for his seed fund and accelerator going forward and it’s not just about finding and supporting whiz-bang entrepreneurs. It’s supporting entrepreneurial and ecosystem growth outside of the U.S. And of late, that’s translated to many of the top accelerators in the U.S. working to expand their programs networks both at home and abroad, especially before this newfangled accelerator bubble bursts.

Adeo Ressi and Founder Institute are of the same mindset and, in many ways, seem to have a head start on the international front. In December of last year, for example, Founder Institute already claimed to be the largest accelerator (in terms of graduates), with over 20 percent (100+) hailing from overseas.

Since then, FI has been continuing its expansion march, doubling its presence in Europe during the month of October, for example, by launching chapters in Croatia, Finland, Rome, Ukraine — on top of those already existing in Germany, France, Belgium and The Netherlands. This puts the early-stage startup accelerator on pace to launch over 250 European companies in 2013, which it hopes will begin generating 1K new jobs/year. Today, it has over 660 alumni worldwide.

However, many Western minds (and media outlets) tend to overlook innovation happening outside of Europe, specifically in the Middle East. And to be fair, there’s good reason. The Middle East, at least traditionally, hasn’t exactly been a hotbed for startups or technological boundary-pushing. In fact, as Mehrunisa Qayyum recently pointed out, the Middle East is now wrestling with its reputation as being, instead, a hotbed for clones.

However, this isn’t necessarily a bad thing, Qayyum continues. And she’s right. As I’ve written about the fast-growing Peak Games (a Turkish social gaming startup), there’s big opportunity for startups, mobile developers and entrepreneurs in localizing everything from games to Groupons for the Arab World — and beyond. Look at how Peak Games is doing it.

Just because one is taking a successful format and applying it amidst a different cultural backdrop doesn’t mean it has to be blatant copy-and-paste porting, or be seen as nefarious. Sure, for purists, it’s not “true” innovation, but Peak Games has been gobbling up local engineering talent and game development houses to help it build original titles for an Arab market that put a local spin on formulas that have worked well for Western gamers. Either way, this localization is a good place to start, even if originality is the end-game for Middle Eastern and MENA-based innovation. 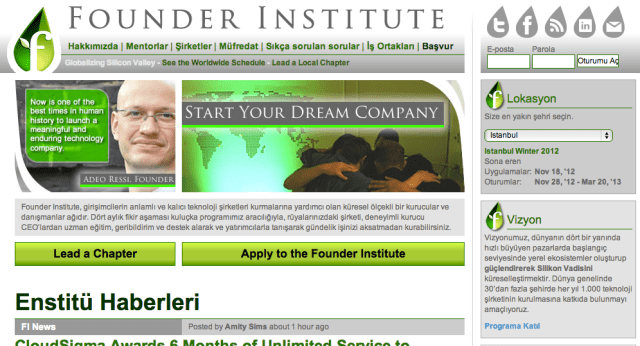 These is the type of discussion (and the types of lessons) Founder Institute is attempting to produce as it quietly rolls out across the Middle East. FI Founder Adeo Ressi himself just returned from a whistle-stop tour across Europe and the Middle East, where the startup accelerator is already operating a chapter in Tel Aviv Israel and has recently launched new chapters in Istanbul, Turkey, Riyadh, Saudi Arabia, and Alexandria, Egypt. It is also currently developing chapters in the United Arab Emirates (UAE) and Oman.

“The Middle East is particular interesting to us,” Ressi says, “both because it collectively has a young population that’s growing fast and is increasingly literate in web and mobile tech as well as the fact that young, entrepreneurially-minded people in these countries have traditionally been underserved and overlooked by incubation and accelerator programs.”

What’s more, historically, parts of the Middle East have had embattled relationships with supporting female entrepreneurship — not to mention women’s rights. While the landscape is still far from ideal, things are beginning to change and Ressi says that Founder Institute sees huge potential in these countries for female founders. 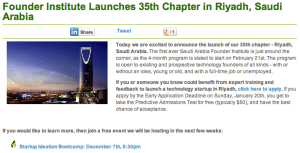 While its Middle Eastern initiative is still incipient, the founder is optimistic because in the case of its chapters in Egypt, Oman, Turkey and Saudi Arabia, Founder Institute has been invited into each country by the state as a way to promote the growth and stability of tech innovation. Again, the founder sees this as an opportunity to encourage women to put on entrepreneurial hats and to help accelerate those already-existing female-led enterprises in the region.

“Our goal is to get to a place where 50 percent of our graduates are female,” Adeo says — a goal they’re already nearing in Israel. It’s not going to be easy, as women often face a greater number of obstacles in starting a business everywhere, especially in the Middle East, he says, but you can argue that the extra effort will lead those who are willing to try to even greater success.

And while challenges lie ahead, change is coming. “If there wasn’t an opportunity for women in the Middle East,” Ressi tells us, “we wouldn’t be there.”

500 Startups recently funded its first Middle Eastern startup called Jeeran — a Yelp for the Arab world — and for more info on startup initiative and support in the Middle East, check out these two posts.