Everyone hates the annual employee or management review process: Most employee reviews are done annually, and so it’s difficult to figure out what’s going on in an organization and any given point. Not to mention, annual performance reviews are a huge, time-consuming pain in the ass. Enter TinyHR’s TinyPulse, which turns the review process on its head. Rather than doing a big review once a year, employees are pinged with short questions weekly.

TinyHR was founded by serial entrepreneur David Niu, after spending years struggling with the problem of how to keep his finger on the pulse of employee sentiment at the companies he founded. TinyPulse tries to solve the review problem by providing an ultra-simple way for managers to find out how their employees are doing. It works like this: Once a week, TinyHR takes a survey of all employees signed up through its system, and then compares results not just within the organization, but across its whole range of clients. Questions change week after week, but once a month, employees are asked a baseline question that can be tracked over time.

All responses are anonymous, so employees can not only answer the question given to them, but can provide their own feedback. That acts as a suggestion box for managers and how they can improve the way they do business. They can also send kudos to other employees based on their performance over the course of the week, anonymously or otherwise. 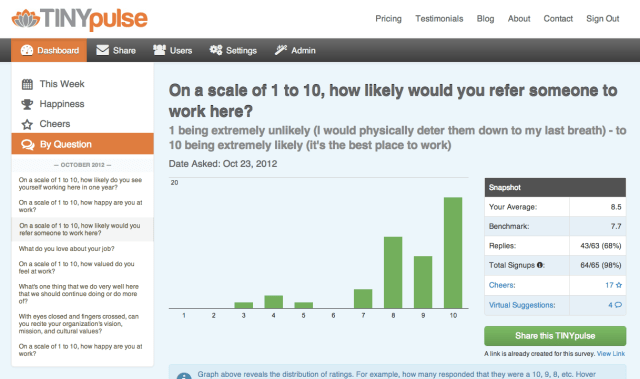 Since employees need only answer one question per email, it’s easy enough to get them to participate. But the data that comes out of that one survey email can be valuable, particularly as its compared across multiple organizations and compared over time. It gives a better view of employee happiness, engagement, and retention, through a dashboard of responses.

Matt Hulett, SVP and President of RealNetworks’ GameHouse, has been using TinyPulse with his team over the last several months. He deployed the service with one of his teams while Gamehouse was going through some organizational changes, and it helped him to get feedback on ways to change the work environment, while also being able to gauge the team’s performance year-round. “We don’t want to be surprised with the team not doing well,” he said.

TinyPulse operates on a SaaS-based model, where organizations pay based on the number of users they have. For the first 15 employees, TinyHR charges $29 a month. For up to 50, it charges $79 a month. And for up to 100 users, it charges $149 a month. TinyPulse had about 20 clients in private beta, but is now open to the public.