When Foursquare introduced the new web version of its “Explore” functionality for those who visit its homepage, we knew that something was up. This was absolutely the “new” Foursquare built on top of all the data that we’ve provided the service for years and years. You see, check-ins, tips and social connections tell many stories.

Today, the Foursquare iOS app got an update to tell you a new story — a list of places to go based on where you and your friends actually like to go. Until now, the Explore tab in the app sent you to a mix of places suggested by friends and their actions, along with what was close by. Now, there is a heavy focus on the places you’ve been to, but haven’t been back to in a while. It also adds a rating system between 1-10 based on interesting information everyone has pumped into the system.

Not only is this a new approach for Foursquare, but it’s also a direct shot at location-aware review services like Yelp. In its blog post announcing the app update today, it mentions “star ratings” in a way that suggests they’re simply no longer enough for users to make a decision about where to go. Google agrees, which is why it recently changed its Google+ Local rating system. Where does this leave Yelp? We’ll soon find out, but don’t mistake this move as “competitive.” This is something completely fresh that puts Foursquare’s offering in another league.

Here’s what Foursquare had to say about the new approach:

Now when you search for somewhere to go in Explore, you’ll see a score from 1 to 10 next to the name of a place. It’s our way to give you a quick sense of how much people love it, and it’s a lot different from the other types of ratings you see today.

Instead of other sites where every place gets 3.5 stars, we come up with our scores using the same Foursquare magic that powers Explore. We look at signals like tips, likes, dislikes, popularity, loyalty, local expertise, and nearly 3 billion check-ins from over 25 million people worldwide. And, with every check-in and Explore search, our scores will get smarter and better.

Here’s a look at what you can expect when you fire up Foursquare and tap Explore: 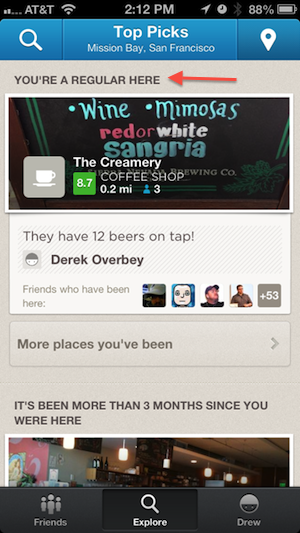 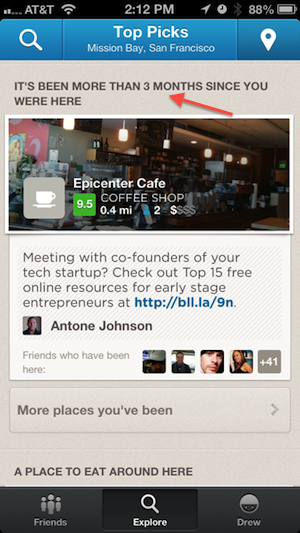 What you see above are the “reasons” why Foursquare decided to surface these two places, and it had to do with the fact that I frequent them or haven’t been there in quite a while. Couple that with the new rating system and how much my friends go, and we have a pretty awesome recommendation.

Below, you’ll see the actual numbers system, and all of these elements — been there a lot, friends there a lot, positive tips — means that these particular venues have been given a high rating. Close to a 10, actually: 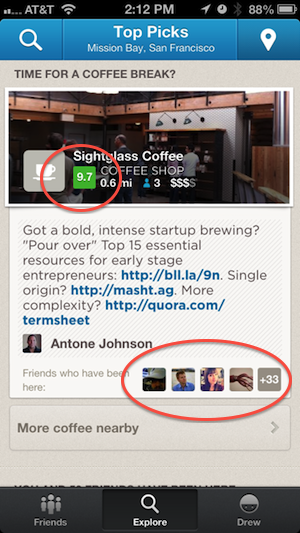 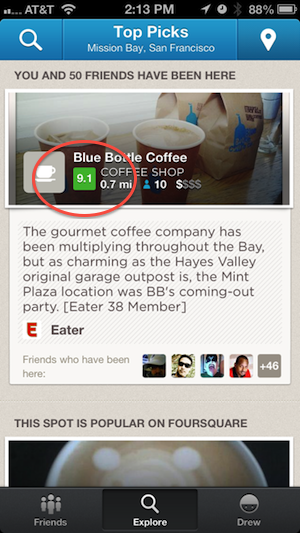 These fresh ratings, which aren’t super secret nor super general, really help you dig into finding a spot to head to when you’re on the go. When I want coffee, I want good coffee. By knowing where I am at the moment, where I’ve been and where my friends have been, Foursquare is now the go-to app to get there quickly.

Investors might be skeptical about Foursquare, but as a user, I’m not. I get so much value from the service that I can’t even nail down how much time or money it has saved me over the years.

I don’t want to read through 500 reviews that are mis-spelled or submitted by overly-angry people like I find on other services. I want to trust the people I’ve chosen to be connected to, and I trust my patterns in the past. All of this historical data that we’ve given Foursquare is finally paying off. For us. The way it should be.