Almost every day I think to myself, “Gee, I wish there were a mobile app with which I could capture intimate moments of my life through video and share them with my friends through the magic of social networking.” Actually, that’s a lie. I rarely ever think that. And yet, nearly every day — or at least once a week — I’m told about a new mobile app with which I can do just that.

The latest is Threadlife, a new app from Zappos co-founder Nick Swinmurn and BLITZ agency co-founder Ken Martin. Threadlife works like pretty much any other social mobile video app, except for a few things: For one, users are limited to capturing three-second clips — which it calls “stitches” — which are “threaded” together based on topics.

Because the clips are so short, there’s no editing involved. But, since users are choosing to contribute to these “threads,” they are able to put together some long, semi-compelling video narratives. That’s the idea, at least. 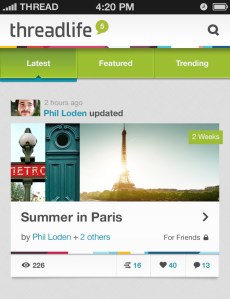 The whole thing is built around the idea of social sharing, so there’s the ability to add friends and family, and let them see the short videos you’ve shot. Also, to include them in threads that you’ve started or add videos to those that they’ve created. In that way, there’s kind of a collaborative video thing going on. You can also comment on or “like” threads, and share them through email, Facebook and Twitter.

The way it stitches together short life segments is similar to Lightt, another social mobile video startup that recently launched, the idea in both cases being that you can’t really get bored by or screw up three seconds of video. But in its current implementation, I wonder how many people will actually want to add to video threads and stitch up their lives together.

But then, mobile video is a hard nut to crack, and no one has really figured out the best way to get users to share with each other, or get them to watch whatever shared videos they’ve posted. Is breaking video down into three-second segments really more painless than 10 or 15 seconds? What happens when we take this to its inevitable conclusion and we’re sharing one-frame segments of our lives?