After having seen its mug plastered all over the internet in the days leading up to its release, actually playing with LG and Google’s new Nexus 4 seemed a bit anti-climactic. I mean, when you’ve seen a device like that cracked open and posed for your pleasure, it felt like there wasn’t much I didn’t already know about the thing.

Oh how wrong I was.

The first thing I noticed when I picked up the Nexus 4 is how remarkably sturdy it feels. Despite being an LG device, the Nexus 4 doesn’t really feel like one — it’s far more solid and slab-like than the plasticky handsets that the company has churned out in the past. This may sound weird, but I once I picked it up and got a feeling for its heft, I couldn’t resist the urge to tap the thing on the table a few times just to see how it held up (the answer: quite nicely).

Turning the thing over reveals the funky patterned finish that we’ve seen before, and it catches and reflects light in some interesting ways. To be honest, it seems a bit too flashy for a Nexus device (previous Nexus phones were largely free of visual flair), but that’s just me picking nits. I get the feeling that Nexus aficionados will either love or hate the way the Nexus 4 looks, and for now I’m caught right in the middle.

Speaking of looks, the Nexus 4 (as you’ve probably already heard) runs Android 4.2, which doesn’t stray too far from the aesthetic seen in Ice Cream Sandwich and Jelly Bean. You can check out a more detailed list of tweaks and additions here, but one change in particular threw me for a bit of a loop — the app launcher now sports five columns of apps instead of the customary four. 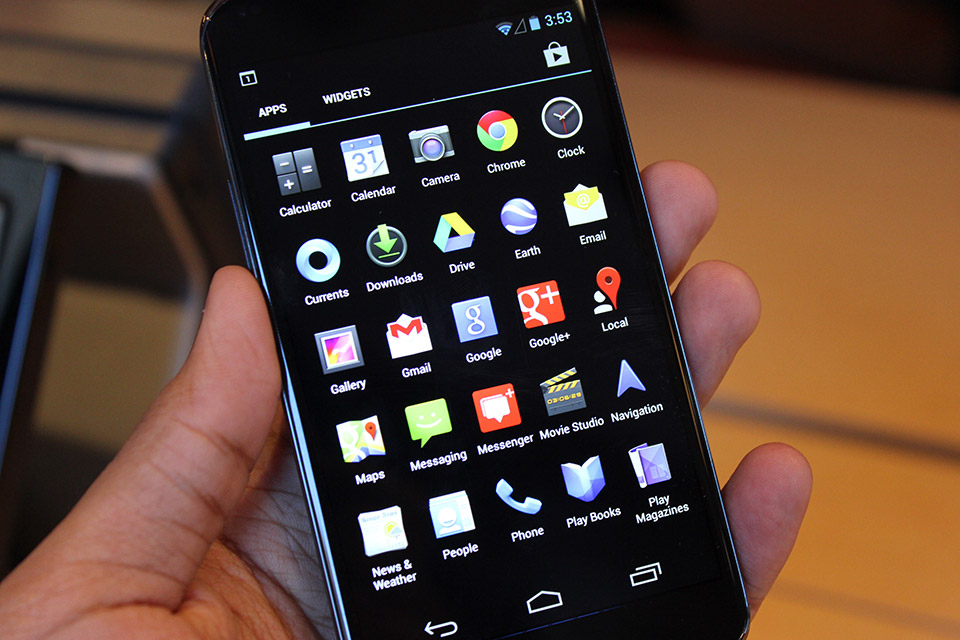 Meanwhile, the Nexus 4’s display represents a big step forward from the one seen in its predecessor. Don’t get me wrong, I love my Galaxy Nexus to bits, but the Pentile sub-pixel configuration meant icons and text didn’t appear as smooth as I would’ve liked. Thankfully, the Nexus 4’s 4.7-inch 720p IPS panel rendered colors brightly and accurately, but I think my eyes have grown accustomed to the way colors pop on AMOLED panels.

That’s all well and good, but how does the thing run? Well, it’s always tough to judge a phone’s performance after only playing with it for a few moments, but the whole thing — from swiping through pages of widgets and apps to scrolling through long lists of emails — was as snappy as you would expect from a top-tier Nexus handset. Of course, we’ve got LG’s Optimus G to thank for that since both devices share the same 1.5GHz Qualcomm Snapdragon S4 Pro processor and 2GB of RAM. To trot out a well-worn Android cliche, the experience was downright buttery, and I’m looking forward to really putting this thing through its paces.

I’ll refrain from making sweeping judgments for now, but the Nexus 4 managed to make a strong impression during the few brief moments we shared together. Expect a deeper dive into Google’s newest Nexus phone later this week after I’ve had some serious playtime, but in the meantime enjoy the rest of these photos.