A new study today from NPD DisplaySearch shows the progress of smart and connected TVs in recent years and during the second quarter of 2012. Connected TVs did well are doing well around the world, with shares in China and Western Europe growing from 26 percent and 34 percent respectively in 2011, to over 40 percent in both regions in 2012. Japan has a majority of viewers plugged in to smart content via their TVs, with over 55 percent penetration. But  North America has remained relatively flat at around 20 percent overall reach, the lowest of any region, despite having the highest levels of monthly internet video consumption. 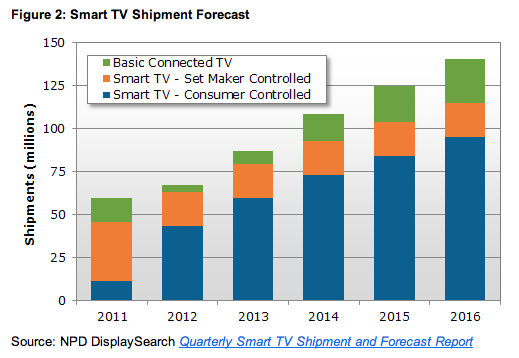 What’s going on here? According to NPD analyst Paul Gray, the issue is one of content, and free content in particular. In areas like China where lots of free content is available over the web through open sources, consumers adopt TVs with user-controlled access to the open internet in droves. In areas like Western Europe, free content is available through open standards but made available to users through apps and other dedicated services, meaning that users are flocking to smart TVs with those services built-in.

In the U.S. and Canadian markets, the issue is that most content is provided on a paid, on-demand basis, and tends to live on set-top boxes issued by cable companies, or by third-party hardware makers like Apple, TiVo and Roku. As a result, consumers are less eager to move to smart TVs, since they’ve got the services they need by other means, and the amount of content they can get via the open web easily and without hassle is limited compared to in other regions.

Still, the TV manufacturers seeing the most success overall are those who are introducing browsers to their products, according to the report, thanks to high adoption among users in emerging markets. Continued adoption of HTML5 should help that trend continue, despite the fact that a browser appears to have relatively little impact on buyer choice in the lucrative North American market.