Signs that Particle has indeed become part of Apple are evident on the LinkedIn profiles of several Particle staff members. A tweet sent by Particle front end developer Lynn Collette today, appears to confirm the news — while her public LinkedIn profile directly lists her as a “UI engineer at Apple”. 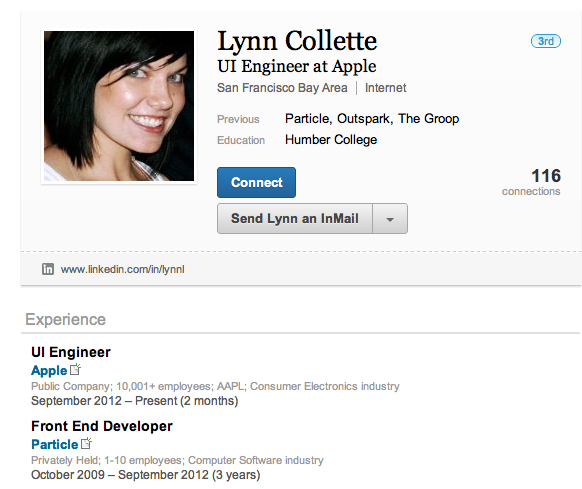 All these job changes are listed as taking place in September.

We’ve reached out to Apple but the company rarely confirms acquisitions so we’re not expecting a response.

Particle is a growing professional services business in creative concept work, visual and user experience design, and technical implementation. Its founders have a significant history with digital creative consultancy both directly with clients like Apple, Disney, Sony, Sony Ericsson, Google, Yahoo! and through work in agencies like The Barbican Group and Frog Design.

Particle brings positive and energetic relationships with Google and the Chrome team specifically, as well as great Apple relationships and execution experience around iAds, iTunes Extras, and Apple.com. We have participated in and piloted much of the technology which will display the next generation of advertising and deliver media content for the next decade.

Particle specializes in a subset of web development that it sees as being at the core of the next generation of applications both on the web and embedded in various contexts. HTML5 and the WebKit rendering engine already drive the web experience on devices like the iPhone, iPad, and Android, but are increasingly becoming the lowest common denomination on the desktop web in next generation browsers like Google’s Chrome, and Apple’s Safari. Particle has chosen to focus on this technology so intensely because we believe it will soon be the rendering engine that powers a new universe of light weight and embedded applications from set top boxes to game consoles to Chrome OS and Android devices to portable telephony and media devices of all kinds.