Facebook is seeing more mobile usage and wants to ensure those users aren’t spreading scams and malware so today it begins offering free mobile anti-virus software, starting with Android. The expansion of the Anti-Virus Marketplace also adds 7 more security companies so 12 are now providing software and contributing data to Facebook’s URL Blacklist system that scans trillions of clicks a day.

Since Facebook’s users are so tightly interconnected, it can be a vector for security threats. If one user gets tricked into pasting their access token into a malicious site, their account can be taken over and used to spread spam and scams through Messages, wall posts, and the news feed.

That’s why its so important for Facebook to educate users on cybersecurity, and give them tools to protect themselves. 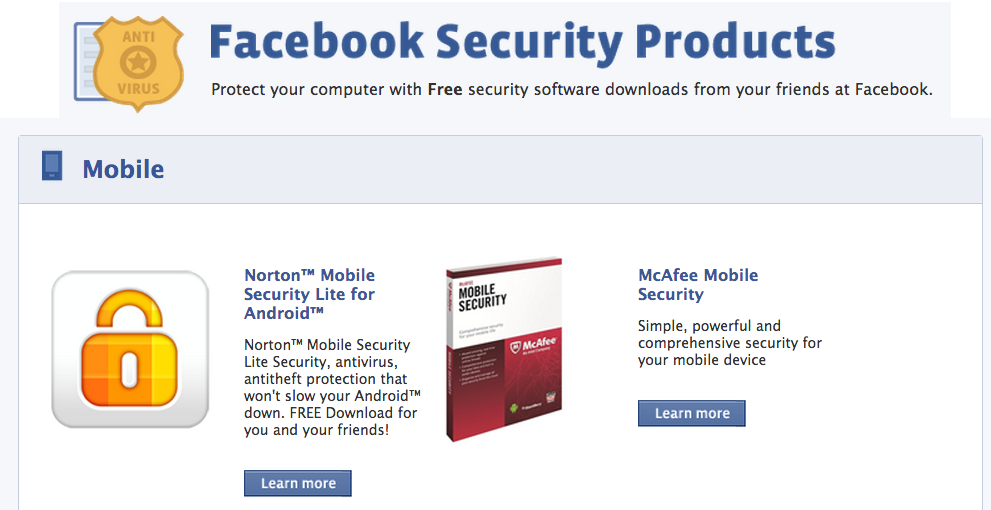 To that end, Facebook launched the AVM six months ago and it has already seen 30 million visitors. The PC and Mac downloads help protect users from existing viruses and those they might be attacked by in the future.

Today Facebook adds security software from avast!, AVG, Avira, Kaspersky, Panda, Total Defense, and Webroot to the marketplace where users can already find downloads from existing partners Microsoft, McAfee, Norton, TrendMicro, and Sophos. The downloads are all free and range from full to 6-month licenses.

And now the AVM also includes mobile security software. Facebook’s security head Frederic Wolens tells me “At first it will be Norton and McAfee who will offer mobile anti-virus software trial versions for Android.”

As part of the licensing deal, it seems users can only download one mobile security software package, so they’ll have to choose between Norton Mobile Security Lite for Android and McAfee Mobile Security. They both offer virus protection, remote lock and wipe, find my phone, and the ability to block unwanted calls and texts.

Facebook’s Chief Security Officer Joe Sullivan tells me “As people increasingly use their mobile devices to share and communicate, it is important that we can empower people by providing them with the software to protect themselves and their devices. We look forward to offering even more products for more platforms in the near future.” The last part hints that iOS security software may be added to the AVM soon, though tighter control on Apple’s mobile OS might make such software less powerful than Android counterparts. 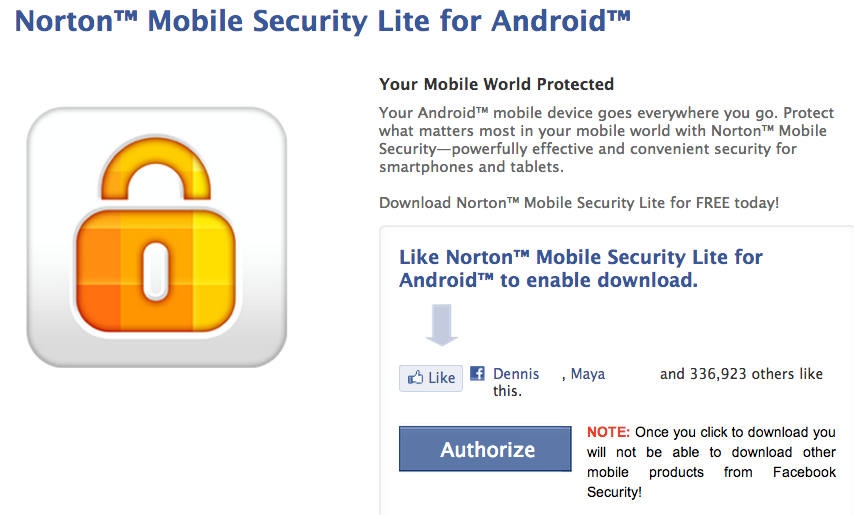 Along with the URL Blacklist and the AVM, Facebook has ramped up security with the launch of its phishing reporting hotline phish@fb.com and its malware checkpoint.

The security partnerships are a win-win-win for the vendors, users, and Facebook. These security companies get exposure and deployment. If they’re offering 6-month trials, some Facebook users might convert into paying customers. Meanwhile the users get free software, and a cleaner Facebook experience.

And in the end, pre-emptive protections against security threats reduce headaches for Facebook and may help it cut costs. Better to have software built by the best in the industry protecting the site than needing paid employees to fix problems after they’ve happened.

Security will only become more critical to Facebook over the years as it grows its role as a payments and identity provider. If it wants more people adding all their personal information and credit cards, it needs initiatives like the Anti-Virus Marketplace to make its billion users feel safe.