During a fireside chat at Federated Media’s San Francisco headquarters, Twitter CEO Dick Costolo sat down to talk with John Battelle in the warmup for Battelle’s first ever OpenCoSF event tomorrow, which is focusing on the spirit and ecosystem of tech.

Eighty-five different locations will be visited, which is a pretty new spin on an event. It’s basically a moving tour throughout the city and the startups that inhabit it. It’s officially “innovation month” thanks to Mayor Ed Lee, so Dick Costolo came to speak about just that.

Battelle asked Costolo about how it has been to find himself on magazine covers, The Today Show, and Charlie Rose. Costolo took it in stride and was very open about a “Chris Farley” moment he had at the Charlie Rose show:

I blanked and thought: This. Is. Awesome.

Costolo also discussed moving Twitter to its new offices, which some think isn’t in the best of neighborhoods. However, Costolo shared that co-founder Ev Williams was bullish on moving into the large, empty space. The office is actually quite gorgeous and the area it’s in is getting cleaned up quite a bit. It’s historic, and Twitter definitely wants to weave that into its culture.

Luckily, the city of San Francisco afforded Twitter some tax breaks which made such a huge move and build-out possible. Costolo said that when the company “did the math,” he realized that it would have to work with all aspects of the city to set up what it wanted to do in the building.

The two obviously have a great relationship, as Battelle poked fun by asking Costolo why Twitter hasn’t installed a slide in the new office as of yet. Costolo did get serious when it came to talking about keeping the company in San Francisco. He said: “Twitter is a city company,” and says that the company has three floors at the new office, which houses 1,200 employees. 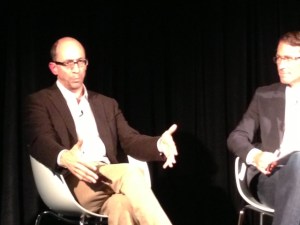 When it came to the actual business of Twitter, Dick Costolo said that the company was well-positioned for the future with its ad platform. As far as the future of the service, Costolo feels like there’s a lot of room for growth. Battelle asked him what he felt was the biggest misconception about Twitter and Costolo quickly replied: “That you have to tweet to use Twitter.”

That statement is important as we watch the service transform itself into more than just a communication medium or a social network. It’s a news source, and a way to discover new people and things. Brands are frothing at the mouth to work with Twitter, and TV networks want a piece of the action.

Regarding how the outside world views Twitter and its size, the CEO isn’t worried about what people think so much. Making sure the company moves fast is the important part — he says the company spends a lot of time to make sure it drops “barnacles” that slow it down. Costolo is in charge, and the company continues to march forward loudly.