Ride-sharing has become extremely popular in San Francisco, as a couple of startups have emerged to offer low-priced transportation alternatives to taxis and Ubers all around town. So far, Lyft has been getting most of the attention here, thanks to its flashy pink mustaches driving around town and its company culture. But competitor SideCar will likely be the first startup in the space to expand outside the Bay Area, and it’s raised quite a bit of funding to do so.

Like other peer-to-peer marketplaces for ride-sharing, SideCar has a platform for connecting drivers with passengers looking to get around. It’s released mobile apps for iOS and Android that lets users virtually flag down one of these drivers, and alerts drivers when there are potential passengers in their area. On the convenience side, startups like SideCar are an alternative to cabs, which have a constrained supply and are difficult to flag down, at least in San Francisco. They also provide a low-priced alternative to Uber, which is easier to get, but cost a hefty premium over typical cab fares. 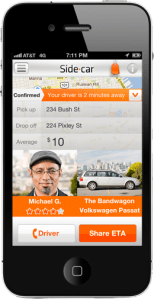 SideCar just launched in June, but it’s already got hundreds of drivers who have given more than 50,000 rides over the last few months. With that momentum behind it, the company is looking to begin operating in other markets soon. According to founder and CEO Sunil Paul, SideCar is looking to roll out on a city-by-city basis, with the first new market being announced at some point over the next few months.

SideCar is looking for other cities like San Francisco — dense urban areas where taxi supply is at least somewhat constrained. It’s hoping to expand into metropolitan markets that aren’t widely spread out. It could also possibly operate in sub-markets, like Venice and Santa Monica or Hollywood and West Hollywood in Los Angeles, rather than trying to tackle the entire city.

But when it does open for business in other markets, SideCar will have some operational and regulatory challenges to face. For every new city it enters, it will have to go through the process of vetting and hiring new drivers, and as a result is looking to use the funding to attract a senior-level operations exec to help handle that expansion. SideCar will also be leaning somewhat on Justin Caldbeck from Lightspeed, whose firm has invested in other localized marketplaces like GrubHub and LivingSocial, and who sits on the board of TaskRabbit.

On the regulatory side, Paul said the company expects some friction from local regulators and entrenched interests in new markets. And, in fact, has already gotten some attention from regulators in its home market of San Francisco. In August, the California Public Utilities Commission issued cease-and-desist letters to SideCar and other ride-sharing startups, seeking to crack down — or at least better understand — all the services that have cropped up over the past six months. While Paul has said SideCar has has productive conversations with the CPUC, the company has continued hiring drivers and offering transportation alternatives to users in and around San Francisco.

That’s also been the experience of on-demand car service Uber, which has its own city-by-city rollout underway. Now active in more than 30 cities, Uber has faced regulatory and government scrutiny in some of the biggest markets it’s entered, including San Francisco, New York, Chicago, Boston, and Washington, D.C. While SideCar will likely see similar scrutiny for helping unlicensed drivers to get paid to cart people around their cities, the new funding will help give it purchase some legal support along the way.

Like other startups, SideCar is seeking to protect itself by carefully vetting drivers before getting them on the road. It’s also working to get a supplemental insurance policy in place for drivers while on duty — something that Lyft has already done — but it’s not quite done yet.

In the meantime, the new funding will help SideCar boost its headcount, as it attacks new markets. The company has about 20 full-time employees today, Paul told me, but it will be doubling that over the next four-to-six months as it expands. In addition to operations, it’s looking to hire product and engineering talent, as well as more customer support in its San Francisco headquarters.