BlackBerry-maker RIM demoed another pre-release build of BlackBerry 10 in London today – including showing the camera Timeshift software working in real-time, and detailing a feature which allows BB10 users to switch between a personal and work mode. The latter sandboxes all corporate content and apps, meaning this portion of the phone’s data can be controlled (and remote-wiped if necessary) by the IT department — without also blitzing your personal stuff.

The new UI is a big departure for the BlackBerry-maker – as indeed it needs to be. RIM says BB10 is being designed to power the next five to 10 years’ worth of BlackBerrys — assuming it can look forward to five-or-more-score years in such a competitive technology space. Of course it’s no secret RIM’s been having a tough time in recent years, as it tries to shift off its legacy mobile OS software to a new generation, BB10, built on QNX, but there are some rays of hope amid all the gloom too.

The word RIM continually uses to illustrate its ethos with BB10 is ‘flow’ – by which it means that various types of content can be pulled in quickly from just off screen (and layered over other content). For example, the UI allows you to glance into the universal inbox by using an ‘up and over’ swiping gesture. Equally, you can use gestures to glance at your homescreen widgets from the lockscreen view without having to entirely unlock the phone. 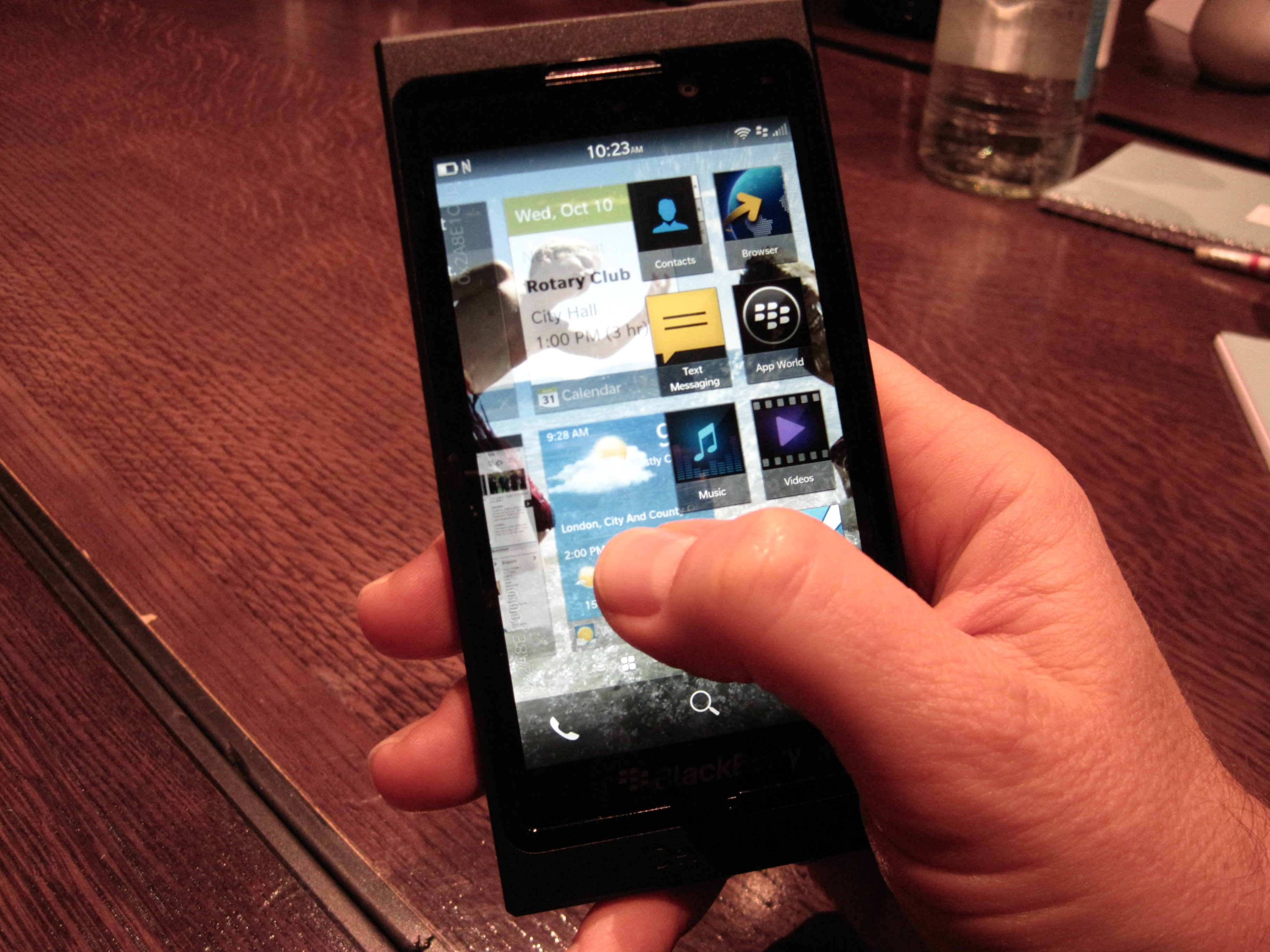 Today’s demo was not a complete showcasing of the BB10 software as parts of it are clearly still a work in progress. Hands on time was limited to swiping around and trying the various gestures used to navigate apps and menus (there’s no back button — it’s all done with swipes), and trying the keyboard. Other areas — such as the new App Store — were shown off during the demo but not accessible during hands on time.

While today’s demo looked generally solid — with smooth, fluid transitions — there were also areas where it looks a little rough round the edges (notably the camera software). Hopefully RIM will have ironed out any bugs/glitches by the time the software ships. The due date for BB10 remains unchanged since the last shipping update from RIM: Q1 2013 — so to be clear, that means any time in the first three months of next year (for the record, a March shipping date would still be Q1). Two devices are planned for launch: one fully touchscreen, one with a physical Qwerty.

Other bits of the BB10 puzzle remain to be confirmed. RIM uses Microsoft’s Bing search and maps on extant devices including its PlayBook tablet, and elsewhere TomTom is a supplier to RIM for maps data but the BlackBerry-maker would not confirm any names for who it will use to power search and maps in BB10.

Another thing to flag is battery life: the days of RIM being able to boast about its exceptional longevity vs rival smartphones are coming to an end. While the company says it is putting “an awful lot of effort into battery management” — all of this knuckling down is aimed at ensuring “we get a full day’s use out of this smartphone at launch”. A full day’s use will put a BB10 smartphone in the same category as scores of other rival smartphones. There are smartphones out there that can’t last a day, and others that can last a few days, but BB10 looks like it’s lining up to be just another piggy in the middle on the battery front.

Read on for a breakdown of the features demoed by RIM today.

The BB10 lockscreen includes a dedicated camera button at the bottom right hand side, a notifications bar at the left, plus the date and time in the centre. Impending calendar events can also be displayed. Unlocking is achieved by sliding up — but it’s also possible to take a sneak peak at homescreen content by partially sliding a finger over the screen without having to fully unlock the device.

These are displayed on a sidebar that sits off the lefthand side of the screen – the bar has to be pulled on screen to view (with the exception of the Lockscreen, which displays notifications at all times). This is a departure from Android’s philosophy of larding notifications at the top of the screen. RIM says it wants to keep notifications tucked away off screen in order to maximise screen real estate — the downside is you can’t immediately see whether there are any new messages etc. This could end up giving BB10 users a nervous thumb-twitch — i.e. as they keep checking to see if anything off-screen needs their immediate attention. 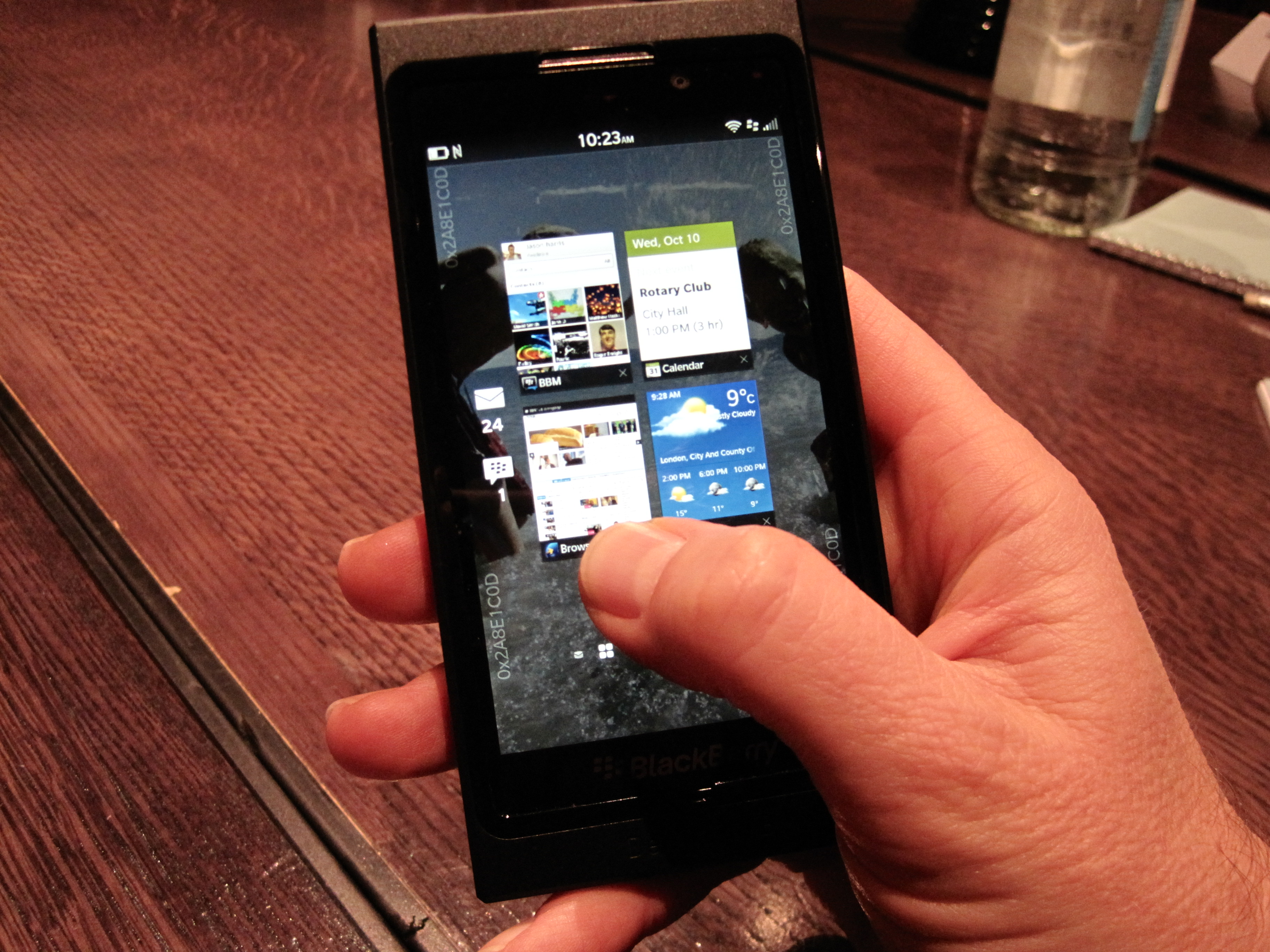 The homescreen consists of up to eight widgets (four per screen). Any apps can be displayed as widgets, not just native apps — RIM says its APIs give developers “deep access” to the platform. Homescreen widgets are chosen by users when they first set up the device and – contrary to some reports — do not change dynamically based on app usage. The widgets themselves can dynamically update to show more recent info. Sample widgets on the demo device included a weather widget, calendar, BBM and a browser widget. 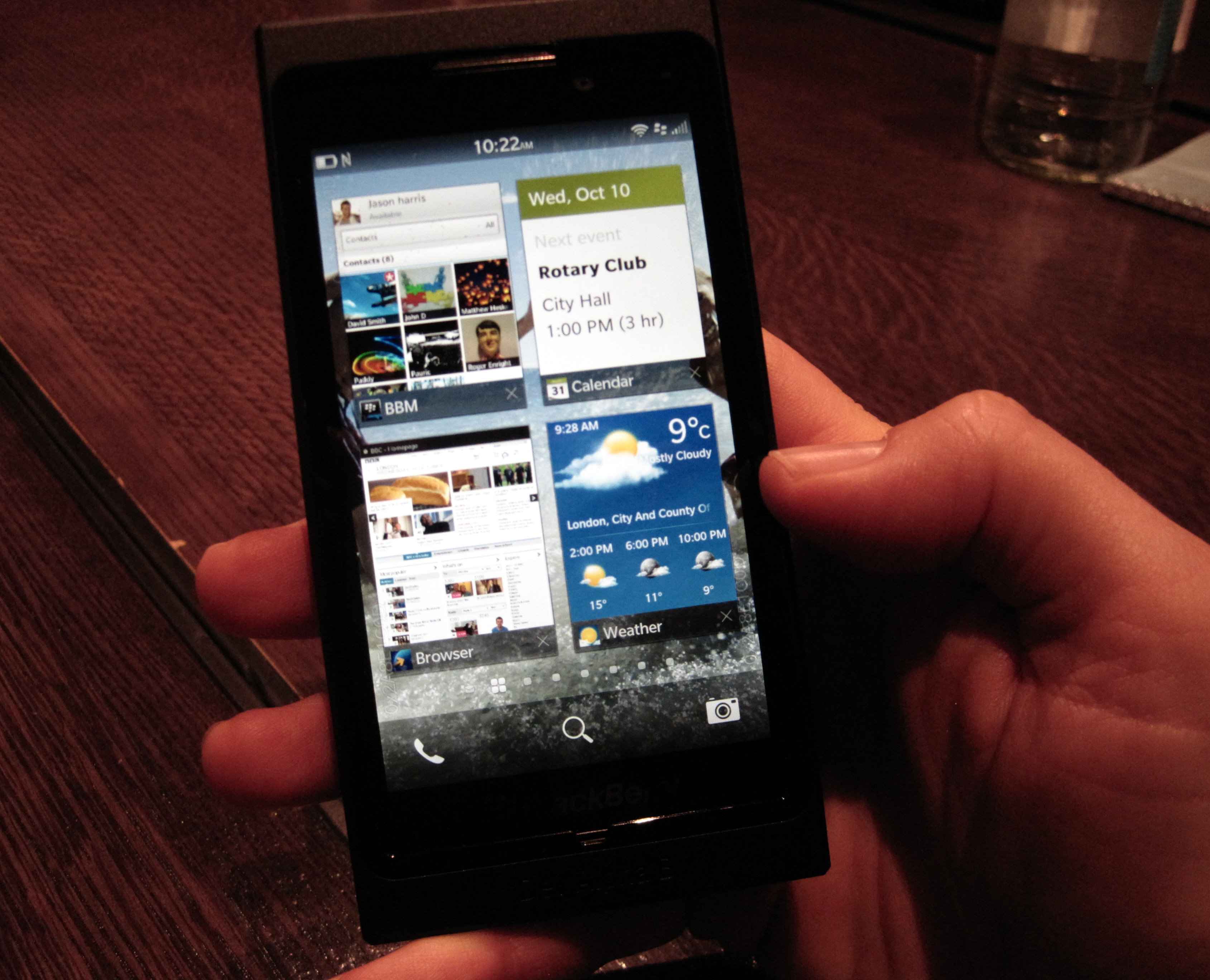 BB10 has a universal inbox for all comms — whether it’s traditional email messages, texts, Tweets or BBM. The inbox can be accessed at any point by swiping up and over to the right to pull it on screen. The inbox view can also be filtered so you can see one particular set of comms at a time — the menu for slicing and dicing your inbox data sits just off screen, and is once again pulled on screen with a swipe. Swiping down from the top of the inbox view also brings in an overview of the calendar. Again the ethos is that you can quickly cross-reference various bits of data in one place without having to navigate into and out of multiple different apps. 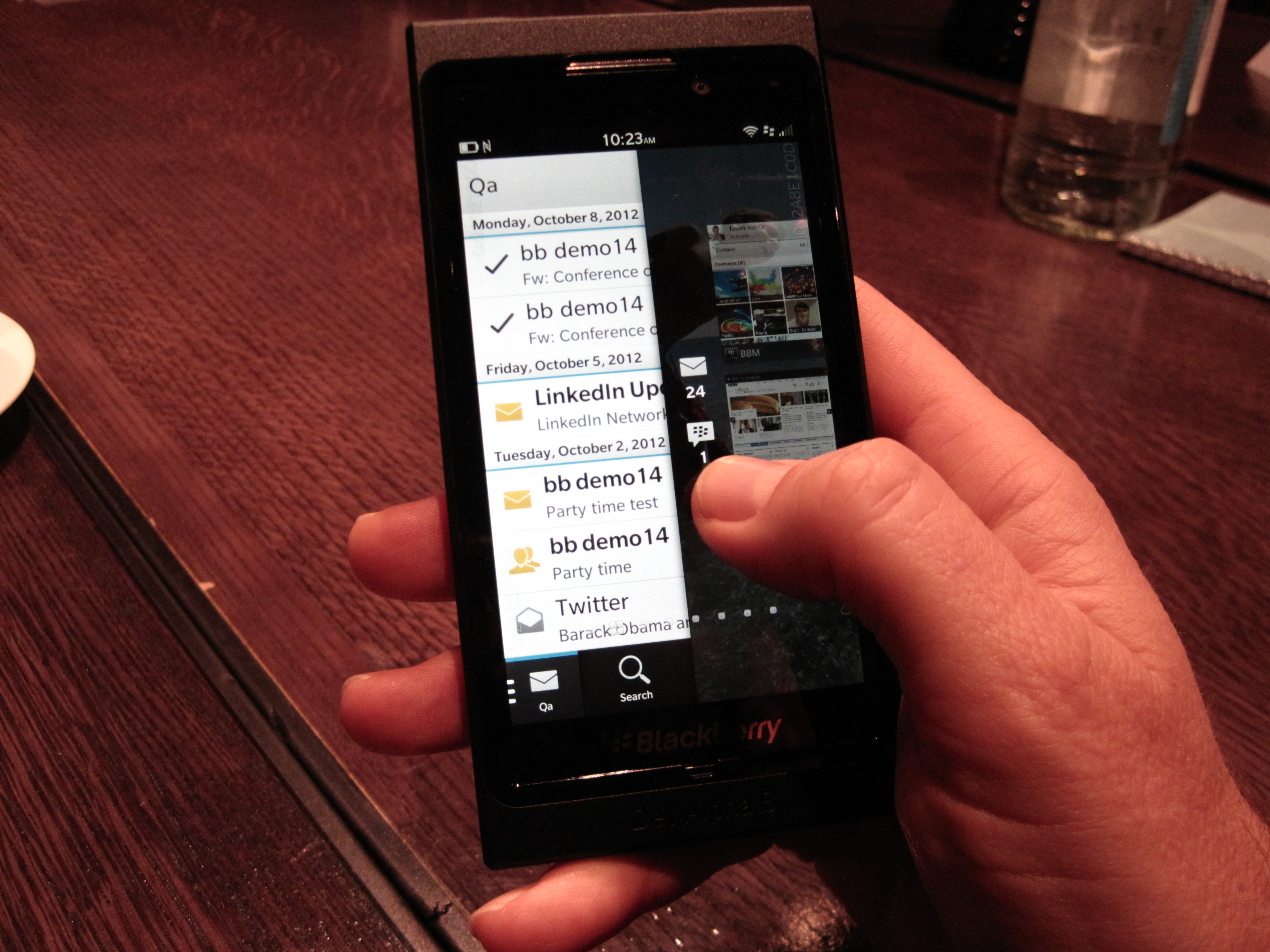 RIM’s shown off its forthcoming ‘smart keyboard’ software before, which will be used in full touchscreen BB10 devices — and today’s demo didn’t offer any major new revelations on previous showings. The main twist remains a feature that positions suggested words above the next letter that you’d have to type to spell them out. So, for example, if you type ‘Roger” the word ‘Federer’ might appear above the ‘F’ key as a potential shortcut to speed up typing. To include one of these suggested words in your message you swipe up over it. While it seems like a neat idea, in practice it looks a little fiddly — and will certainly take some getting used to. RIM’s demo rep certainly wasn’t rattling out sample messages at great speed. At the bottom left of the keyboard there’s a globe button — to configure language support so it can recognise foreign spellings. 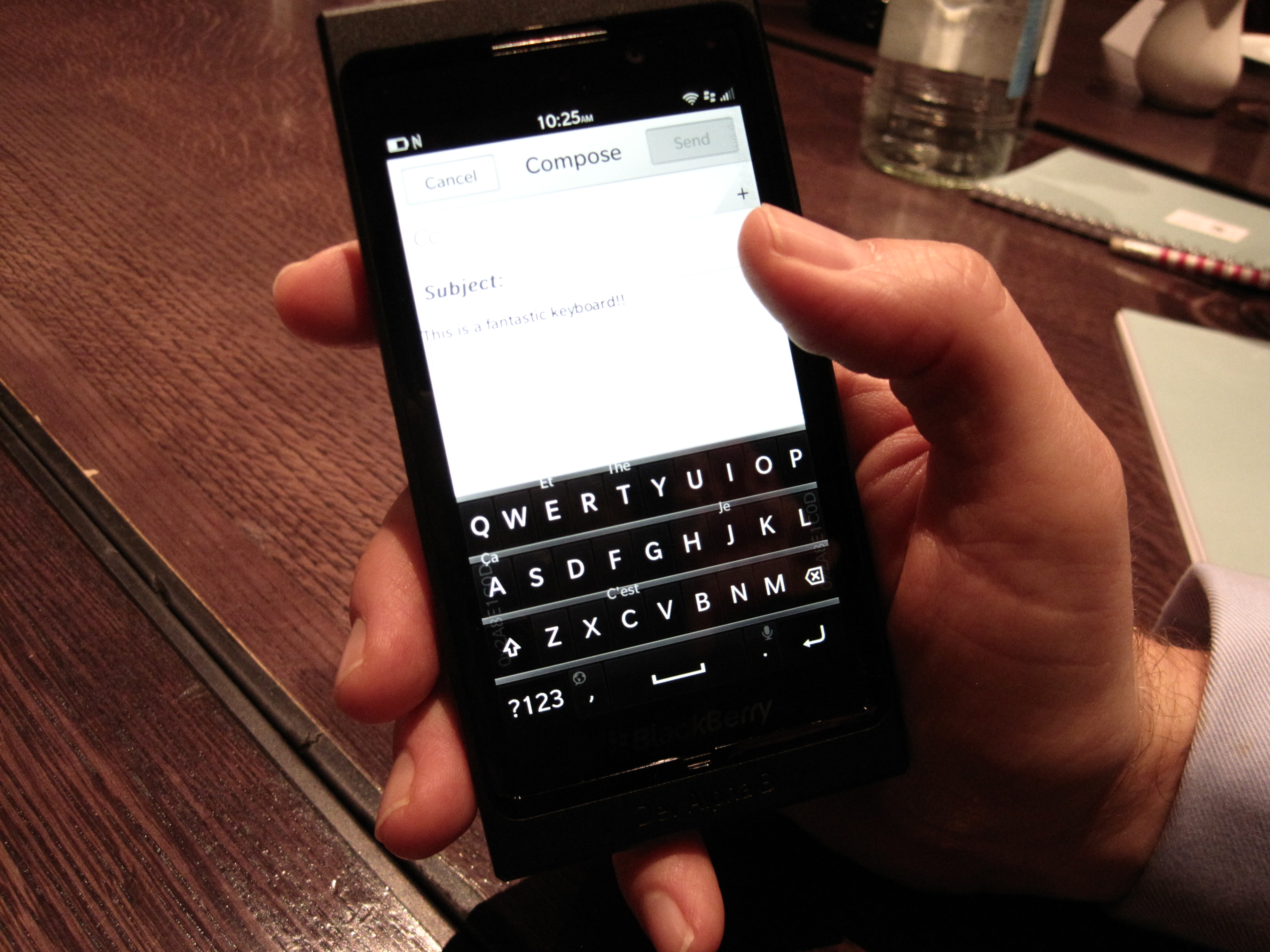 The virtual keyboard also some other tricks up its sleeve: it customises to its owner in a way that a physical QWERTY never can: the central strike points of each key can move by up to half a key to adjust to your particular typing style (with the aim of reducing typos). The keyboard software also analyses your messaging history to learn more about the language you use — and will apparently incorporate what it learns about your vocab and slang into its next-word suggestions.

A corporate BB10 is not one device: it’s two, with work apps and data segregated from personal apps and data in a “fully sandboxed perimeter” — with the aim being to avoid sensitive corporate data bleeding out via insecure consumers apps and the like. This separation of church and state has been added to BB10 to please RIM’s traditional heartland of CIOs and IT chiefs — which it reckons are feeling put upon in these fly-by-night, BYOD times. When the phone is switched from work mode to personal mode (done by pulling down a menu and toggling from one to the other), all corporate apps and data disappear, and vice versa — although if you want to be able to see your personal comms in your work inbox you can configure it display them, says RIM. The dual mode has the added advantage of allowing business folks to avoid work email, etc. for the weekend by switching the phone over to personal mode and pretending all those unread work missives don’t exist. 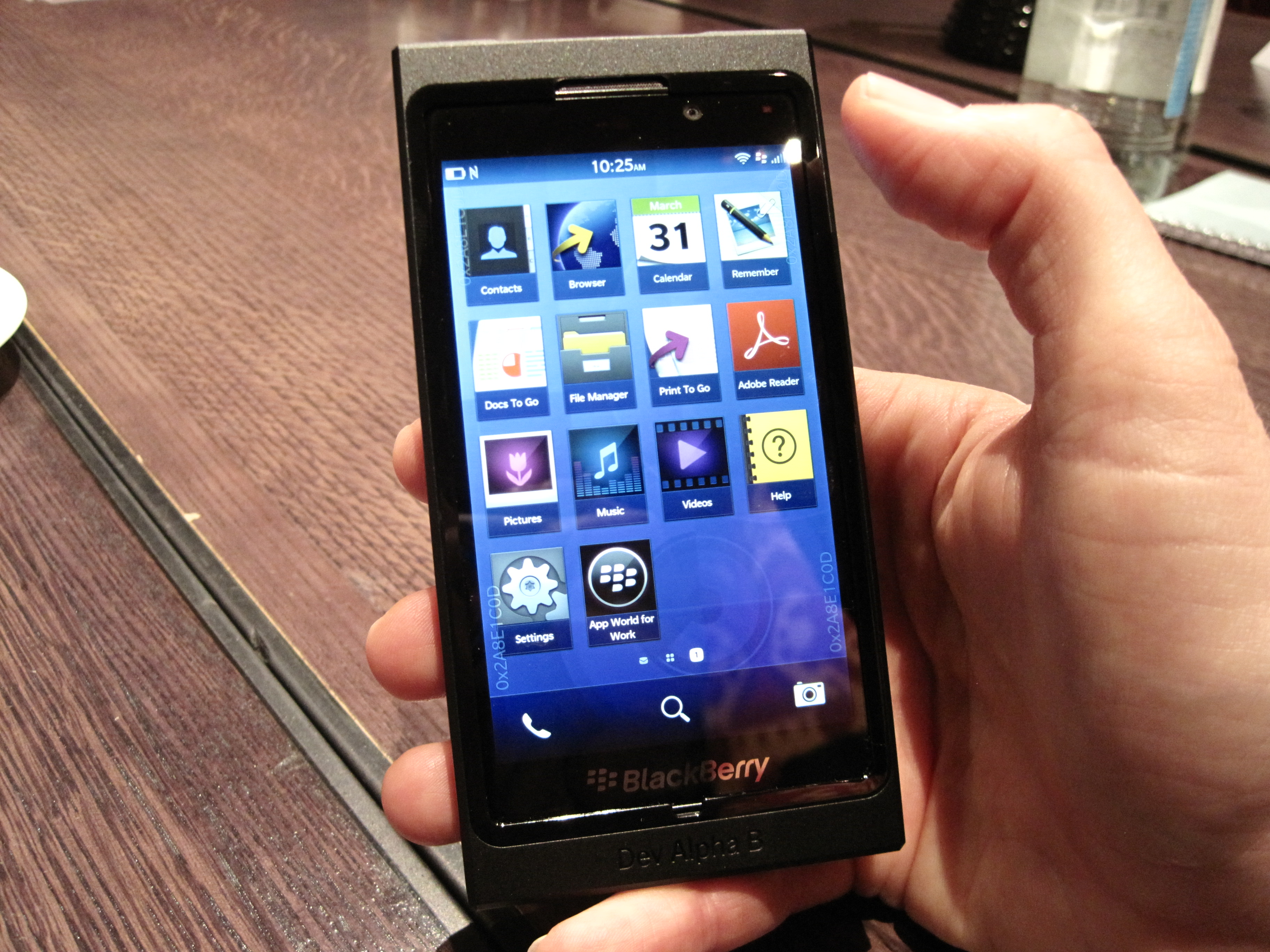 The browser is based on Webkit and includes full support for Flash and pinch to zoom. Tabs and bookmarks can be viewed by pulling them on the left-hand side of the screen with yet another swiping gesture. The browser includes a reader mode view which repackages web content to give it a “clean text look” — surely a Flipboard-inspired feature — decluttering and simplifying formatting for the smartphone form factor and to avoid the need to do lots of zooming in and out. Other options on the browser include the ability to change the font size, and a share button to make it easy to send links to others. 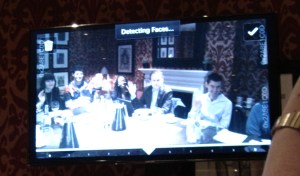 RIM wasn’t letting anyone poke around the camera interface but it did demonstrate the Timeshift feature in action up on a big screen — I’d previously seen a video of this, but today got to see a real-time demo. The software is similar to that found on some Android phones which effectively take a video before you hit the shutter button in order to allow you can choose from a selection of stills after the fact. RIM’s take is a little more nuanced — it includes a clockface-style dial that allows you to rewind or go forward in time from the moment you press the shutter to pick the best facial expression (faces are picked out via a facial recognition algorithm). There’s then a second, liner slider at the bottom to allow you to choose the preferred pose for the rest of the shot. The final photo is then a composite of both selections — so much for the camera never lies.

As well as the usual contact data (telephone number, email etc), BB10 displays additional up-to-date info about the individual sourced from the internet and social networking sites such as LinkedIn. Tapping on an ‘updates’ button on a contact’s page will display a stream of online search results relating to the person (it’s not yet clear who RIM’s search partner is for this service, or for the rest of search on BB10). 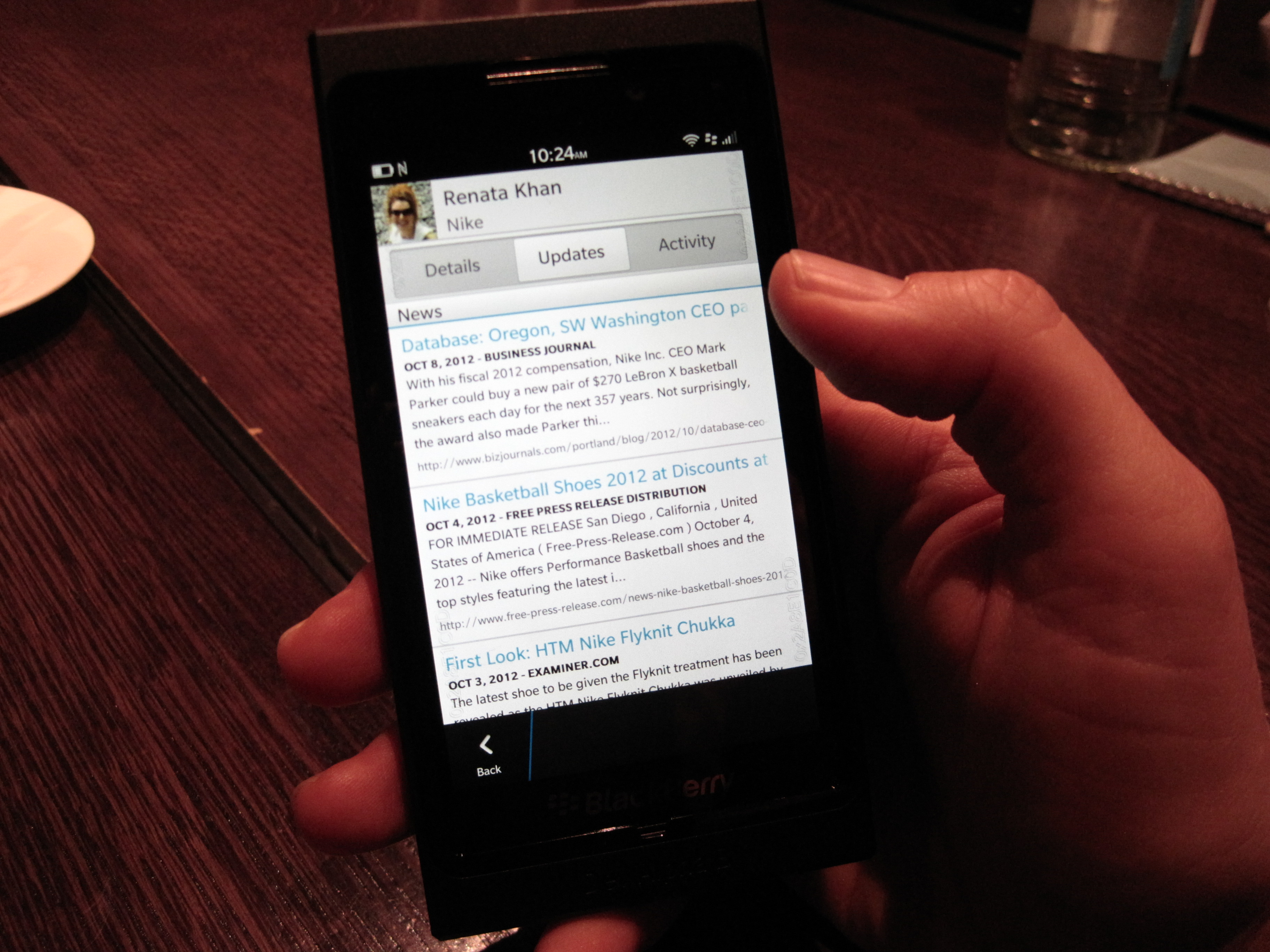 Another menu can be pulled down from the top of the screen — which on Android and iOS brings up the full notifications tray but on BB10 this is where settings shortcuts, including buttons to toggle Wi-Fi and Bluetooth on and off, are found.

There’s a new look App Store for BB10 with a promo carousel flagging up featured apps at the top, and sections for trending apps and games. Music — and in some regions — video content will also be sold via the store (RIM hasn’t announced who it’s partnering with for music or other media content). To date, the company said it has distributed just over 5,000 developer devices — and expresses confidence about the number of apps that will be on the platform at launch (without providing any numbers).