Here’s the deal: Facebook is playing around with search right before our eyes. CEO Mark Zuckerberg even alluded to that fact at Disrupt.

Today, Facebook introduced a revamped Help Center on its site. That might not sound like a big deal at first, but when you think about how many users are on the site daily, it just might be the most important feature that the public company has to offer these days. Facebook can’t have the same loosey goosey attitude it likes to have about rolling out and testing new features if it doesn’t have a solid Q&A/Help offering.

This could be the beginning of its approach to search, and it could be the answer to what Zuckerberg described as “uniquely positioned” when he talked about Facebook’s efforts in the vertical.

To me, the Help Center looks a little Microsofty/Metro’y, but that’s neither here nor there. It’s nicely laid out and gives users a comfortable area to seek out answers to their questions, no matter how “stupid” they might feel they are: 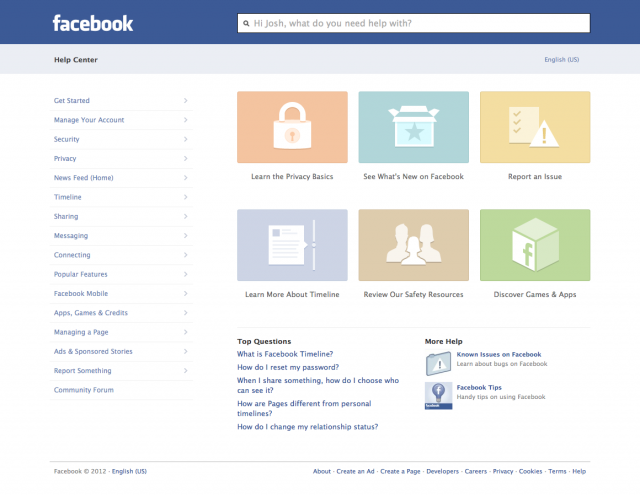 The layout is nice, the copy is nice, and it feels like the right way to let users begin their hunt for answers. This is important, because Facebook wants to do search. According to both Google and Zuckerberg, the future of search is finding answers to your questions and queries, not simply showing you a results page that has nothing to do with what you are asking.

Let’s cut the crap. Facebook has sucked with customer support in the past. I’ve heard horror stories from friends who couldn’t upload profile photos and never heard back from anyone at Facebook. Horrible and stale FAQs were all that Facebook had to offer for quite some time, and it never looked like the company had any interest in making it a better experience.

Now that the company is public, it has to up its game and be consumer friendly. I’d argue that Facebook’s Help Center is well on its way to becoming one of the best of any social property on the web. Twitter’s is OK, but it has a lot of crappy and unhelpful jargon mixed in. That’s mostly because it’s for users and developers — or so it seems.

By turning up the juice on its Help Center, Facebook is now diving into the Holy Grail of search: connecting people with questions to relevant answers quickly.

The Future Of Search

When I sat down with Jack Menzel of Google, we talked about the history of search and what’s next. He said something very interesting that has stuck with me:

The future of search, the way we think about it, is that we want to be able to answer any question. It’s important to not just think of it as “trivia,” though. For example, I want to buy a fuel-efficient car. There’s no real solid way to return an answer that simply says “Tesla.” There’s a process, including good sources, you’ll go to those sources and read reviews. The answer to the question (the future of search) is that we’ll be able to understand more about what you’re asking.

What better way for Facebook to sink its teeth into this “future” premise than with its Help Center?

There are other players in search, led by the giant itself, Google. I’m going to stay away from drawing comparisons or pitting two companies against each other for now, because it’s not really relevant at this point. One of Facebook’s strategic investors and partners happens to be Microsoft, so we could do a whole other piece on what part Bing plays in all of this, but not today.

Hack The Planet Of Search?

We reached out to Facebook to see if there was anything we could learn about the Help Center team or if there’s any similar overlap on other search efforts within the company. We haven’t heard back. But keep an eye on this story. Today’s release signifies something huge. Something focused. And when Facebook is focused, watch the hell out.

Search today won’t be search tomorrow, and I for one am excited about the possibilities.