“The WWW project was started to allow high energy physicists to share data, news, and documentation,” Tim Berners Lee wrote in his Usenet post announcing the World Wide Web in 1991. “We are very interested in spreading the web to other areas, and having gateway servers for other data.” Today the “other areas” part has been tremendously successful, but some scientists wish the web was better at its original goal of helping them share information with each other.

That’s why a pair of grad students has created Plasmyd, a search engine and centralized discussion hub just for scientists.

Plasmyd, named after the DNA molecule plasmid, has over 60 million papers indexed. “We have pretty much all the papers,” co-founder Adnan Akil says. Each has its own page on the site that includes its abstract, a link to the paper and an area for leaving comments. Akil hopes it will become the de facto place online for scientists to discuss papers. 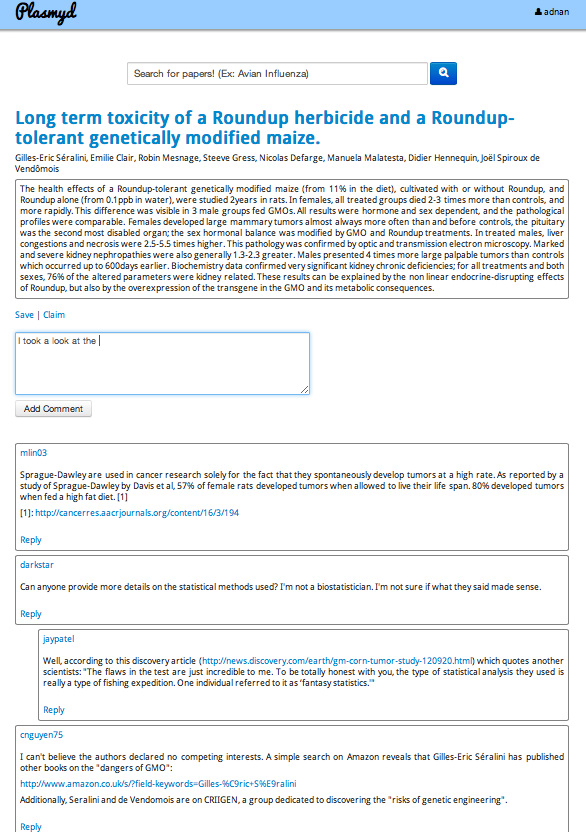 Akil is a second year graduate student at the University of California Irvine studying stem cell biology. He and his co-founder Kevin Wu, a second year graduate student at UC San Diego studying bioinformatics, were frustrated by existing search and discussion options like Google Scholar, PubMed and Mendeley. Each of these made it possible to track down individual papers, but it didn’t provide a way to see what other scientists thought of the papers or to ask questions of the scientific community.

“Google Scholar is a pretty good search engine,” Akil says, “But we went and talked to them and discussion is not what they are focused on.”

And although papers are discussed indirectly on sites like Reddit and Hacker News, they tend to be about news articles written by lay people for lay people. Akil and Wu want to have a site strictly for discussing scientific papers.

For now Plasmyd isn’t screening the credentials of commenters. Moderation is handled through up and downvotes, just like Reddit and Hacker News.

The team hasn’t raised any funding yet, but they do have a business model in mind. “We’re still idealistic grad students, but our market is pretty niche,” Akil says. “There’s only something like one million scientists in the U.S.” But he says scientists have a big say in how lab budgets are spent, and companies selling equipment and supplies have few ways of directly marketing to scientists.

That could be a big opportunity for Plasmyd, if the service takes off.