Apple today released its iOS 5.1 update, which brought a number of new features to the table, including the ability to set up custom network configurations using Apple Configurator, the device management tool Apple offers through the Mac App Store for management of multiple iOS devices across an organization or household.

Apple doesn’t go into detail about what exactly you can do with the new network configuration options, saying simply that it allows users to install configuration profiles “to configure Wi-Fi and Ethernet corporate networks,” but it’s very possible that this could also open the door for users to employ virtual private network settings on an Apple TV, meaning that they could potentially get access to U.S. region-locked streaming services like Hulu Plus beyond American shores.

Of course, that’s bad, don’t do that. But if you were so inclined, you could give it a try and let us know what you think. I’m hearing that getting Configurator to properly prepare Apple TV units for device management isn’t working just yet, but this could be because an update from Apple for that piece of software is still required and will be fixed soon. After all, there is already a brand new Knowledge Base article on Apple’s website about the procedure for updating Apple TV network settings from within Configurator..

If you’re looking for other additions, the Apple TV update boasts quite a few, including support for the new Shared Photo Streams introduced in iOS 6 and AirPlay for audio from Apple TV to other sources, whereas before now it’s always been only the other way around.

Full details about what’s included below, as per Apple’s official update notes: 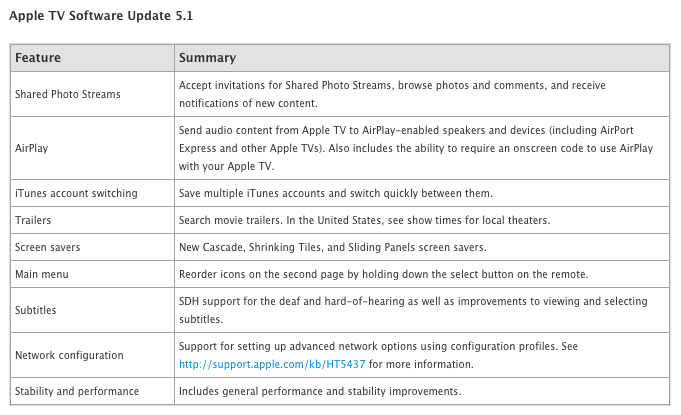