I’m a fan of maintaining as a direct a route between my stomach and food as I can, but that’s the sort of proposition that gets dicier when multiple people are involved. As it happens, multi-person catering crises is exactly the problem that Airbnb veterans Chris Collins and Carly Chamberlain have decided to tackle with their latest startup, CaterCow.

“Catering is broken in three ways,” co-founder Collins said shortly after taking the stage at ERA’s third Demo Day. From his vantage point, it’s difficult to find quality caterers, confusing to wrap your head around their pricing structure (everyone seems to do things a bit differently, after all), and a hassle to pay the caterers for their services.

CaterCow aims to eliminate those issues in one fell swoop by providing local caterers and restaurateurs a one-stop shop for selling and publicizing their services in exchange for a flat 11 percent of each order’s cost. By standardizing the process of discovering and ordering big group orders of food, CaterCow apparently wants foodies and event organizers to focus more on the experience they’ll get rather than the potential problems that go into getting that experience set up. 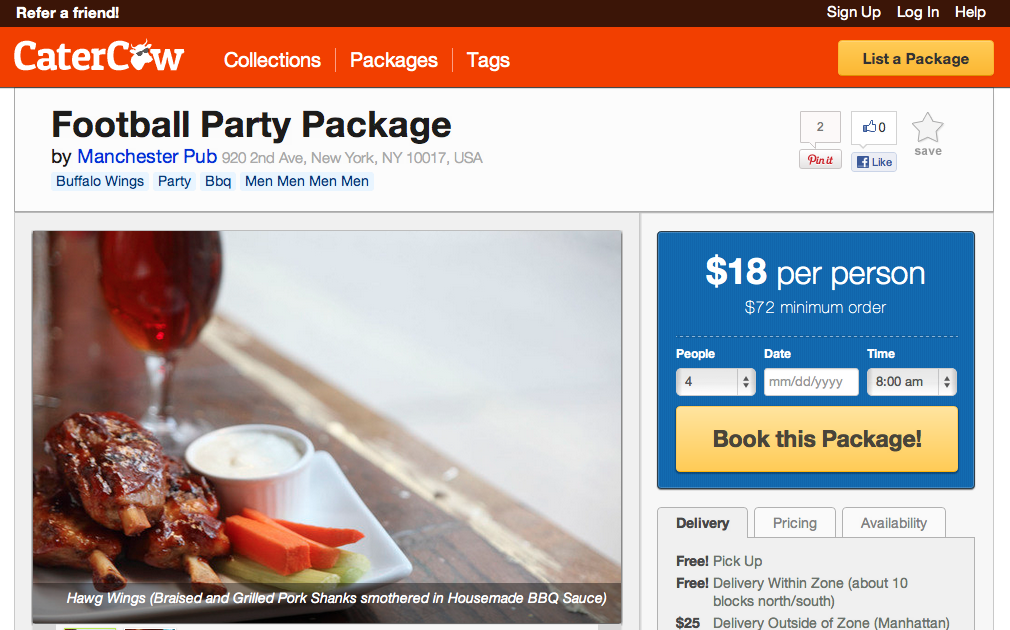 Of course, this space has already begun to heat up, and CaterCow is stuck competing with the likes of Cater2.me as well as the catering arms of services like Seamless. What really makes the service shine though is the variety — the culinary experiences to be found on the (rather handsome) CaterCow site really run the gamut — users can order relatively standard fare like charcuterie boards and vegetarian lasagna, as well as a local food truck to set up shop somewhere.

It’s worth pointing out that neither of the two founders are what you’d call “new” to the food-oriented startup space at this point; their previous project, Gusta, was geared toward building renown for chefs and restaurants by helping them host “unique dining events” that gourmands would pay to attend. Though Gusta is still kicking, there’s little question that its two-person team has more or less completely shifted its focus to its newest venture — Chamberlain told me the service is currently “on autopilot” for the time being, though she and Collins still answer the occasional support emails that come their way.

The service is a New York City exclusive for the time being but San Francisco is slated to get the super-simple catering nod sometime in the next three months, and then expand to the country’s top 15 metro markets within a year. A lofty goal for sure, but the service is slowly and surely building traction. The four-month-old company has already sold more than 100 catering packages valued in excess of $9,000. That said, the road ahead could still be a rough one since CaterCow only captures a relatively small fraction of revenue per transaction — they could probably stand to bump that up a bit (the recently launched Caviar takes a 25 percent cut, though its focus on highly rated food offers a bit more wiggle room), but it’s still early days for the team and there’s no shortage of hungry people out there.