There are a lot of dating sites out there and the world doesn’t really need another one. That’s why the young, New York-based startup, Grouper, calls itself an “online social club” even though its members go on “Groupers” (i.e. dates) and sometimes even end up in relationships. In fact, founder and CEO Michael Waxman met his current girlfriend on a Grouper. Instead, the site doesn’t promise to introduce you to the love of your life, a la eHarmony, just to give you a more fun, casual way to meet new people, especially when compared to the creepy, mechanical browse-and-message approach that prevails in online dating today.

After founding the company last year, Waxman and co-founder Tom Brown joined Y Combinator last winter (W’12) and since graduating have been trying to grow their user base, perfect their novel approach to online dating, and just generally build momentum. More than a few months in the works, Grouper is today officially announcing the redesign of its site and its expansion to 12 new cities.

The redesign is fairly straightforward, as you can see here. Until now, the Grouper team has been focused on building an awesome experience for their users offline, so the re-design just gives the site a new coat of paint and makes it more clear what Grouper is up to. They also added a stream of (anonymous) texts from “Groupers” (their name for dates, obviously) so that you can get a feel what the experience is like — the page is essentially Grouper’s version of Texts From Last Night.

Initially launched in New York and San Francisco, the online social club has found more traction in the last year, enough so that the co-founders felt that the time was right to expand into more big, metro areas. Today, Groupers are taking place in SF, NYC, Chicago, Boston, LA, Miami, Philadelphia, Seattle, Atlanta, Austin, Dallas, and Washington D.C. More than 10 additional cities (with some in Canada) are on the docket for later this year, too. So chances are Grouper will be in your hood soon if it’s not already.

But before we go any further, what exactly does this Y Combinator grad do? Grouper is essentially a spin on blind dating — in groups — where you don’t have to do anything but show up. The experience is focused on busy people who want to get out from behind their computers and catch up with old friends or meet new people. Unlike some, you have to apply to become a member of Grouper, which gives them a chance to vet applications themselves and keep out the creepers.

Once accepted, members sign in with Facebook and Grouper connects you to someone it thinks you’ll be compatible with. Eschewing public profiles, Grouper uses your application, Facebook info, algorithms and some of their own human curation to match you with a cool date. (In terms of the Facebook-proof element of dating, Grouper is hardly the only one doing this. Check out Circl.es or theComplete.me or Yoke, for example). 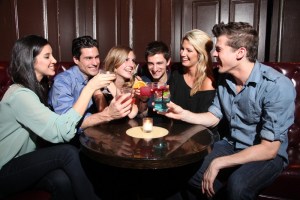 The cool thing, too, about this is that members just go onto Grouper and tell them when they want to go on a Grouper. The site takes care of everything else: It matches them with the right person, picks a cool location close by, makes a reservation for them and pays for the first round of drinks. Actually, members pay a small fee for every Grouper, and they have to shell out cash for the first round of drinks, but it’s all pre-paid so you don’t have to worry about it on date night.

Why pay for the first round of drinks? Well, it allows Groupers to get right down to business and, in the event the group of three sitting across from you sucks, you can walk out after the first round of drinks without having to sit through an awkward closing of tabs or just ditch them. And if Groupers end up going well, which the founder said the vast majority do, then people get to continue hanging out, buy drinks, go to another bar, etc. They don’t have to stay at the place they first met; that’s just done as a way to have a place for people to meet. There’s no requirement to hook up or get married to one or all of the people you meet, and if one conversation turns awkward or depressing, there are two more friends to chat with.

Waxman says that, so far, their members have shared thousands of drinks and that they routinely hear stories about Grouper bringing together couples, new friends, hook-ups and everything in between. In fact, members have already joined each others’ co-ed volleyball teams and gone karaeoke-ing. So you know it must be working. Or someone just really liked volleyball, either way.

But what’s the end game for Grouper? Waxman says that besides just getting people off their asses and meeting new friends, the founders would love to see Grouper become the offline social utility for you and your friends — so what Facebook is online, they want to be offline. They’ve got a long way to go on that one, but the online-to-offline movement is strong, especially among athletes, people with avid hobbies and, of course dating and socializing. So, there’s no doubt Grouper (and many others) are trying to tap into that.

And, if Groupers continue to go well, it could be a great opportunity for Grouper to leverage that with local merchants. Grouper works to get discounts on the first round, but sends six people to a bar who end up ordering three rounds of drinks, well, that’s a pretty good up-sell for the bar and a better business down the road for Grouper.

Also check out the soon-to-be-launched Tandem for another spin on two-on-two dating.

For more, Grouper at home here.