If you’ve watched television in the last year, you may have seen a commercial or a program  bearing a small blue icon with a black squiggle on it. That would be Shazam — the app that you’ve probably used to identify a song in the car or at the jukebox. Three days ago, Shazam announced that its app had been used by 250 million people (actually used, not just downloaded) and was expanding its TV efforts beyond partnerships by creating “a comprehensive experience for TV,” which would allow “users to tag any show on any channel.” [More in Anthony Ha’s coverage here.]

Those are pretty amazing numbers, considering some 900 million Android and iOS devices have been activated to date — that would mean Shazam is on close to 30 percent of those devices. But, when your co-founders show up in a Super Bowl ad celebrating innovation in mobile technology, it could happen to you.

That being said, you might think that the market has its music-identification king, but SoundHound would beg to differ. Just three days after Shazam’s announcement, the other music search and discovery app has responded by releasing some numbers of its own.

Today, the company quietly announced that it has passed the 100 million users milestone with no hubbub, no fanfare, just a press release. And this, too, according to Vice President of SoundHound Katie McMahon, tallies the number of people who have actually used the app, not just those who downloaded it.

To put this in context, Shazam was founded in 1999 and has been on the iPhone since 2008, whereas SoundHound was founded in 2005, launched first a year later (though the company might argue against that) and grew relatively slowly until its rebrand in 2010.

Either way, both have experienced growth that most mobile developers can only dream of, and knowing Shazam’s already high numbers, TV partnerships and SoundHound’s relative size two years ago, my first reaction when I saw this announcement was skepticism. Anthony Ha can attest that I actually said something slightly more profane. (“100 million? Horsefeathers! Dubious indeed,” or something like that.)

Certainly, SoundHound’s timing with this announcement is meaningful. The company doesn’t want you to forget that Shazam has a fairly serious competitor in the “Wait, what’s that song?” space. So serious in fact that SoundHound has seen an average rate of more than 200K downloads per day on Android and iOS — a rate which, at its highest, peaked at 1 million in a single day. 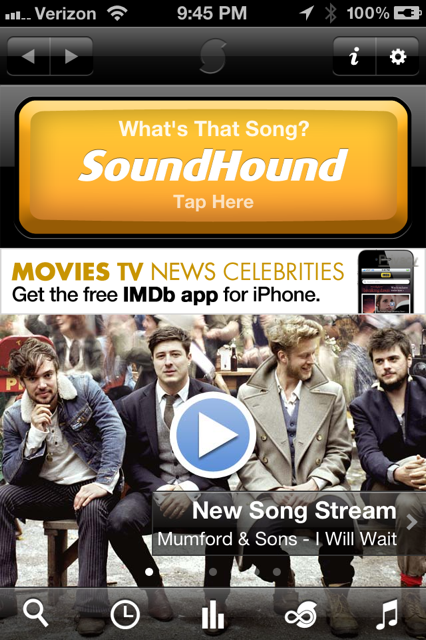 So how has SoundHound been able to do this without TV partnerships and a staff that at the start of the year was just 32 people strong? (Staff is now 65, by the way.) Partly, this is due to the fact that SoundHound comes pre-loaded on all HTC Android devices, so that helps. McMahon also tells us that SoundHound hit one if its first inflection points when Apple announced in 2010 that SoundHound was the most downloaded paid app of all-time on the iPad — this was right around the time of the its rebrand.

Its second inflection point came, she said, when they made the app free to download and took the limits off of how many queries one could use without paying. Naturally, user numbers took off. It also has to be mentioned, when talking about strategic advantages, that Katie McMahon, now the VP of SoundHound, spend almost six years as the VP of Business Development at Shazam. Yep. Katie was instrumental in the launch of Shazam’s iPhone app and was there until she joined SoundHound in early 2010. Clearly, having a Shazam insider on board during the early days to share what worked and what didn’t has been a boon for SoundHound.

McMahon said, of course, that the real core of the app’s success has been its technology — especially its Sound2Sound technology, which searches sound against sound, bypassing traditional sound-to-text techniques. When I first heard about SoundHound it was in the context of, “hey, this is that cool app that lets you sing into it and can still identify the song you’re singing.” The implication, at the time, being that Shazam couldn’t handle the dulcet tones of our angelic voices.

So, while the app counted integrations with iOS 5 and iCloud and forged a streaming partnership with Spotify last year, a big part of its growth is its technology. SoundHound owns all the technology that powers its apps, as Colleen Taylor pointed out last year, with three patents around voice recognition technology. If Siri doesn’t end up in our vehicles, it could be Shazam or SoundHound playing a role in that next frontier.

It really hasn’t been an overnight success, even though its acceleration in the last year and a half to two years has been ridiculous. I mean eBay has how many apps? 100? And it just crossed 100 million users.

Even if it’s still a good ways behind Shazam, this still has to be heartening for the small and still relatively young company. McMahon says that the next steps are building up partnerships with advertisers and expanding aggressively internationally, just as Shazam did before it. It may not have the same luck in TV in the U.S. in the near future, but there’s plenty of open space. And it’s all about creating that thoroughly addicting user experience, making SoundHound a hub for music search, song recognition, instant lyric display (so cool), music downloading and playback, and being able to expand artists’ reach through integrations with Twitter and Facebook.

But perhaps my favorite thing, and something that all entrepreneurs should pay attention to: When I asked Katie what the team did to celebrate, she told me that the company enjoyed some cake together in the office and that CEO Keyvan Mohajer said some words to encourage the team. But that was it, then it was back to work, “because we know that we have a lot of work left to do to make SoundHound better.”

There you go. Carry on then.