It’s hard enough just keeping your head above water as an entrepreneur or small business owner without having to worry about how you’re going to afford to build mobile apps. You know your business needs mobile apps, that you need to be where your customers are — regardless of platform or device. It’s for this reason that mobile apps-as-a-service businesses and DIY app builders are in such high demand, and so prevalent.

The market is flush with DIY app services, all catering to different use case — you’ve got open mobile frameworks like Sencha, Appcelerator’s Titanium and PhoneGap and SMB platforms like Bizness Apps and Apps Builder or enterprise-grade mobile platforms like Kony, Verivo, and Antenna — to name a few. Naturally, mobile is growing like gangbusters, so there’s plenty of opportunity and demand, yet the space is also crowded enough that it requires defensible business models, technology and a great product.

Founded in 2010, Los Altos-based GENWI set out to differentiate its business by going after publishers. While magazines and newspapers have slowly made the transition from print to digital, they’re still coming to grips with mobile. For publications (big and small) to survive amid the industry’s declining ad revenues, it’s imperative for publishers to be able to push their content on every available platform, particularly tablets, the device that’s really best suited to consuming digital content.

So, GENWI developed a cloud publishing solution and mobile Content Management System (mCMS) that gives publishers an easy way to repurpose their content and create engaging mobile apps. The startup’s platform provides templates and tools that makes it easy for both small and enterprise publishers to customize both native and HTML5 apps, after which they can deliver their content across those devices without having to make changes to published apps.

By creating a flexible and customizable cloud-based mobile CMS and apps that don’t have to be resubmitted to app stores for re-approval (meaning that users don’t have to upgrade apps when small tweaks are made in design, etc.), GENWI’s platform has begun to strike a chord with publishers. The startup is currently powering 1,500 apps, while storing and delivering 90 million+ articles, 120 million+ images and serving over 6 million+ app views per month. Conde Nast, IndiaTimes, Moguldom Media, Forbes, PBS Kids and The Hollywood Reporter are all currently using GENWI to create, power and manage their mobile apps and mobile content. 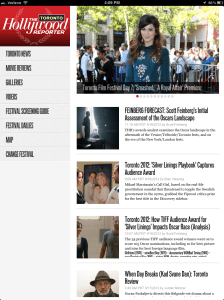 Over the last year especially, and with big names like Conde Nast signing on as customers, GENWI has taken big strides forward in terms of proving out its model and technology (not to mention growing revenues by 600 percent y/y and expanding its team to 24-strong). As a result, GENWI Co-founder Raju Sagiraju says that he thinks the business is at a point now where it’s ready to take on more fuel — with the goal of propelling the business into profitability.

That’s why the startup is announcing today that FLOODGATE and Elevation Partners, led by Mike Maples and Roger McNamee, respectively, are investing $2 million in equity in the startup. This follows the $4 million GENWI raised last October from Nexus Venture Partners, Inventus Capital Partners and Quest Venture Partners, bringing its total funding to date to $7.1 million.

Given that GENWI is so focused on publishers and content management, the investment from Mike Maples is particularly validating, as the investor (besides being the founder and managing partner of FLOODGATE) was an early investor in Twitter, making a bet on the company when it was still just a bare-bones microblogging service.

It’s also fitting because the Twitter model and ecosystem has obviously had a lasting effect on the way we consume media, as readers today want to find engaging content at Twitter-like speed. GENWI’s technology aims to enable media companies to give their readers access to that realtime, device-agnostic user experience — at scale. Something that is easier said than done, to put it mildly.

While enabling device-agnostic user experiences is important, there are a lot of DIY mobile app builders that offer similar functionality. So the real key to the platform, Roger McNamee tells us, is the way in which it decouples content and design in the cloud. This allows editors to manage content aggregation, creation, build content models and curate that content independent of having to worry about the app’s design.

On the flip side, designers can create and manage navigation and design in their apps using HTML5, CSS and Javascript. GENWI then brings together the two at runtime and distributes the content across devices, while delivering content targeted by geography, usage patterns or interest.

“What we have built for mobile is what Adobe should have built and has failed to do,” Gurumohan says, “a way to create engaging apps that offer both live content and dynamic interactivity.” 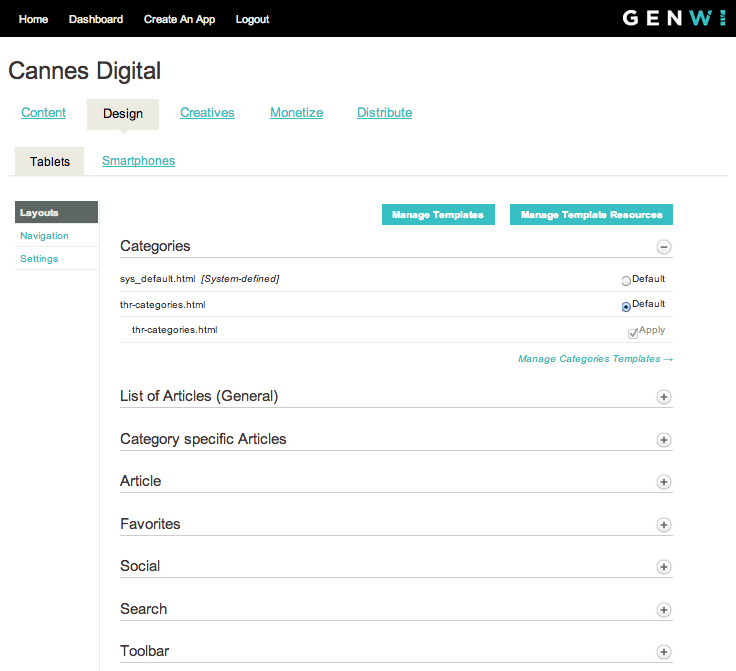