ReelSurfer, which graduated from Y Combinator’s most recent batch of startups, is a “tl;dr” for video. In other words, ReelSurfer was borne out of the frustration of trying to find quotes and scenes from their favorite movies on YouTube. Usually, these searches are fruitless. If you’re lucky enough to find a video that contains the quote or clip you’re looking for, you then have to download the video, convert it, clip the video around the scene, re-convert and upload it back to YouTube. But this is time-consuming and it, well, sucks.

So, ReelSurfer developed technology that lets you clip any video from any website, allowing users to edit videos right from their browser simply by entering the URL on ReelSurfer’s website or by using its bookmarklet. Users can then combine and organize clips into reels and share with friends on their social network or website of choice.

Don’t let its simplicity or niche use case fool you, ReelSurfer has a lot of potential in its ability to transform everyday consumers into video creators, curators and mashup artists. That potential was officially validated today, as co-founder Neil Joglekar tells us that his startup has raised $880K in seed funding to continue building out its product — and team. Investors in the round include The Otto Group, TriplePoint Capital, Y Combinator and a number of angel investors, including William Fay, the executive producer of The Hangover, 300 and Independence Day.

With the round of funding in place, ReelSurfer has been building out a number of new features to improve the usability of its site. Users can create “reels,” or collections of videos on the site, remixing content, creating mashups or just collecting your favorite videos in one place. Up until recently, users could only share their reels one clip at a time, but ReelSurfer has now updated this feature so that you can share entire reels on Facebook, Twitter, via email or embed, with clips and reels playing inline on Facebook.

Another handy update to ReelSurfer has made it so that when you’re clipping longer videos, you don’t have to navigate to the right moment by dragging start and end points — users can now press the “A” and “S” keys on their keyboard to adjust start time by a second or use the “D” and “F” keys to adjust the end point.

ReelSurfer also improved the play-back feature of its videos, so that clips play instantaneously back-to-back so that you no longer have to wait for the next video to upload.

With this functionality in place, ReelSurfer is today teaming up with Orrick (on of the biggest law firms in the country) to run a video mashup contest. To participate, contestants are asked to cut clips from videos all over the Web and put together a reel that centers around the contest’s theme: Startup advice. Reels can be entertaining, funny, sad or just plain awesome. As an example, the ReelSurfer co-founder offers up “How to Pitch Successfully” and “Fundraising Advice.”

The contest will have three grand prize winners, each of whom will receive a 30-minute meeting with a VC. As of now, participating investors include Garry Tan from Y Combinator, Alex Niehenke from Crosslink Capital and Kristen Green from Forerunner Ventures. To enter, check out ReelSurfer’s blog post. 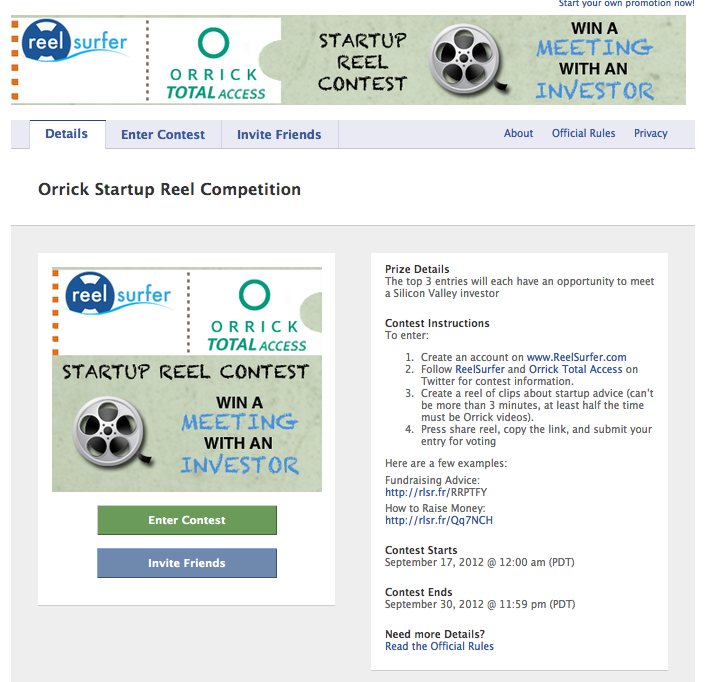