Final update: GoDaddy is up, and claims that the outage was due to internal errors and not a DDoS attack.

According to many customers, sites hosted by major web host and domain registrar GoDaddy are down. According to the official GoDaddy Twitter account the company is aware of the issue and is working to resolve it. Update: customers are complaining that GoDaddy hosted e-mail accounts are down as well, along with GoDaddy phone service and all sites using GoDaddy’s DNS service.

Update 2: A member of Anonymous known as AnonymousOwn3r is claiming responsibility, and makes it clear this is not an Anonymous collective action.

I’ve been adding more information below as details emerge.

AnonymousOwn3r’s bio reads “Security leader of #Anonymous (~Official member~).” The individual claims to be from Brazil, and hasn’t issued a statement as to why GoDaddy was targeted.

Last year GoDaddy was pressured into opposing SOPA as customers transferred domains off the service, and the company has been the center of a few other controversies. However, AnonymousOwn3r has tweeted “I’m not anti go daddy, you guys will undestand because i did this attack.” 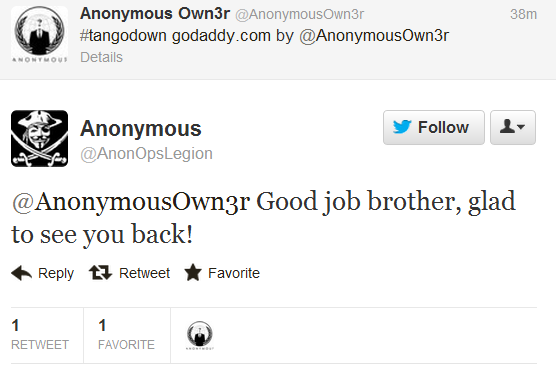 The service Down For Everyone Or Just Me says the GoDaddy company website is down as well, but I’ve been able to access it just fine. However, it does indeed appear that sites hosted by GoDaddy are down — including those who only have their domains registered through GoDaddy but use other hosts.

For example, I’m seeing a database error on couponpuppet.com, one of the customers complaining about the outage on Twitter.