DeveloperAuction has built what they call the “first transparent marketplace for recruitment,” allowing engineers to put their talent up for auction from startups that need talent.

In the company’s first auction, which ended August 31st, 88 engineers put themselves up for auction and 142 startups, including Quora and Dropbox, submitted over $30m in job offers.

“We help developers get paid what they’re worth through a competitive process,” says co-founder Matt Mickiewicz. “Engineers get approached by start-ups and recruiters dozens of times a year, the problem is sorting out which opportunities are worth pursuing. With DeveloperAuction we’re flipping the traditional model on its head, by having employers submit offers first, and interview later.”

Engineers have no obligation to accept the highest offer, but startups are required to honor their highest bid if follow up, in-person interviews are successful and they want to make a hire. 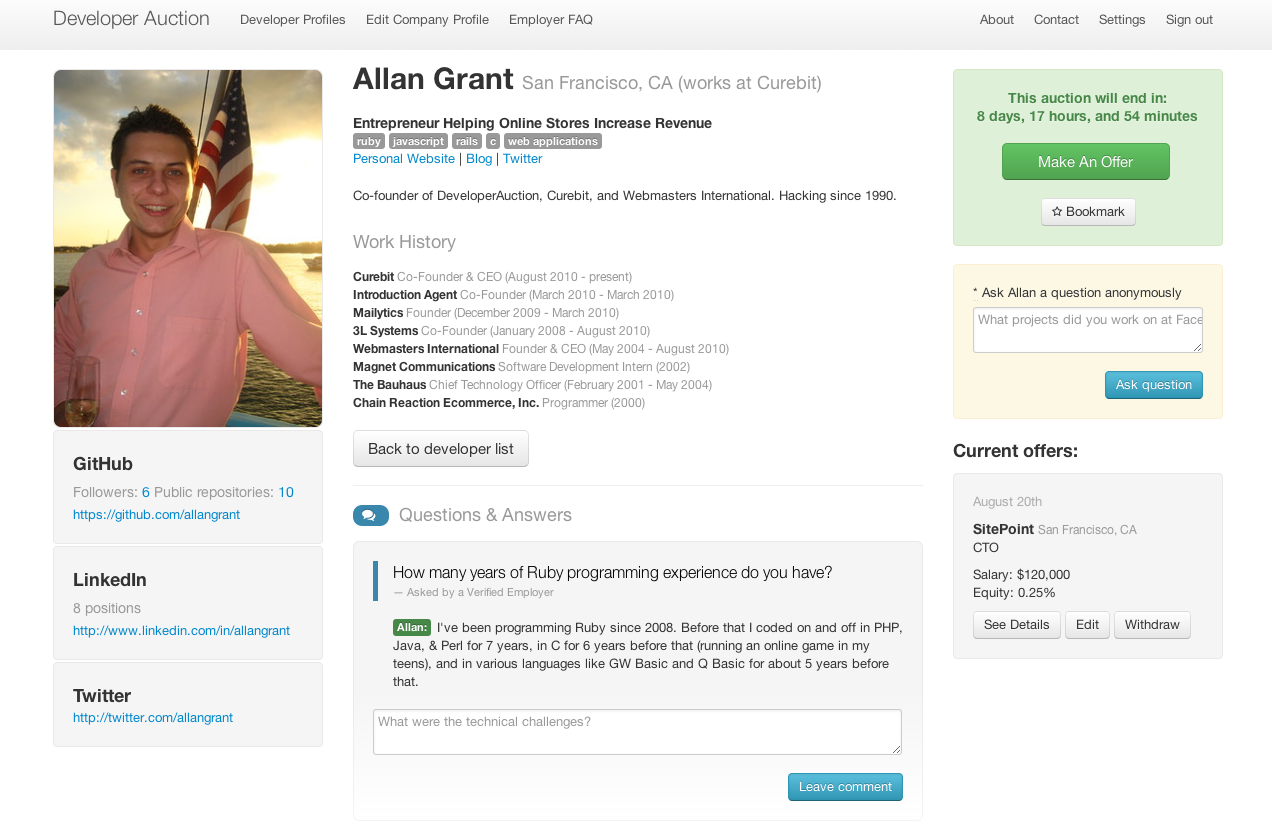 The auctions run on two week cycles for the entire site. The company says the next one will go live in mid-September and run until the end of the month.

DeveloperAuction says it is accepting applications from developers with “notable GitHub profiles,” CS degrees from Stanford or MIT or currently employed at Google, Zynga, Facebook, Twitter, Apple, Yelp and Square for upcoming auctions.

“We have had great experiences with DeveloperAuction,” says Stew Langille of Visual.ly. “We are hiring two guys from them. They have a ton of supply and the process is very fluid. I have dealt with many recruiters in my day and they are either ineffective or super busy and expensive. These guys make the process fast, efficient and affordable.”

The company was founded by Matt Mickiewicz, co-founder of 99designs, Allan Grant of CureBit and Doug Feirstein, founder of LiveOps and uSell.

“They did a wonderful job of curating the folks on the list,” adds Arjun Dev Arora, founder and CEO of ReTargeter.com. “Not quite sure how they did it but the engineers on the platform are very high quality.”

Mickiewicz says there have been “zero issues” with employers seeing their own employees on the site. The company manually verifies employers via AngelList and only lets approved startups, defined as having raised capital or being profitable, browse engineer profiles. He adds that the company can add filters so employers won’t be able to see their own employees, but notes that it “hasn’t been an issue so far,” due to the selectivity of the platform.

Mickiewicz tells me the company, which currently only covers the Bay Area and Boston, is excited about branching out to other cities, specifically noting interest from start ups in New York and Denver.

“While Developers are a logical starting point, we think this model will work in any area where demand far outstrips supply,” Mickiewicz says. “The logical job titles to tackle next are UX/UI Designers, Growth Hackers, and Senior Marketers and sales people.”