As a small startup, the mobile payment space shouldn’t be appealing. Every carrier and credit card company seems to have its own system, the space is fragmented, crowded and no standard for payment mechanisms has emerged. (QR codes, really?) To compete, startups need lots of capital, and then they need hardware.

Which is why you have to give LevelUp some credit. Since relaunching its mobile payment and loyalty solution in October, the startup has raised $31 million from the likes of Deutsche Telekom, onboarded 3,600 merchants (with 800 signing on in August) and eliminated the transaction or “swipe” fees that cost merchants $50 billion each year.

But if it really wants to solve the mobile payments conundrum, LevelUp has to support every method people use to pay with their phones — to be payment agnostic. It’s a tall order, but today the startup added another big piece, announcing new hardware that supports NFC payment for any phone with NFC capabilities.

The iPhone 5 will be unveiled next week and rumors have suggested that the phone is likely to come with an NFC chip. LevelUp’s announcement is thus timed appropriately, as Priebatsch tells us that if the phone does have NFC capability, they look prescient (especially if Apple’s market-shifting ways do the same for NFC) and, if not, they’re still early to market and can take their time rolling out the new hardware.

LevelUp’s first few generations of hardware are already in use among merchants and were developed in conjunction with T-Mobile, which lent its infrastructure and hardware to the startup’s mission. Since Deutsche Telekom (which owns T-Mobile) invested in LevelUp, the startup has worked even more closely with the telecom company to produce its hardware.

The new hardware, which will be free to merchants, supports both NFC, QR code and magnetic strip scanning, so that even if the iPhone 5 doesn’t have NFC, anyone with NFC-enabled Android phones or with any smartphone can pay using the startup’s new terminals.

While Priebatsch did admit that, as trends go, NFC has mostly been hype rather than something people regularly use, he justifies the move by saying that now is as good a time as any. The startup doesn’t plan to slow down with its scaling any time soon, so better to begin rolling out the new terminals before it becomes a bigger, costlier undertaking. (Priebatsch says the company’s goal is to have 6,500 merchants onboard by the end of the year.)

In an effort to be as agnostic as possible to whatever mobile technology wins the mass-adoption race, the startup has also designed the white casing around the terminal so that merchants can easily pop it off. And, if, say, Bluetooth 4.0 turns out to be the winner, Priebatsch says that the hardware makes it easy to open up and slide in a new chip. With telecom hardware backing, the founder thinks this gives them a competitive advantage, as they’ll be able to cheaply upgrade merchants in the event of a Bluetooth winner.

For merchants, the current terminals come with a USB cord outlet so all they have to do is plug-in their POS system, and they’re up and running. If they don’t have a POS system and are just working with a cash register, they’ll need a network connection and a keyboard input — essentially, they’ll need to purchase a tablet. But that’s about the only friction. For the consumer, using the payment network remains relatively unchanged either way.

As of now — though an iPhone 5 with NFC could change things — LevelUp plans to beta testing its new NFC-capable terminals in Boston over the next few months and get all of its merchants upgraded by the end of the year.

Of course, while nixing its 2 percent transaction fees and offering free hardware upgrades is appealing to merchants and certainly brings competitive advantage, LevelUp still has to make money. That’s where the loyalty part of its business comes in. The startup offers a number of customer acquisition and loyalty programs for its merchants, and every time a customer redeems an offer, coupon or deal, for example, LevelUp makes 35 cents on every dollar made through the campaign.

One merchant campaign Priebatsch says the team plans to roll out later this year involves birthdays. Merchants will tell LevelUp that every user that’s spent, say, $25 with them this year should get a $5 coupon in their account. It’s a way for merchants to say thank you to repeat customers, who are thrilled at the merchant’s thoughtfulness and get a free five-spot. Every time they redeem that coupon, LevelUp gets paid. And for all their campaigns, “experimental” or otherwise, the startup tracks redemption, how much they spend at the store so that merchants have a sense of how much value the campaign is actually creating.

The elimination of the processing fees brought LevelUp’s merchant participating in campaigns up to 96 percent. So, although it would seem shaky to rest the entire monetization structure on loyalty-type programs, the large majority of merchants have bought in. So far. Though it will require a lot of customer service, analytics and variety in campaigns to keep merchants happy and to generate revenue, but LevelUp looks to be making the right moves at this point. And if it can continue bringing on big chains and retailers, the idea itself (and no processing fees) might not be so crazy after all.

NFC iPhone 5 or not. 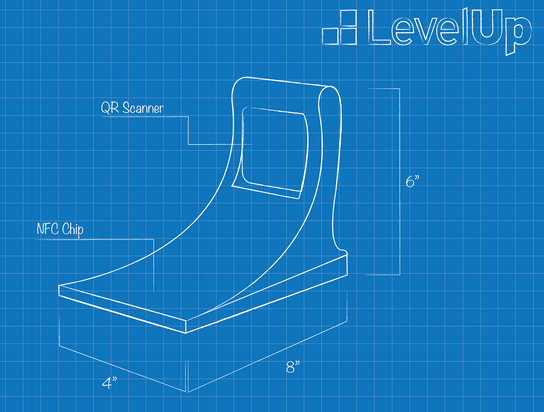