Back in July, Dalton Caldwell (of imeem and picplz fame) announced an “audacious” goal: To create a better, developer-and-user-supported (and ad-free) alternative to Twitter. And so App.net was born. About a month later, the subscription-based, third party app-supporting Twitter clone reached its fund-raising goal of $500K — all of which came from a community of 7,500+ enthusiastic supporters.

Though the service has a long way to go before it can compete with the big boys, today, the App.net founder announced some milestones that show it’s making some solid progress. Over 250K posts have been created in the 7-weeks since App.net’s debut, with some 50 percent of posts coming from third-party clients. As of August 28th, the service has over 17,500 (paying) users, which works out to about 14 posts per user. Not only that, but as reported by The Next Web, today the service’s first dedicated iOS client officially hit the App Store.

Twitter has ticked off many users and developers with the changes it’s made to its service in an effort to monetize (ads, changes to its API, etc.), and App.net is well-designed and clever response both for and from that disgruntled minority. MG Siegler and Romain Dillet have already weighed in with in-depth analyses detailing the challenges that lie ahead for App.net.

But for those unfamiliar, it’s really just an ad-free version of Twitter, which users can pay $50/year for access or $100/year for access to developer services. The main difference being access to an API, which will let developers integrate services with App.net’s data, create hybrids of the service and build a big ecosystem of third-party apps. 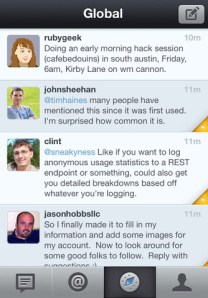 To that point, today the App Store saw the debut of the service’s first dedicated iOS app: AppNet Rhino. As Martin Bryant pointed out, this isn’t the app to support App.net (Buffer wins that medal), but it is the first to be built from the ground up for the service — and win the race to the App Store.

AppNet Rhino is a collabo project Planet 1107 and TwinkleTap and allows users to view both personal and global versions of App.net’s feed. The app allows you to follow and unfollow other users, view profiles, posts by anyone mentioning a particular user, reply with a swipe gesture on individual posts, view full conversations and open links without leaving the app.

As you can see, the app is pretty straightforward, and, though it won the race for Apple’s approval, there’s no doubt more App.net clients are in the works, some of which may offer more functionality and point-by-point improvements to the Twitter experience.

But it’s another milestone reached by the service (along with the recent announcement that it had added annotations allowing developers to attach metadata), and it’s great to see the service finding solid user and post growth along with the appearance of its first dedicated client.