Foursquare has revamped the experience of its app from the perspective of its users on both the consumer and merchant side. And on Wednesday, the company is pulling back the curtains on a long-awaited feature for all Foursquare watchers: Revenue generation.

Foursquare is announcing today the pilot launch of “promoted updates,” which will let companies issue messages about deals or available products to Foursquare users.

These new updates will come in two forms: Promoted updates, such as Gap saying, “We have new yoga pants!” — and promoted specials, such as Walgreens saying, “Foursquare customers get 10 cents off of shampoo.”

According to Foursquare’s chief revenue officer Steven Rosenblatt, Foursquare’s major focus with these updates are that users actually find them to be worthwhile — which is why they use the same technology to make sure they’re targeted to users specifically based on their locations and interests, just like the Local Updates are. “What we’re really excited about is that you have to be near a business to get an update,” he said in an interview today. “No matter how much someone pitches us, it has to be relevant, based on proximity and based on intent. Those are critical.”

For now, promoted updates are available only to the 20 or so companies participating in Foursquare’s pilot program. Those include big companies including Gap, Best Buy, Hilton, and Walgreens, and relatively small businesses such as Butter Lane and ‘wichcraft. All these companies are paying Foursquare on a “cost per action” model, not based on how many views, or impressions, their updates receive.

While it’s big news in some ways for Foursquare to be making money at all, Rosenblatt would not give details on when Promoted Updates will be available to all businesses on the Foursquare platform. “It’s really dependent on the learnings we get and the experiences we have. We want to make sure we really perfect it,” he said. “This will evolve, and as it evolves, when we feel ready we can open it up.”

It’s certainly a start, and it will be interesting to watch how it opens up to paying customers. Here are a couple screenshots of how Foursquare’s promoted updates will appear in consumers’ streams (click to enlarge): 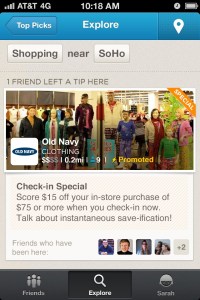 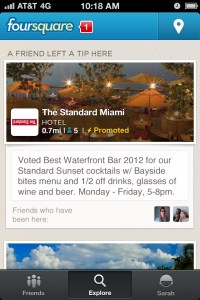 Also, last month TechCrunch TV talked with Foursquare founder Dennis Crowley about the recent revamp of the company’s consumer app and its push toward revenue generation. You can watch that interview in the video embedded below: