Twitter is adding more features for iOS and Android today, allowing users to receive push notifications from tweeters they select, giving users the ability to expand tweets on their phone, improving search results and supposedly providing a better user experience for events. 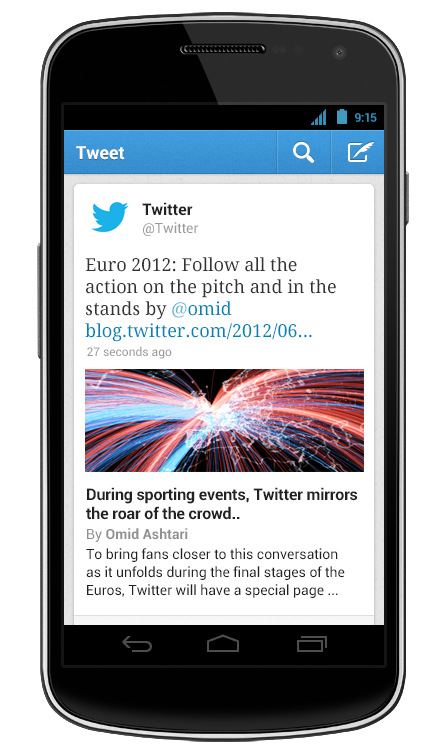 The major upgrade is push notifications. While users could previously receive updates by SMS, they can now adjust their settings to receive push notifications whenever their favorite users tweet or re-tweet. The expanded Tweets, previously only available in web browsers, allows users to see more media right beneath the Tweet.

Besides being a #NASCAR advertisement, it’s hard to tell what the major event upgrade is. “Now you can discover the best Tweets and photos for event experiences like twitter.com/#NASCAR on your iPhone. Now, Twitter for iPhone complements any live event, whether you’re watching from home or from the stands,” the blog claims. But this was true for Twitter as soon as it launched. You could always search for #Giants etc. when at AT&T Park or watching on TV to experience the live event.

The improved search is still vague at this time, as Twitter only writes, “we’ve made major improvements in search autocomplete so that you will see more suggestions when you search for people.”

Update (12:56 PM): This upgrade comes on the heels of Friday’s search improvements, which added related results and a filter for results from people you follow, as well as other changes. It appears as though the event improvement is that the app now supports event pages, aggregations of the best tweets and photos of an event.

There are also reports of several smaller upgrades in the new version: you can reach a user’s page by simply tapping on their Avatar, there is support for personalized trends, the new Twitter bird the company released in June replaces the old one and there is added Hungarian language support. There are also ambient notifications for iOS users that post brief, “non-interruptive” notifications in the status bar when the app is open.

Update #2 (1:30 PM): Some users are having difficulty loading expanded tweets after updating. I personally updated my Twitter app and did not see expanded tweets. Reader @joedinardo tweeted, “Wanna know what’s weird? The new app functions dont work on the tweet linking the story on the new app functions” Meta. Joe was kind enough to send a picture.