Archimedes Labs, a Palo Alto incubator, has made its largest startup investment to date, backing mobile web development startup M.dot. Neither side would disclose financial details. M.dot is still in private beta testing, and co-founders Dominik Balogh and Pavel Serbajlo tell us they plan to launch this fall.

M.dot is a free app that allows users to build a mobile website from scratch or a mobile version of their existing website.

“Mobile will probably disrupt much of what we know of web 2.0,” Keith Teare, a serial entrepreneur and co-founder of TechCrunch, tells us. 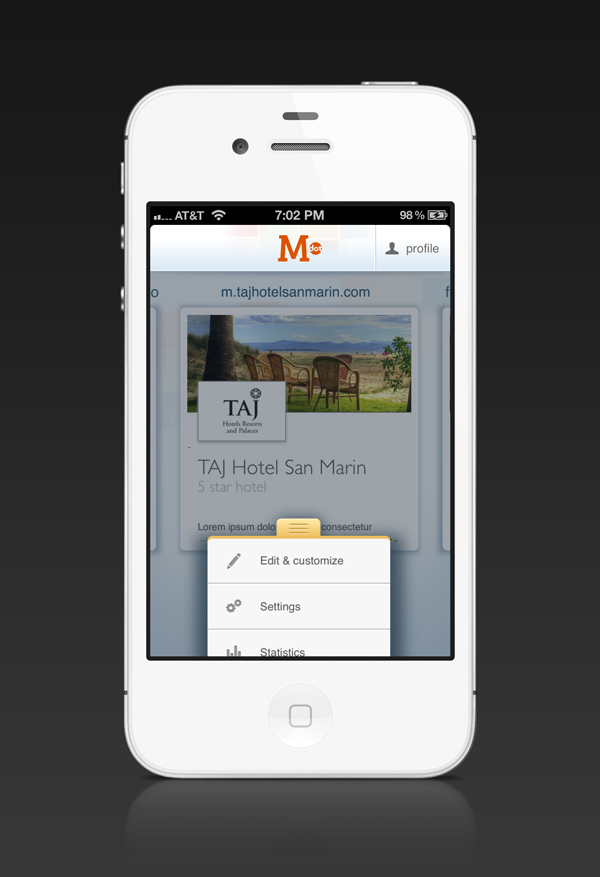 Balogh and Serbajlo showed me a beta version of the app here in our TechCrunch office. I was surprised by how simple and intuitive it is to use.

“We know people don’t like to enter a lot of information on their smartphones,” Serbajlo explains as he shows me the GPS features. “So we’ve made it very simple.”

The app has preloaded templates with easily customizable features like store hours, location and price lists for small businesses, which they are targeting. They also have a blog feature which allows users to write and insert pictures and video. Its integrated with Facebook, Twitter, Flickr, YouTube and Dropbox so users can easily add their own media to the site or blog. Serbajlo said they are also working on a feature that scrapes pictures, logos and text from a user’s existing website to use in M.dot.

The two explained that M.dot’s primary use is for mobile websites, but they hope people end up using it as their main site. The coding has been optimized for smartphones, but looks clean and appealing in a web browser.

M.dot is entering a very competitive market with large, established companies like dudamobile, which has partnered with Google Mobile (GoMo), Weebly, Wix and goMobi. Balogh and Serbajlo claim that because these competitors are all on the web, not mobile apps like M.dot, their businesses will be completely different and they will have a competitive advantage.

The pair is using a “freemium” business model, offering the app and its features for free; free sites will be on a M.dot domain, like “domainname.mdot.go” and users can pay for their own mobile domain, such as “m.domaainname.com.” The app also supports “www” domain names. They will also charge for premium features and templates, although those have not yet been released. Balogh said they have already had some interest for acquisition, but he could not disclose any details.

Balogh and Serbajlo met two years ago and had been working on an application called Webie that allowed users to build a website from their mobile phone. They met Teare this past winter and he helped them pivot and rebrand the idea as M.dot.

“Actually what you’ve built here isn’t really a website,” Teare recalls telling them. “If you look at what you’re actually doing, you’ve actually built a pretty awesome mobile site that you’re calling a website. If you could rethink your story and talk about this: making it as easy to build an m.dot as it is to build a www, then you would have something.”