Angel investing may be hot, but it looks like things are not too shabby for the tech industry’s most powerful late-stage venture capital firms either.

Institutional Venture Partners (IVP) is announcing today that it has closed on $1 billion for its 14th fund, dubbed IVP XIV. This represents the largest-ever fund IVP has raised in its 32-year history. To date, this brings IVP’s total committed capital to $4 billion.

As is sometimes the case with later-stage investors, IVP has flown under the radar a bit compared to other VCs that get into tech companies earlier and more often. But nevertheless, the firm’s portfolio speaks to its clout: ComScore, Juniper Networks, MySQL, Seagate, and Zynga are among its past hits, and Buddy Media, DropBox, Twitter, and Hipmunk are among its current investments.

We at TechCrunch TV were pleased to have the opportunity to interview IVP general partner Jules Maltz about the brand new fund. Watch the video above to hear the first-hand scoop all about IVP XIV. Here are a few key takeaways from our chat:

Late Stage Is Still The Focus

The new fund may be bigger than its ever been for IVP (the firm’s last fund before this was $750 million) but according to Maltz, the firm’s focus will largely remain the same. Maltz said:

“Essentially it’s going to be the same strategy. We’re a late stage firm, we’re very focused. We only do tech investing. We don’t do China, we don’t do clean-tech. We really want to focus on the 10 to 12 fastest growing, most prominent late stage tech companies each year, and fund those businesses.”

On Bigger Investments, And Follow-On Funding

But there is one benefit that deeper pockets brings, Maltz said — the ability to invest more into each company. He continued:

“I think what this fund allows us to do is invest larger amounts in some of those best-performing companies, and actually follow on to some of our most promising companies after our initial investments. So we can now invest from $10 million to $100 million over the life of the company.”

Venture Stage: For IVP It’s More Than Just A Letter

Maltz explained that being a late-stage venture firm does not always mean that it only participates in Series D and above funding rounds. For example, he led IVP’s investment in DropBox, which has only had two rounds of venture capital funding.

“We try to not actually focus on letters of the alphabet, whether it’s an A through a Z investment. We really try to focus on what’s the fundamental characteristics of the business and is that a late-stage business.”

And while infographics can be overdone, IVP had a pretty handy one whipped up that give a quick look at its credentials. The full one can be found on its website, but here are a couple especially key bits I clipped from it (click on each to enlarge): 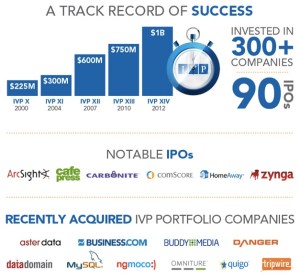 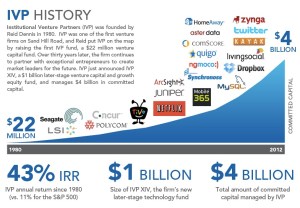