In response to Facebook’s ever-expanding social universe and the success of mobile-focused networks like Instagram, Dave Morin and company have turned Path into a more personal, mobile-centric social network.

Most of the life-sharing that happens on Path takes place at home — among family and close friends. And while some users may speak one language away from home or at work, they want to be able to converse with loved ones in their native tongue. As a result, Path has been on a mission to expand the number of languages it supports so that users can speak in whatever tongue they please.

Tonight, via its blog, Path has announced that it has added seven new languages to its stable, including Dutch, Norwegian, Traditional Chinese, Thai, Bahasa Indonesian, Malay, and UK English.

As American-born companies extend their networks to reach an increasingly mobile audience abroad, localizing product experience is crucial. International users don’t want to feel that they’re being pandered to, and they’re not eager to jump on board if the experience feels like it’s just a slapdash port aimed at boosting download stats. 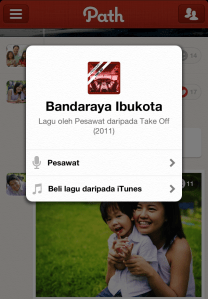 Path remains a small team based out of San Francisco, so it turned to its users to help translate and localize the app’s experience for its international users. Though it admits that it’s still very much a work in progress, the goal is an important one.

After raising over $30 million in funding in April, it seems that Path has begun aggressively focusing on international scale and expanding localized support for its 3 million-plus users. This was made even more evident when Path nabbed Shakil Khan from Spotify this spring. At the time, Spotify CEO Daniel Ek told ATD’s Kara Swisher that, while he is sometimes an introvert, Khan “is definition of social, so he was the link to the rest of the world in many ways for me and for the company.”

While Khan remains an advisor to Ek (and is an investor in Spotify), Ek said that he thought Khan was a great fit for the sharing-focused network, as he helps Morin and team transform Path into a global network — and capitalize on the strong growth its been seeing overseas of late, especially in Asia.

In addition to a renewed international focus, Path has also begun adding more functionality and features around health tracking and music. While the majority of Path shares revolve around photos, Path recently integrated with Music Match and the Nike+ fitness platform to allow its users to share what music they’re listening to and brag about how many jogging miles they’ve logged.

Having globally-recognized brands like Nike on board will be key to Path’s long-term success, especially as it attempts to recruit new international users and localize its mobile sharing experience.