Today at Google I/O, Google announced Smart App Updates for mobile so users only have download changes, not an entire app over again to update. Smart App Updates are just 1/3 the size of a normal download so they save data and battery life, and are available from Gingerbread and above.

For users of the new Android OS 4.1 Jelly Bean, app downloads are now encrypted. Meanwhile for developers, there’s Google Cloud Messaging, a free system for delivering Android notifications, plus several other new tools. And to give you an idea of the scope of the Google Play media and app store, Google announced it now has more than 600,000 apps, over 1.5 billion app installs per month, and over 20 billion app installs total. Seems the rebranding is going pretty well. Beyond total apps and installs,

Google provided some stats on the growth of Google Play abroad, and how its payments are evolving. There are free apps in 190 countries and paid apps in 132. More than 50% of apps now use in-app billing, and Google will be pouring resources into improving subscription billing, expanding carrier billing, and giving devs better metrics. 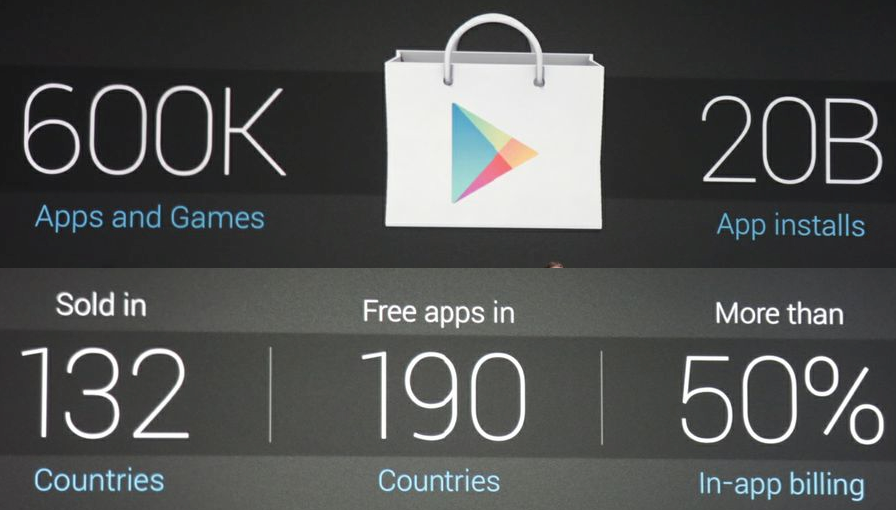 Many people don’t update their mobile apps frequently because re-downloading big ones can take time, sap your mobile data if you’re not on wi-fi, and suck precious battery life. That means people aren’t getting new features, bug fixes, and as good of an experience as possible.

Google announced Smart App Updates today to easy the pain of keeping your Android apps current. Instead of re-downloading an entire app when it needs an update, Smart App Updates let you just pull the changes to the Android application package file, so the downloads are roughly 1/3 the size. 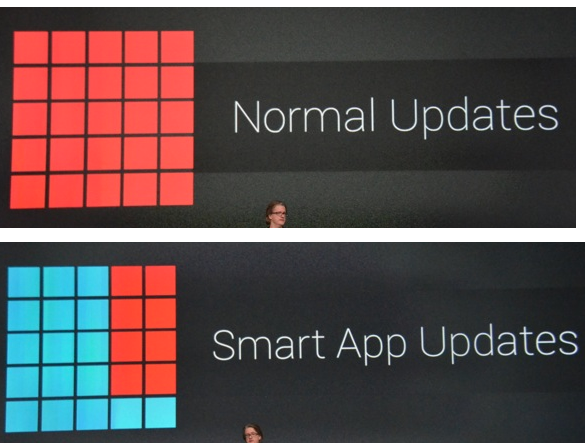 To improve security and make sure no one knows what you’re downloading, Google now offers app encryption. The means app downloads are encrypted with a device-specific key before they’re delivered to a user, though this will only be available for Jelly Bean and future Android operating systems.

Oh Yeah, This Is A Developer Conference

Not everything today was user focused. Several new developer tools were mentioned, including APK expansion files, a “ready to review” designation, Android training for devs, and improved analytics.

Featured, though, was Google Cloud Messaging. This makes it cheap and easy for developers to deliver notifications to their Android users. It’s totally free with no quotas, and the developers at I/O clearly loved it, given their massive applause. 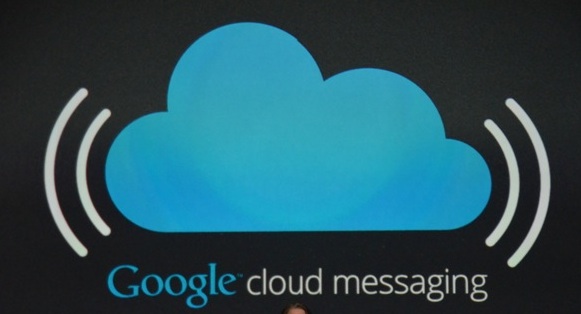 Google has had some trouble finding an identity for its app store, switching the name to Google Play from Android Market earlier this year. But Smart App Updates in particular give it a least one advantage over the Apple App Store — at least for users. What I really want is auto-updates for apps, but making them smaller and faster is a good first step. Still, none of today’s updates seem substantial enough for Eric Schmidt to make good on his promisethat developers woud start prioritizing Android over iOS.