Unroll.me launched in private beta a few months ago to help end email fatigue — specifically that which is linked to all the email subscriptions that users sign up for and forget about. That includes all the daily deals, travel promotions, and the like that you don’t necessarily want to have clogging up your inbox, but also don’t want to completely unsubscribe from. Now the site is opening up to all, with a whole new redesign and workflow for rolling up unwanted email.

Unroll.me has come a long way since its last iteration, and the redesign fundamentally changes how it treats users’ email. The old Unroll.me worked by showing users all the subscriptions they were signed up for and then allowing them to either delete and unsubscribe, or to add them to a global rollup, basically allowing users to “opt out” of receiving promotional emails in their inboxes. The new Unroll.me works a little differently — once you’ve signed in, the service rolls up all your subscriptions and then it’s up to you to unsubscribe or “opt in” to receiving emails in their inbox.

Users receive a daily digest of all emails that have been rolled up, which now provides a pretty slick timeline of all the stuff they don’t get in their inboxes anymore. Clicking through the digest takes them to the Unroll.me site, which lets them drill down through multiple days’ worth of email subscriptions all at once. It also lets users browse through their subscriptions based on category — for instance, allowing them to check out all emails with travel offers. 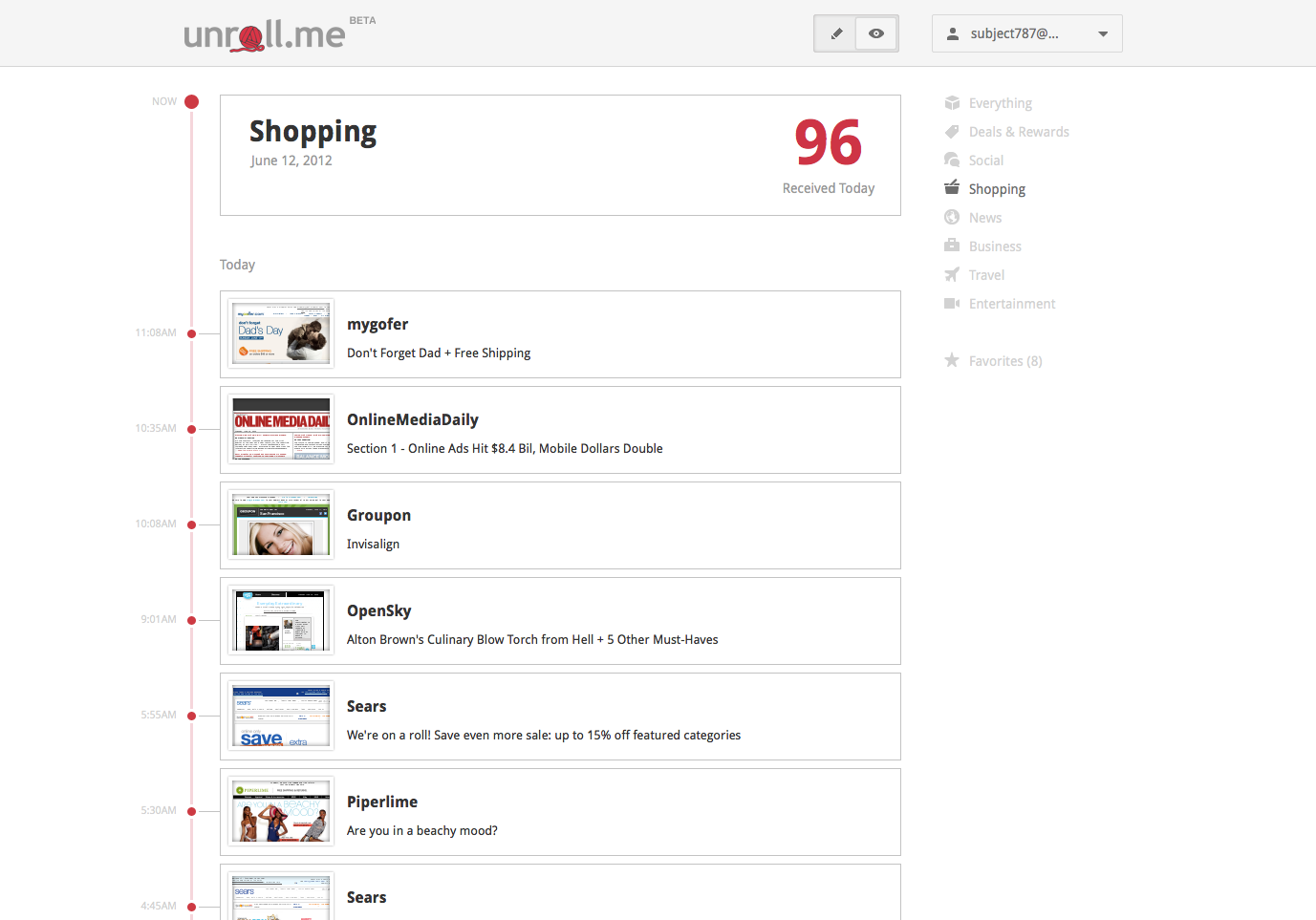 It’s an interesting approach, especially since new users might not be aware at first that the stuff which Unroll.me has rolled up won’t be seen unless they specifically choose to have it appear in their inboxes. For Unroll.me the approach is an effort to “build engagement” — that is, to get users not to just set it and forget it, but to actually show up on the site and check out their daily digest at least once a day.

The good news is that for users, that means never receiving another marketing email in your life, according to Unroll.me CEO Josh Rosenwald. That is, unless you actually want to receive them. But I could see the process being confusing and could see users accidentally rolling up important emails — notices of credit card payments due or other things like that.

The New York City-based startup was founded by Rosenwald, Jojo Hedaya, Steven Greenberg, and Perri Gorman. Those guys have been bootstrapping Unroll.me but have recently hired a designer and a couple of developers. Now that the site is live, they’re looking to raise some venture capital. Hopefully they won’t lose emails from interested investors in their daily digest.