tape.tv has been around for a while – since July 2008 to be exact. It operates like a mix between an online version of MTV and Pandora. Just like the latter service, on Tape.tv users can skip, like or dislike the videos as they play, so the service starts to tailor itself to their tastes. I came across it in various visits to Berlin over the last couple of years but have been frustrated that this great service has only been aimed at the German market.

However, I’m excited that it’s about to scale into new countries. The company has now raised €5 million ($6.2 million) in a Series B funding round. Participants include Atlantic Capital Partners GmbH , Dario Suter, Christoph Daniel and Marc Schmidheiny (DCM), prolific Berlin Angel investor Christophe Maire, alongside Investitionsbank Berlin and VC Kreativwirtschaft Berlin. The cash will be used to scale the business, appear on other platforms like smart TVs and launches into France and the UK in early autumn. The relaunch will also see the creation of an electronic program guide (EPG) for their own live shows and events. 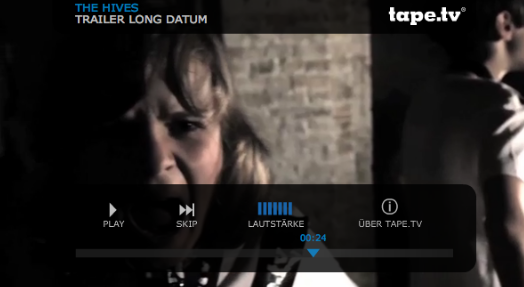 Its tape.tv’s catalogue of 45,000 videos has attracted around 3.5 million users in Germany, Switzerland and Austria, its main markets since it launched in July 2008. The company managed to navigate the tricky music licensing laws in Germany, which has seen YouTube hobbled in some areas.

Founded by Conrad Fritzsch (CEO) and Stephanie Renner, Tape.tv plans to have an editorial team in each region it launches in, programming its sub channels, like Indie and Hip-Hop.

Fritzsch says the company is now aiming at the convergence of Internet and TV towards SmartTV and hopes to extend to mobile as well. “The future of tape.tv will also be more social, based on user behaviour” he says.

The company has 65 employees, many of them selling ads around the videos, and also has a real TV show on on the ZDFkultur channel in Germany. But it’s a lucrative business. It’s claiming to be running on €20 million in annual revenues.

In Germany it has plenty of strategic partners, including ZDF.kultur, bild.de und spiegel.de and apps with Facebook, Spotify and Last.fm.